(early June 2015)
Tears welled up in my eyes this morning.  As I dropped Griffin off for his first day of a week of Mini Sports Sampler Camp, he hardly looked back.  As he put his water and hat in a particular spot so he could find them, I gave him a kiss and said I love you and he took off with a ball and over his shoulder called, "I love you too, Mom!"  I am so amazed at the independence and confidence he brings to new situations.  His love of sports, play time and being social allows him to jump right in and be away from me for three hours while he has a blast.  He is so trusting of me that I would put him in activities he will love, and he thrives. 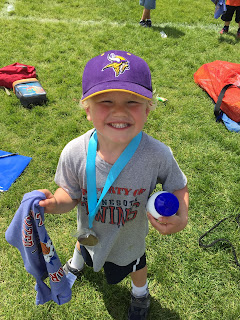 His independence has translated to his role around our house.  He is increasingly more confident doing things all by himself-brushing his teeth, picking out his clothes, turning dirty socks right-side-in and wanting to play in the back yard while I prep dinner. 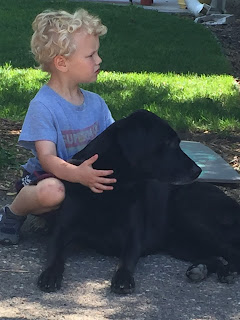 His independence is something I rely on.  With two other littles who still require much of me, he is more than a helper.  But, this week I saw a bit of his baby-ness slip away.  He's a little bit more of a kid.  He's a little closer to going to school, hopping on the big yellow bus which I'm sure will elicit many tears (more likely from me), and gaining even more independence.  It is so odd already the feelings of wanting to protect him when he tells me stories of someone who didn't want to play with him, someone who took the ball from him, or someone who said he was too little to do something.  This new phase of life will definitely be more of an adjustment for me than him. 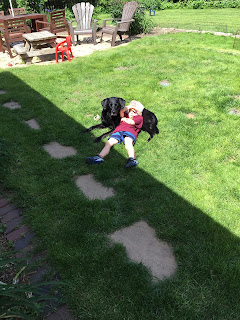 They are babies for such a short time and I'm trying to savor the moments that he needs me, wants to be near me and likes playing with me.  Griffin, you will always be my baby.  Big or little, old or young, please don't grow up too fast, I'm just not ready, yet.