This project has been a year plus in the making.  Well, much longer if you include the time that we got this table (gifted to us from family friends) and I knew that I liked how it fit the space but wasn't quite exactly my style. 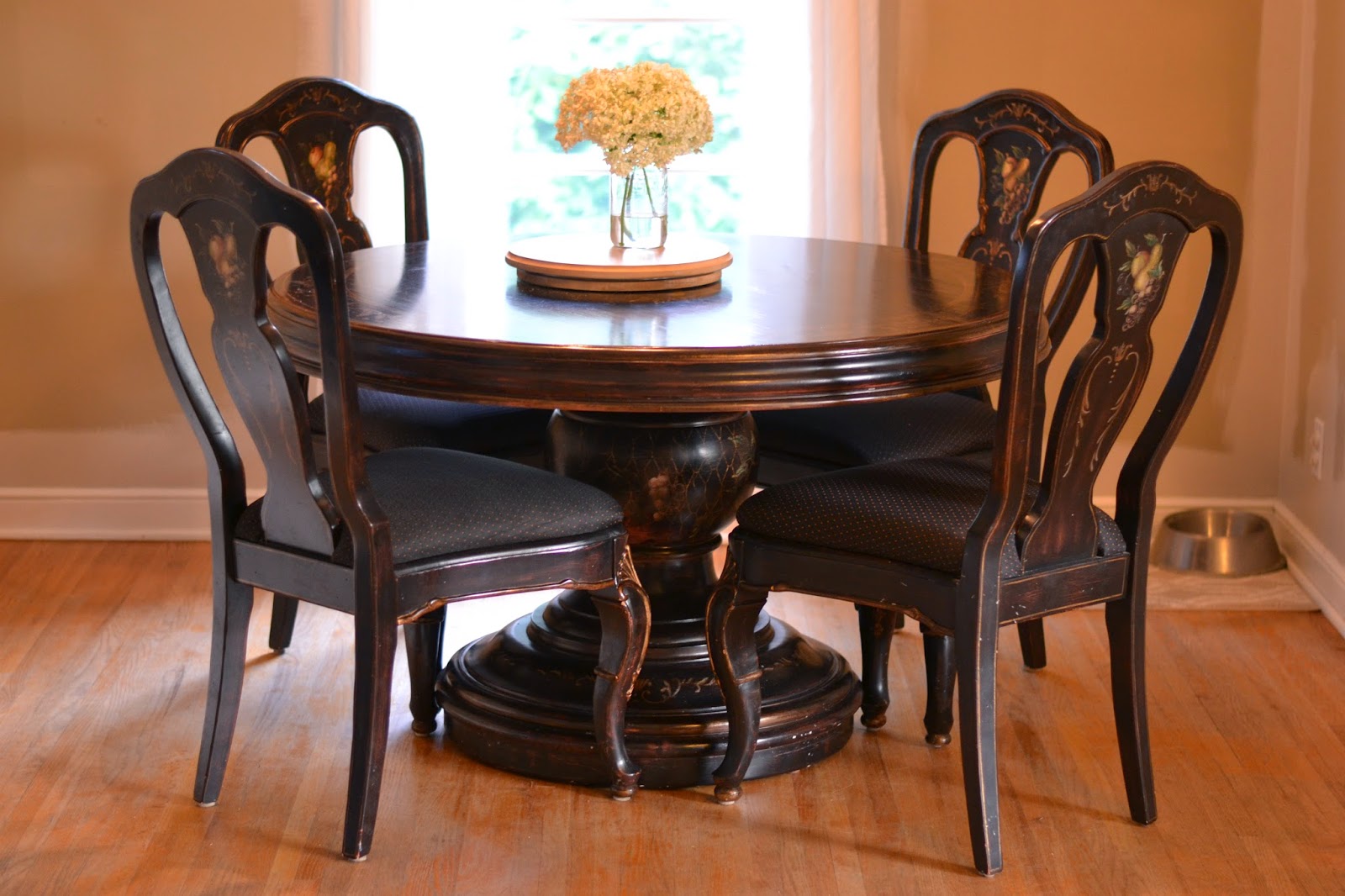 Enter curb alert.  Well, technically it was a walk with my kids in my neighborhood in which we stumbled upon this beauty...thrown in shambles to the edge of a yard of a house about to be torn down.  The last time I saw a table on a walk with my kids, by the time we went back to get it, it was gone.  So, I'm sure Nate loved hearing that I found something on the side of the road....and that we had to go get it, right now.  Well, as soon as he got home.  To say that convincing Nate was the toughest part of getting it home, would be incorrect.  Actually getting it home, was a bear.  We had the kids in the car, it was hot, we had to go back to get the drill set to take the whole thing apart, and it took three trips.  You get the point.  But it was finally here.  Then, there it sat--in our garage for awhile. 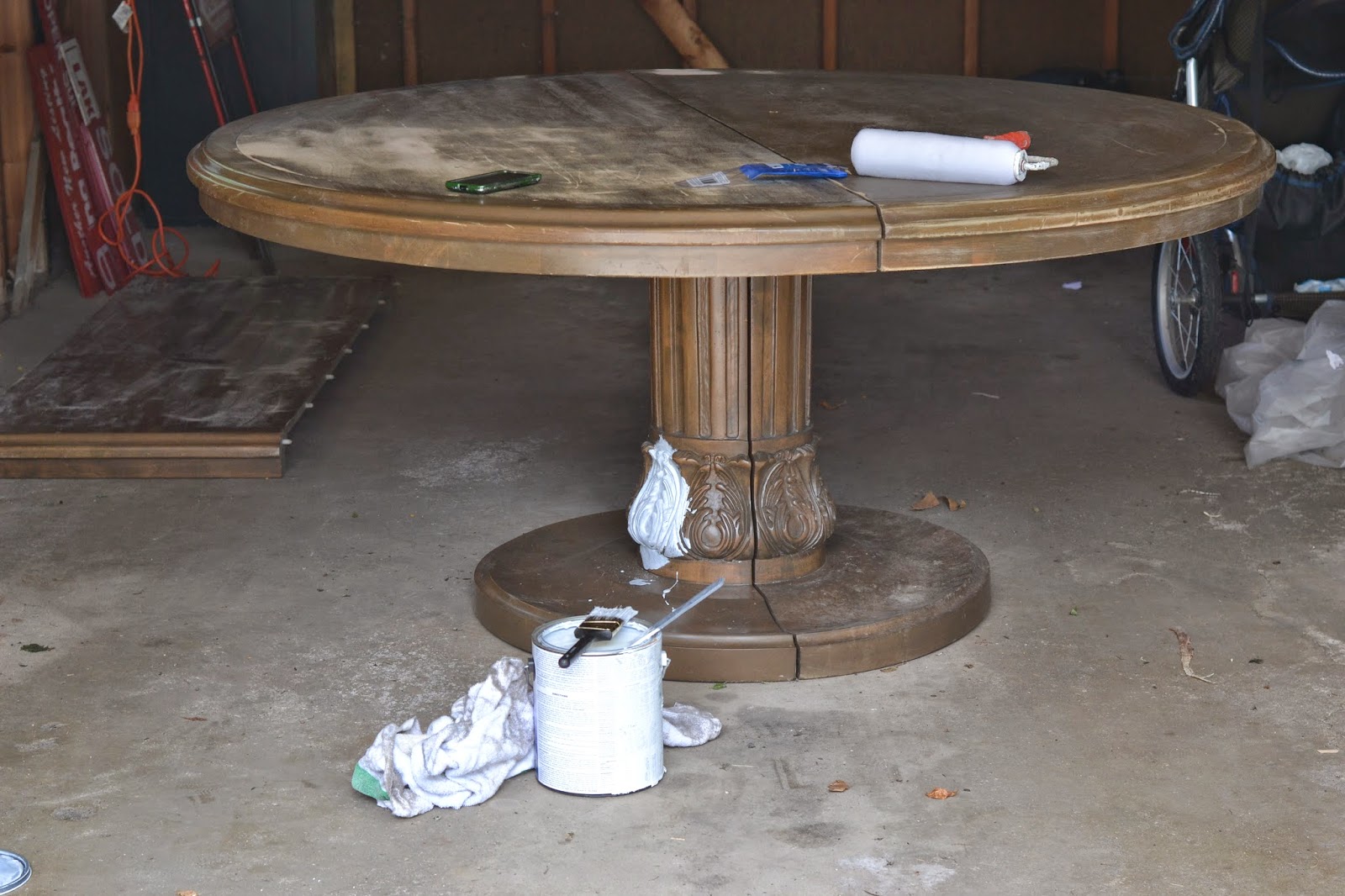 My initial desire was to stain the top and paint the pedestal.  But, when I finally got my dad and sander over to look at it, the top had a layer of that compressed ugly plastic wood that would have taken years to sand off.  We did about a square foot and had already blasted through a bunch of sandpaper...so we decided to jump ship on staining the top. 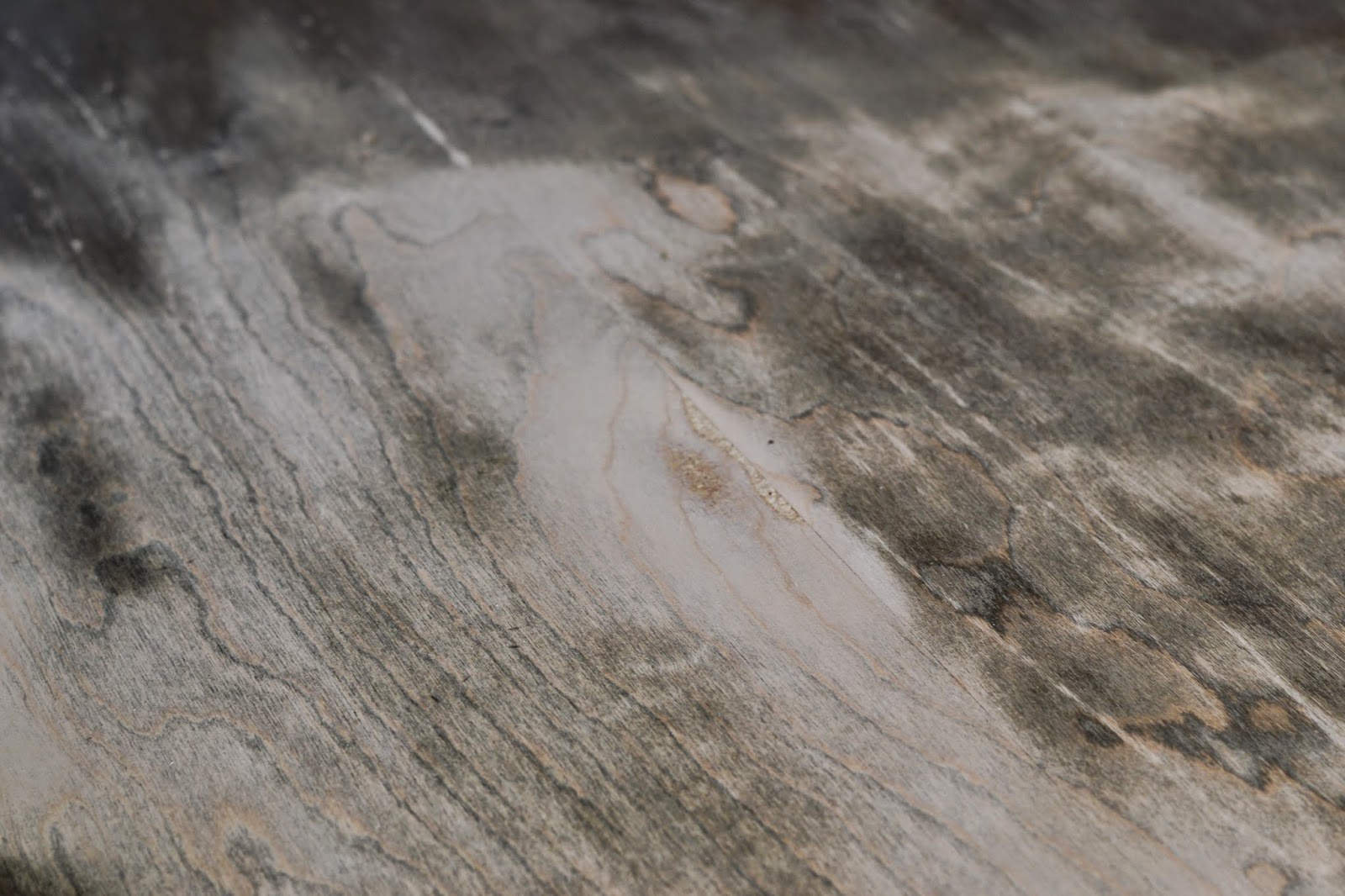 I guess I had to mull it over for a year or so, because we finally dragged her back out this summer to get to painting.  First a coat of primer.... 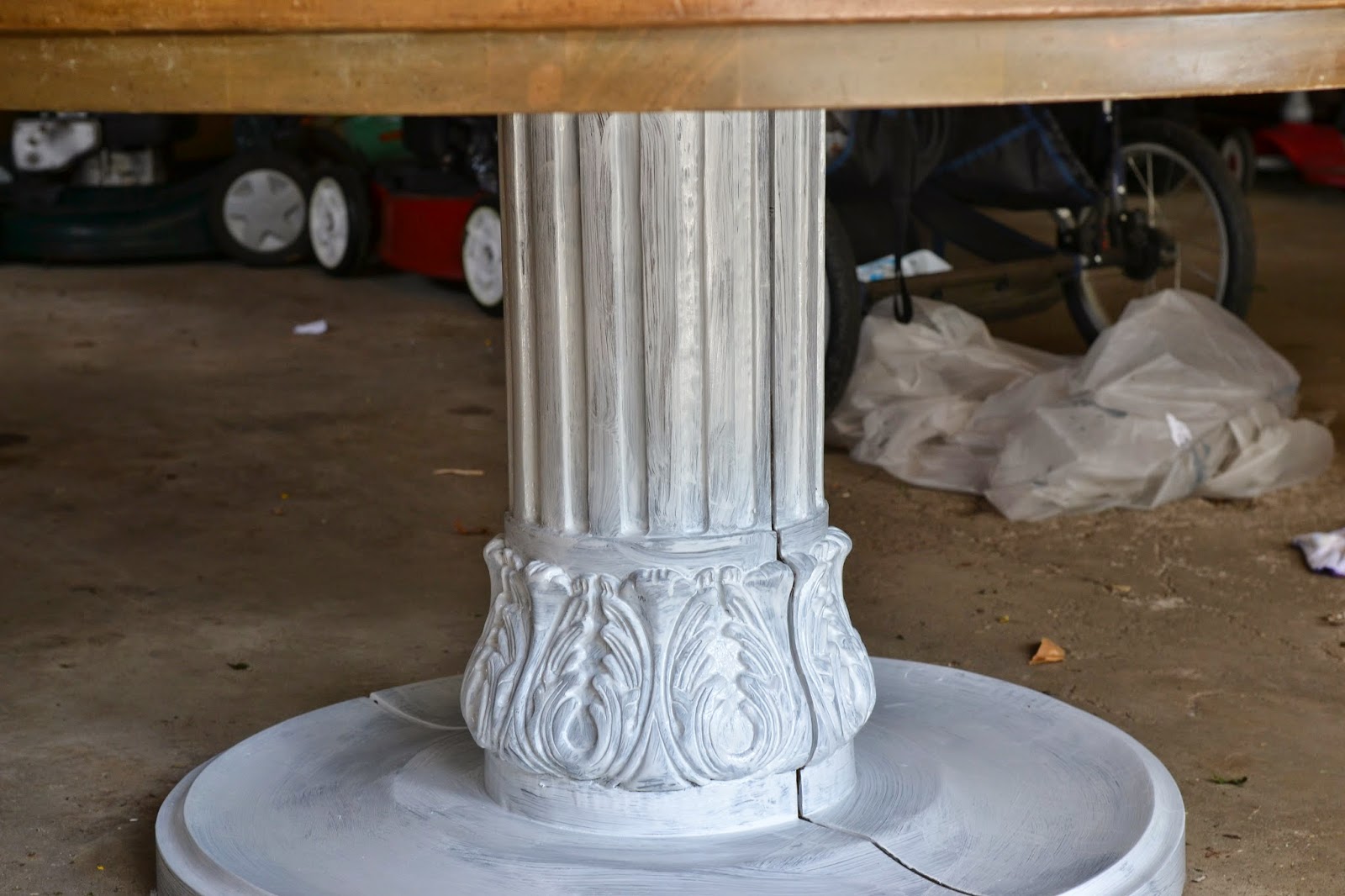 And some help from my now no-napping Griffin. 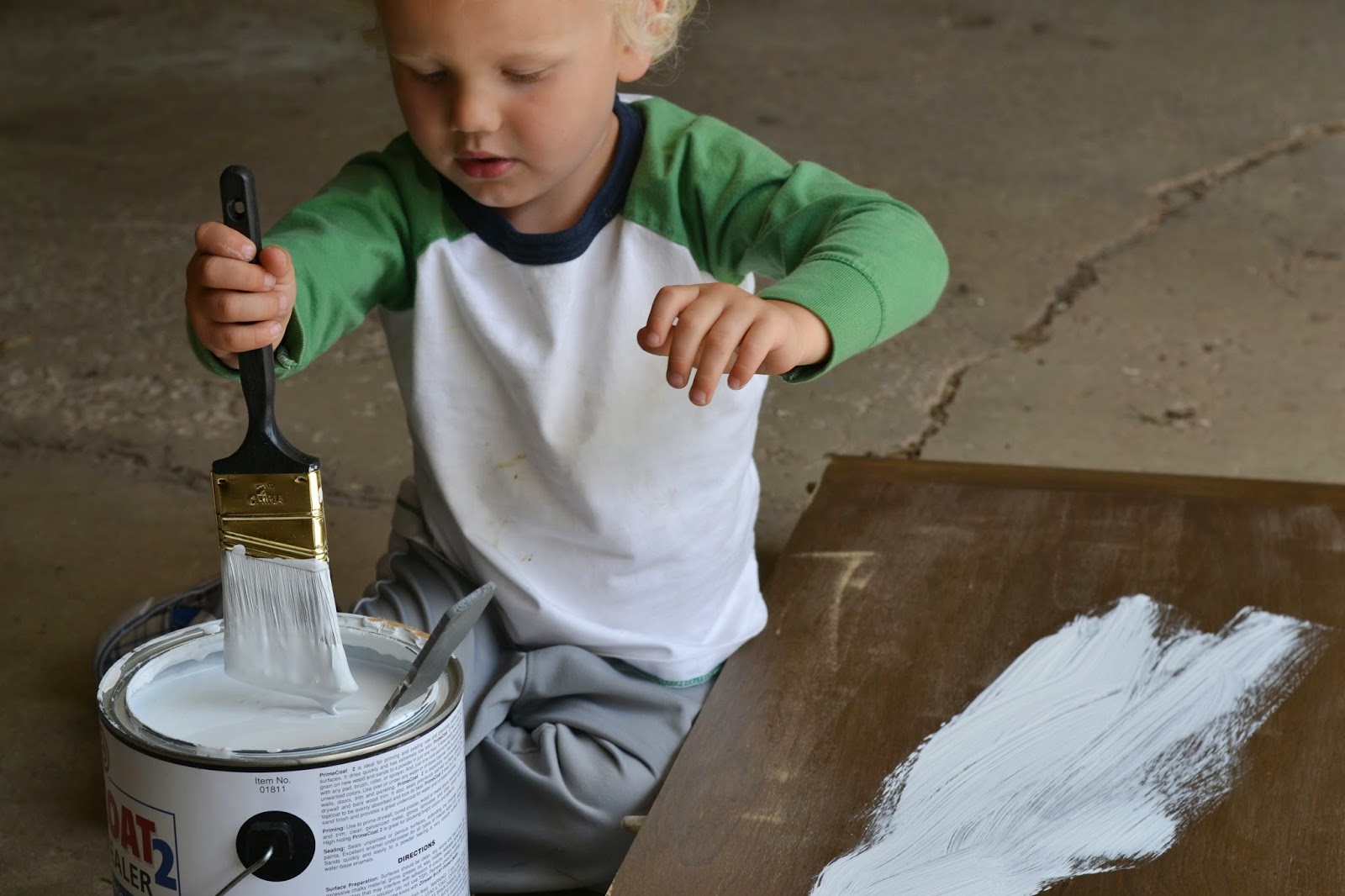 He really does want to help, it just seems that everything I want to do during naps (or what used to be naps) doesn't require help...or accepting help makes the project take twice as long. 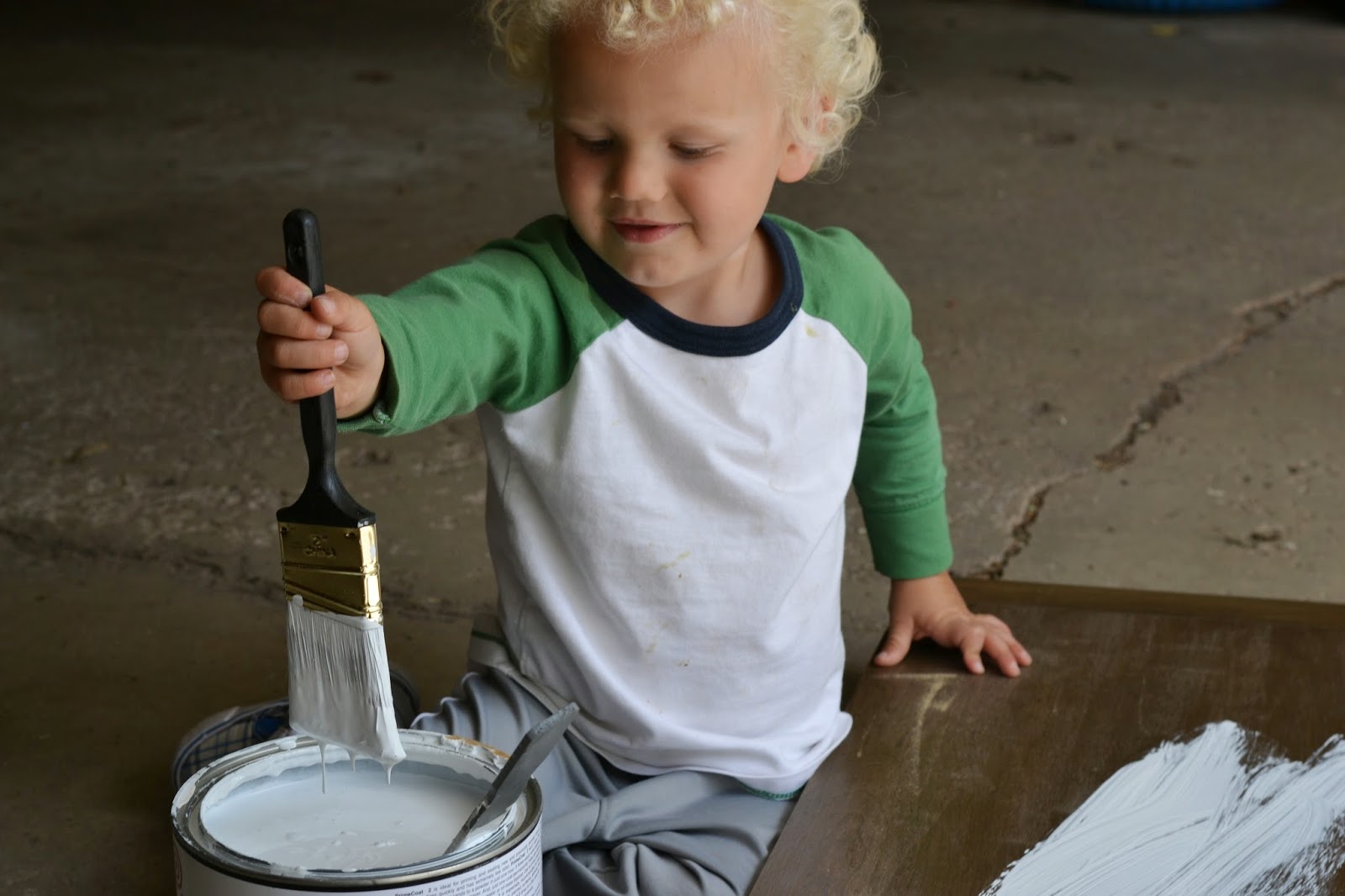 On the bright side, I love getting time one on one with my little man and I love teaching him little skills like painting, sanding, fixing, so he will one day have the confidence to be his own handy man. 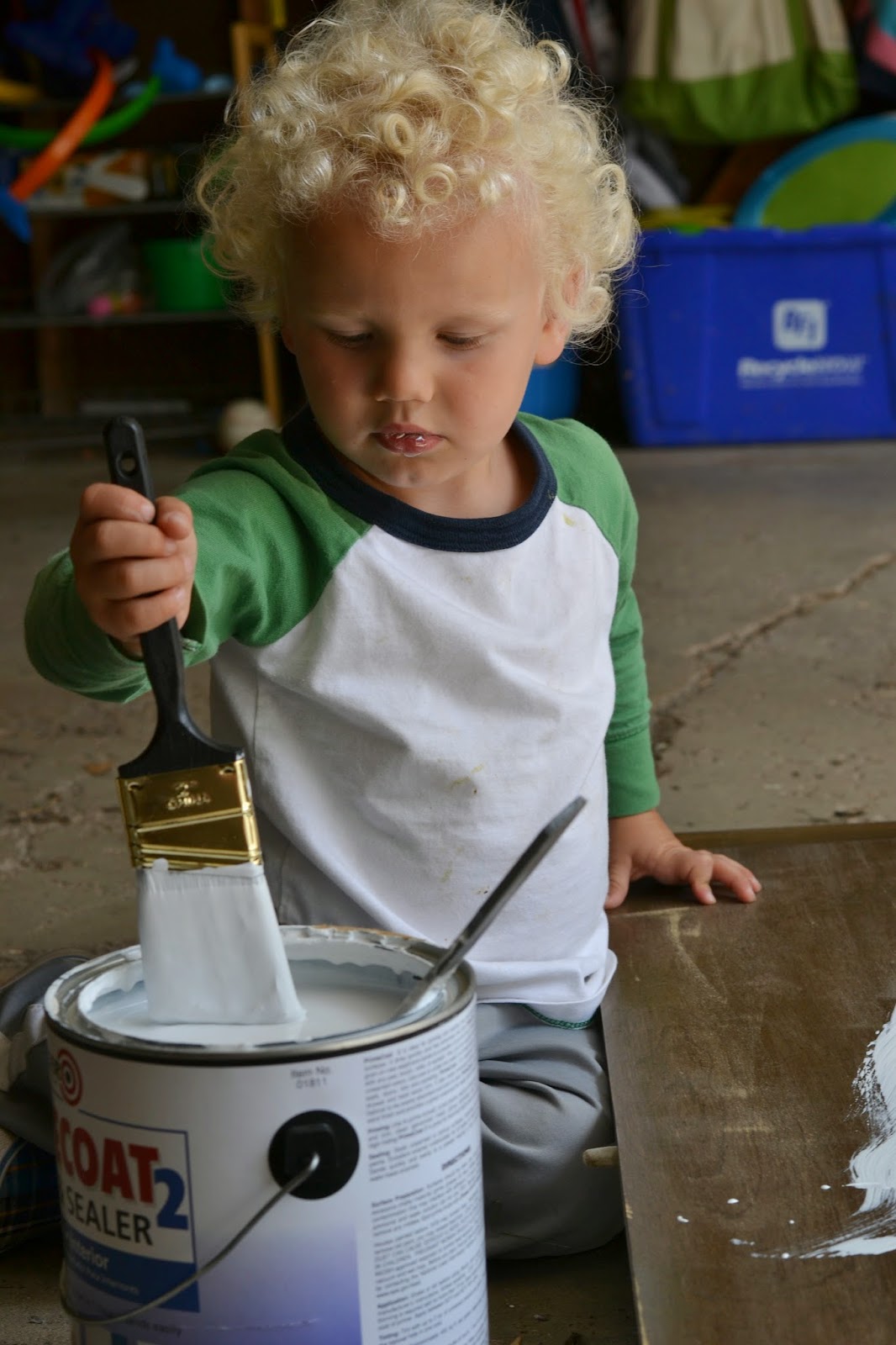 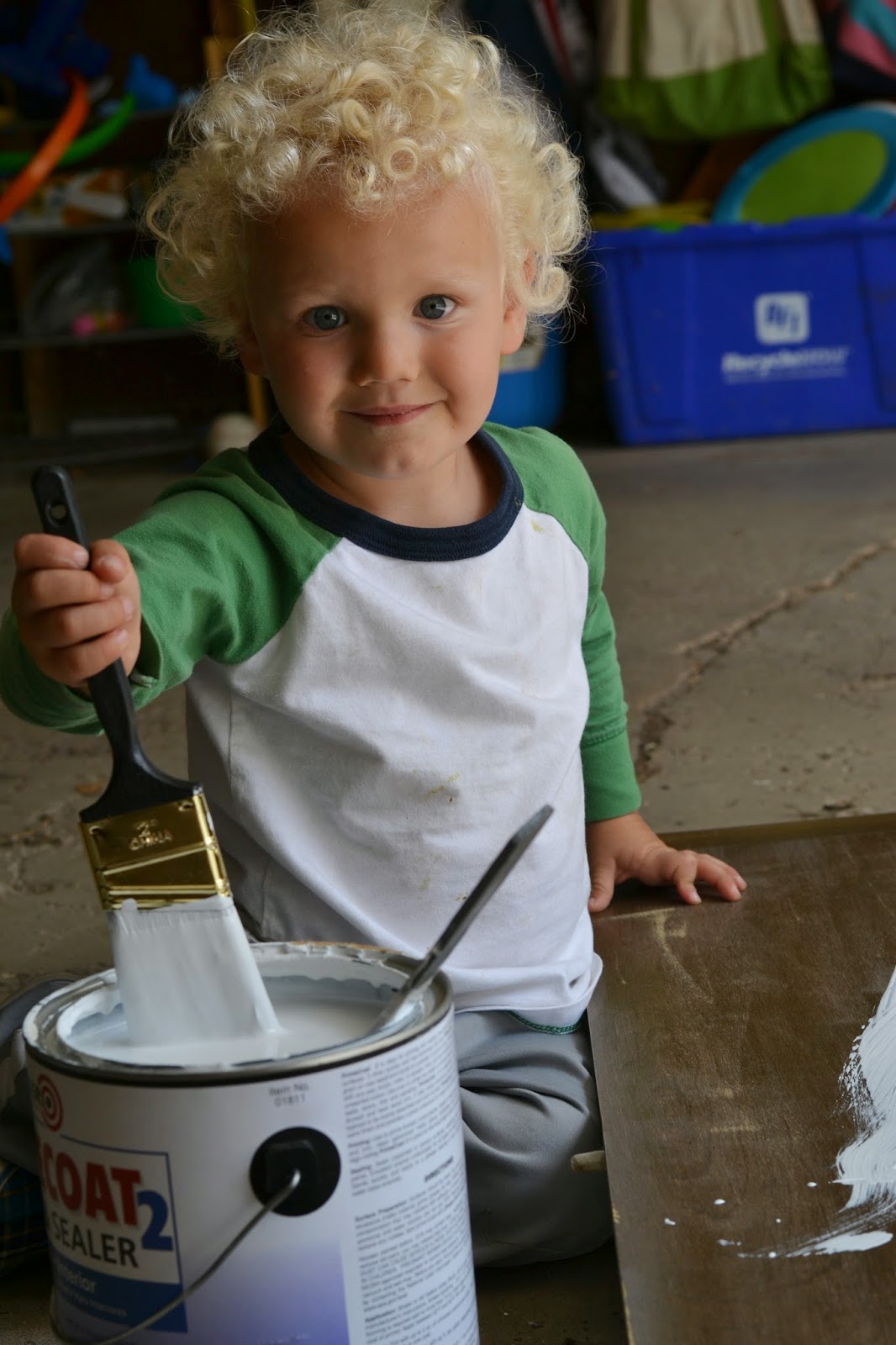 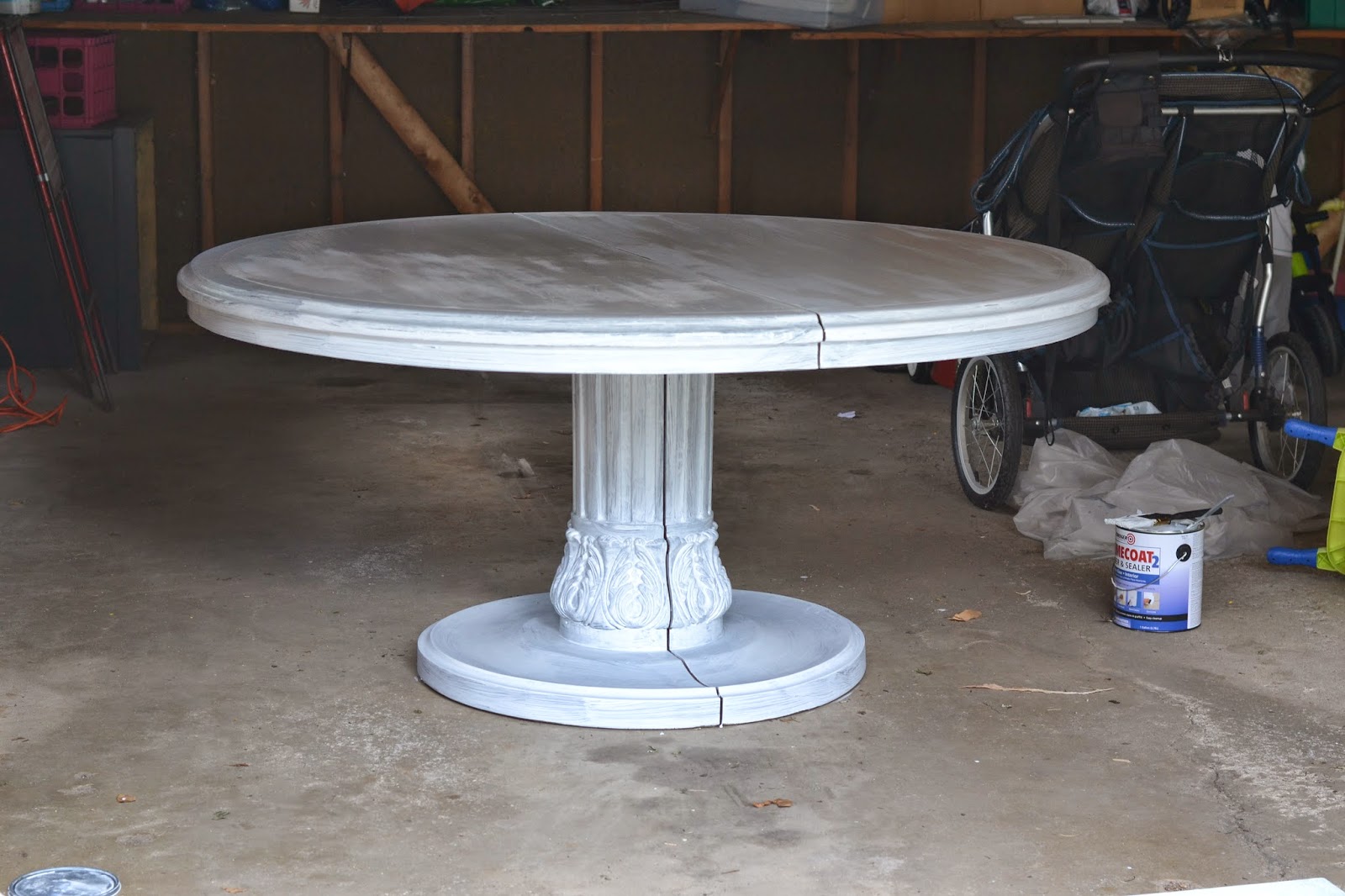 Oh, and I forgot to mention...there is a leaf!  So not only is the table a bit bigger than our current table, it has the capacity to be giant size! 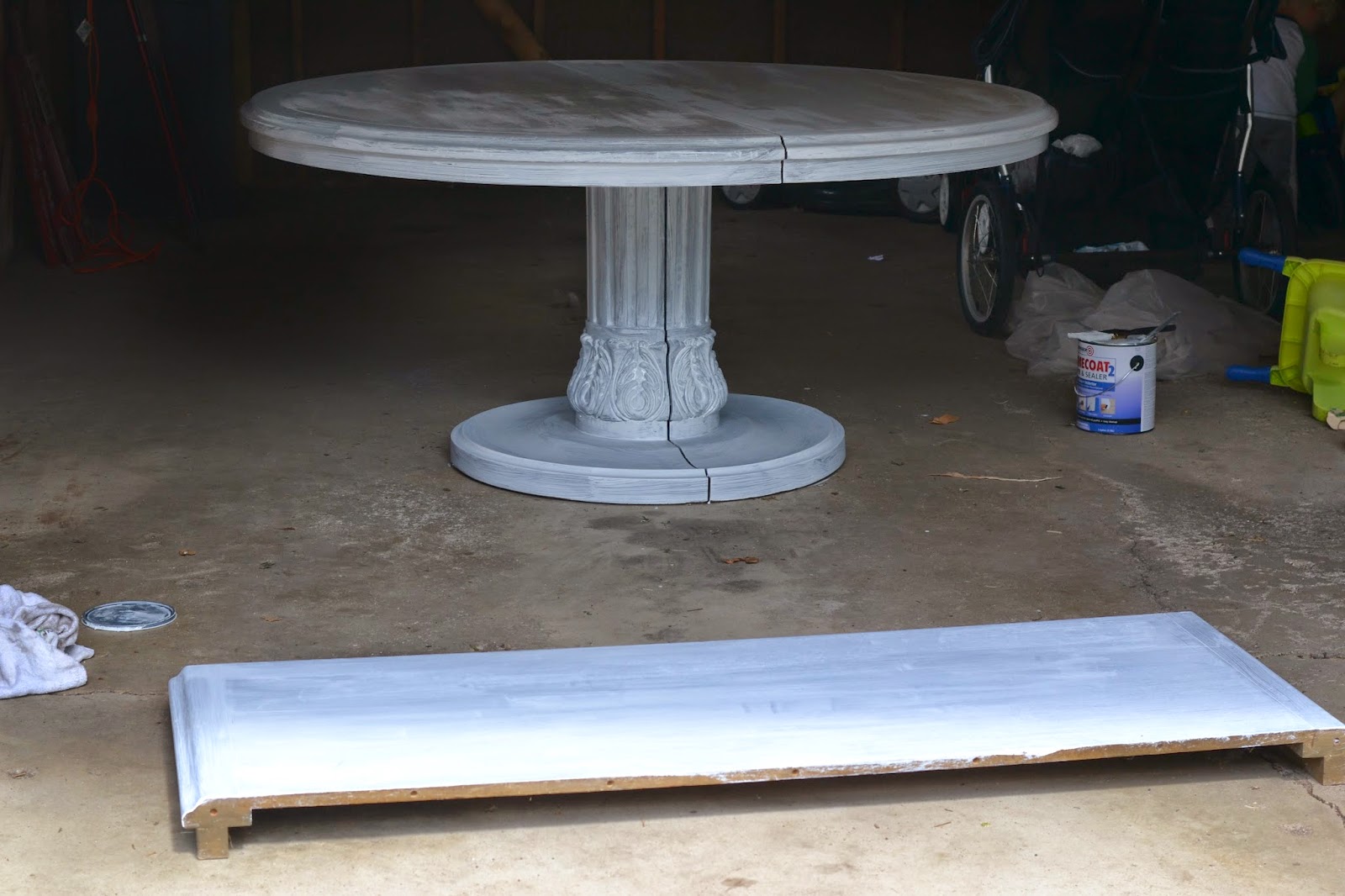 And then I lost him to his golf game. 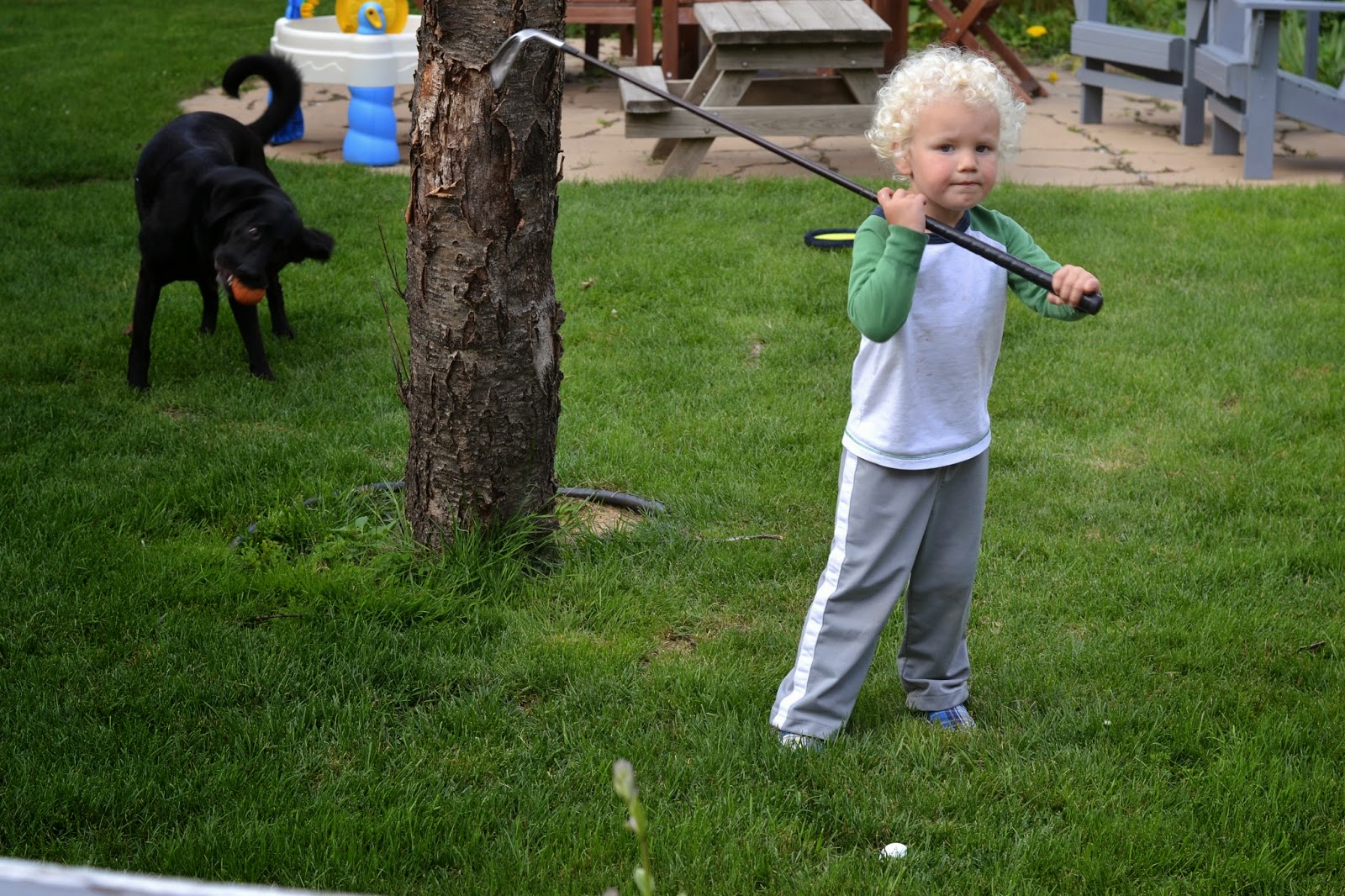 Notice that he's wearing pants and long sleeves in the middle of summer?  I was secretly hoping he would get paint all over his pants so he "couldn't wear them anymore."  He's so particular about his clothes right now and it makes mornings difficult. 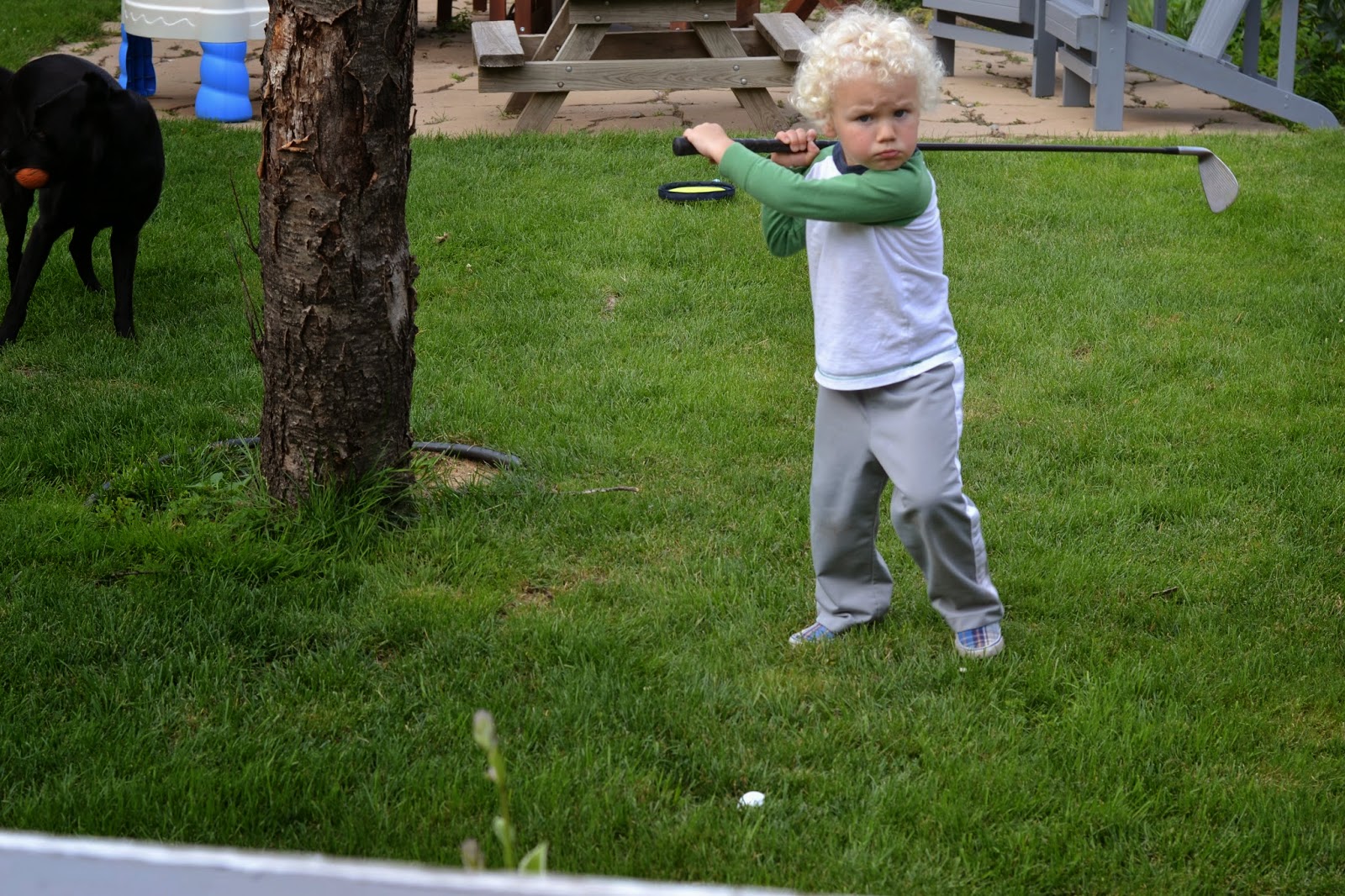 But golf would keep him occupied enough for me to get the pedestal painted white. 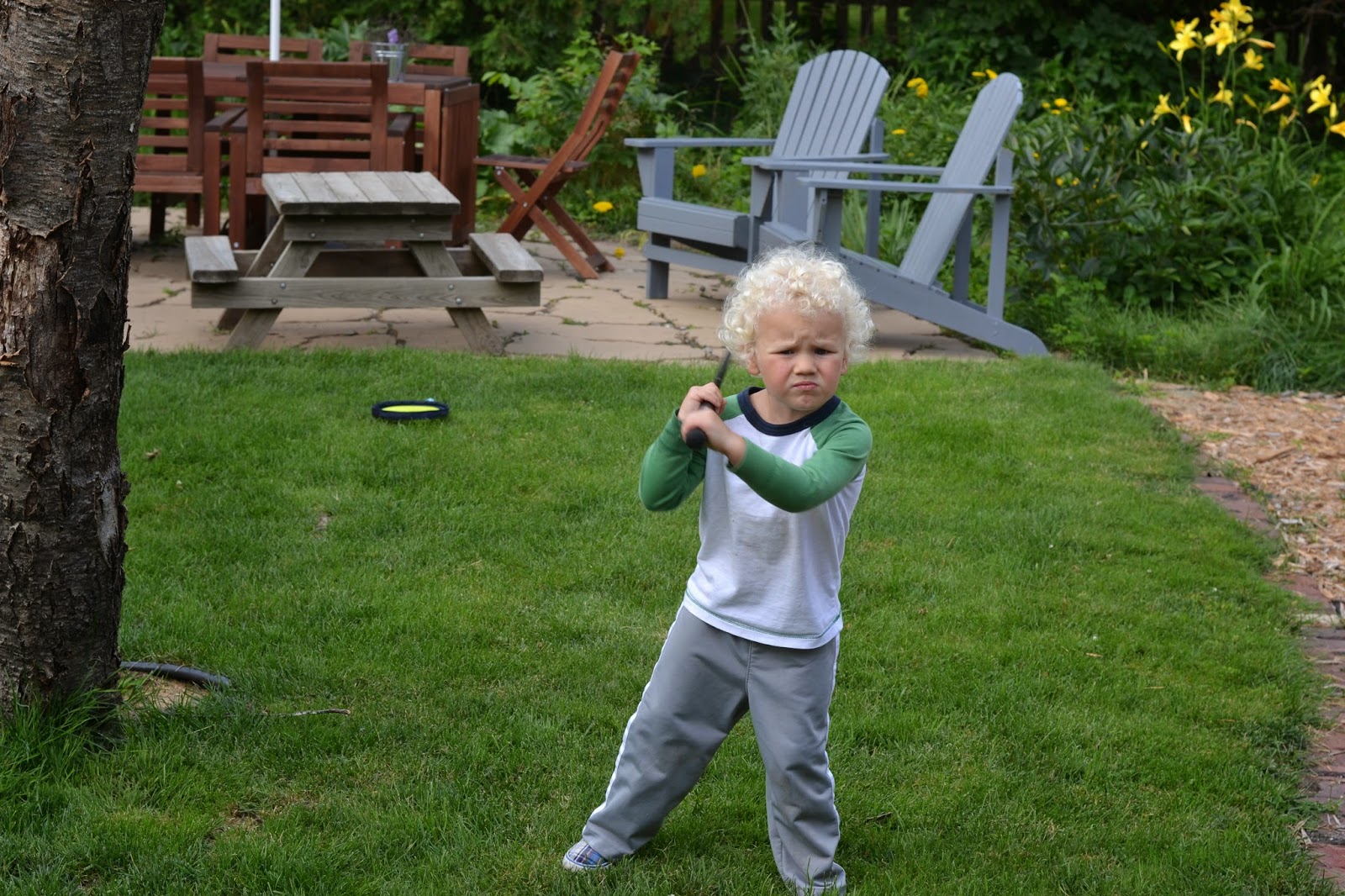 I painted just the pedestal white and left the top just primed, in hopes that I would find a gray-ish (surprise, surprise) paint for the top. 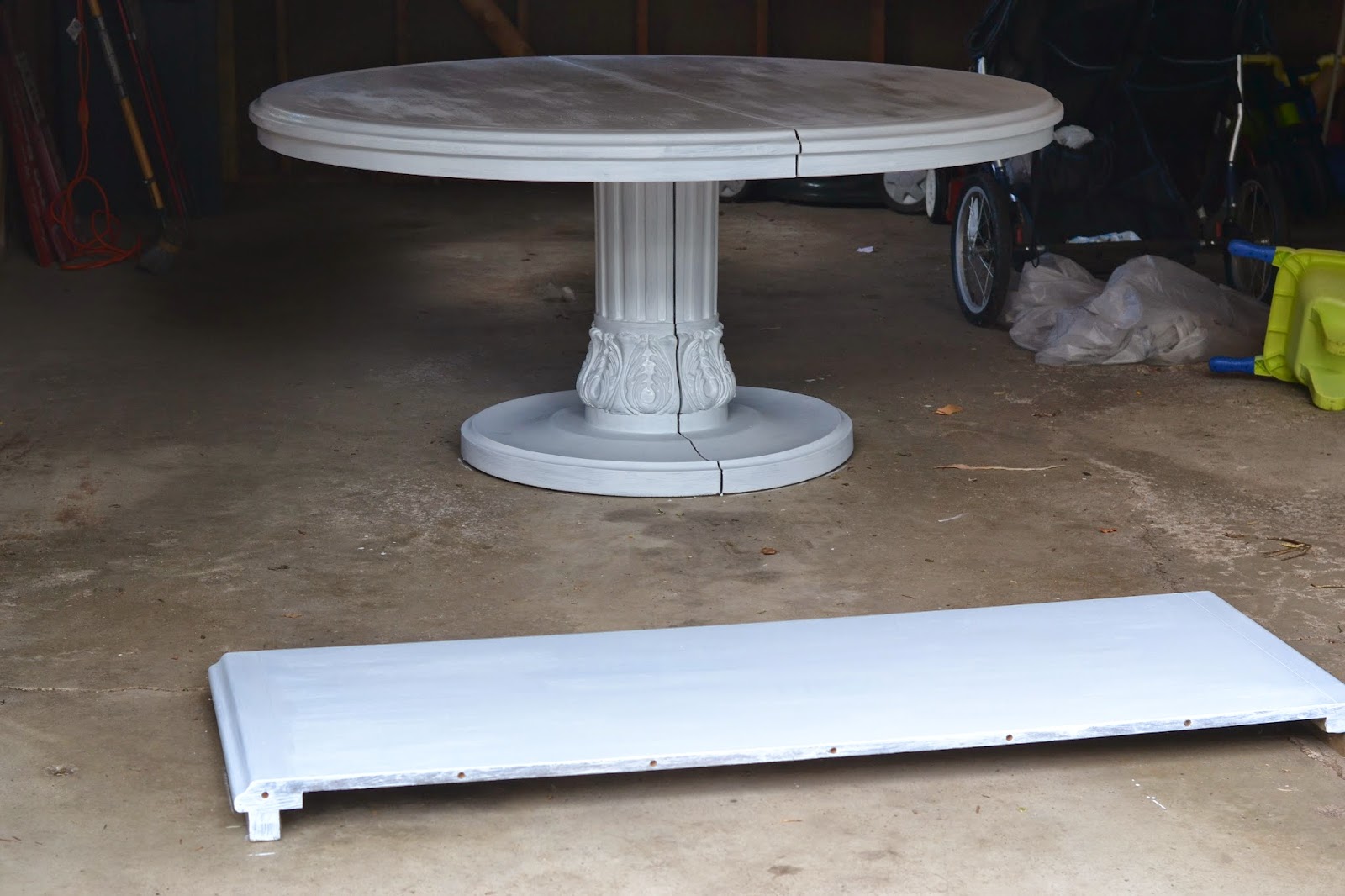 I ended up painting the top in Annie Sloan Chalk Paint's "French Linen."  I love it.  It's beautiful and it was fun using prepared chalk paint for the first time (now I'd like to make my own!). 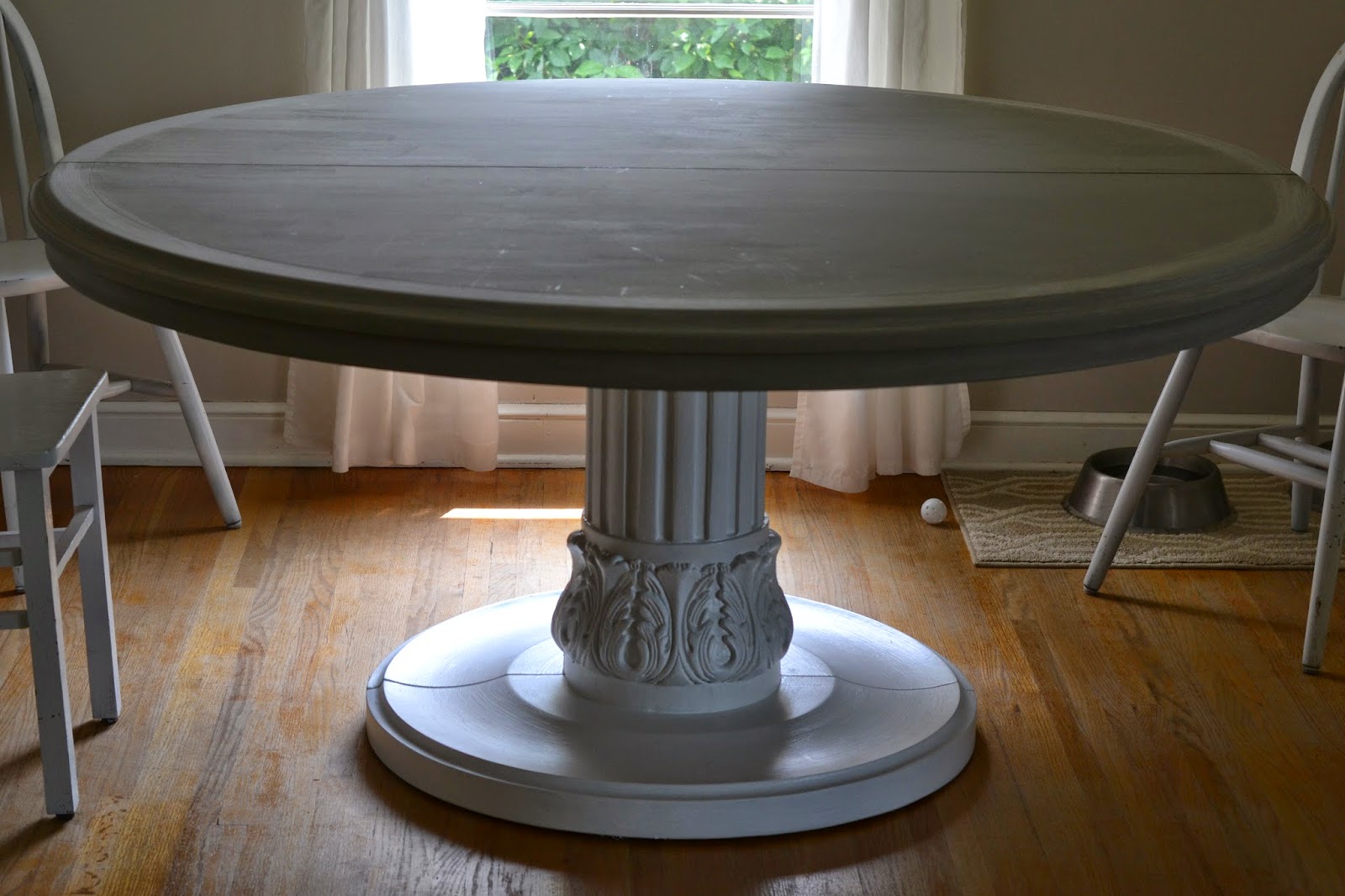 After two coats of chalk paint, I scuffed it up a little with sandpaper. 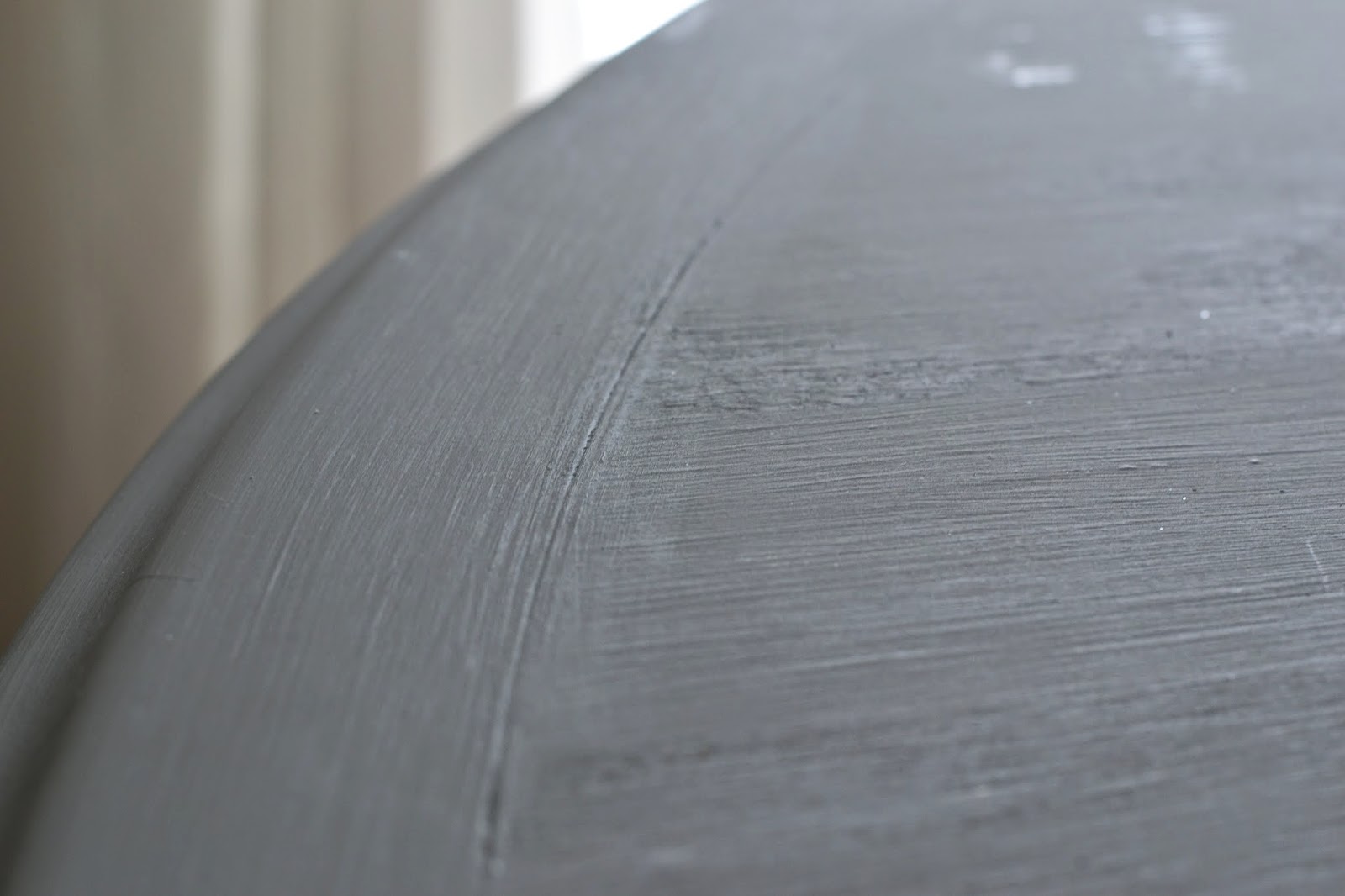 I wanted it to look finished, but not perfect.  There will be many a kiddos eating, homeworking, crafting, etc. on this table over the next few years and it definitely needs to be able to withstand heavy traffic. 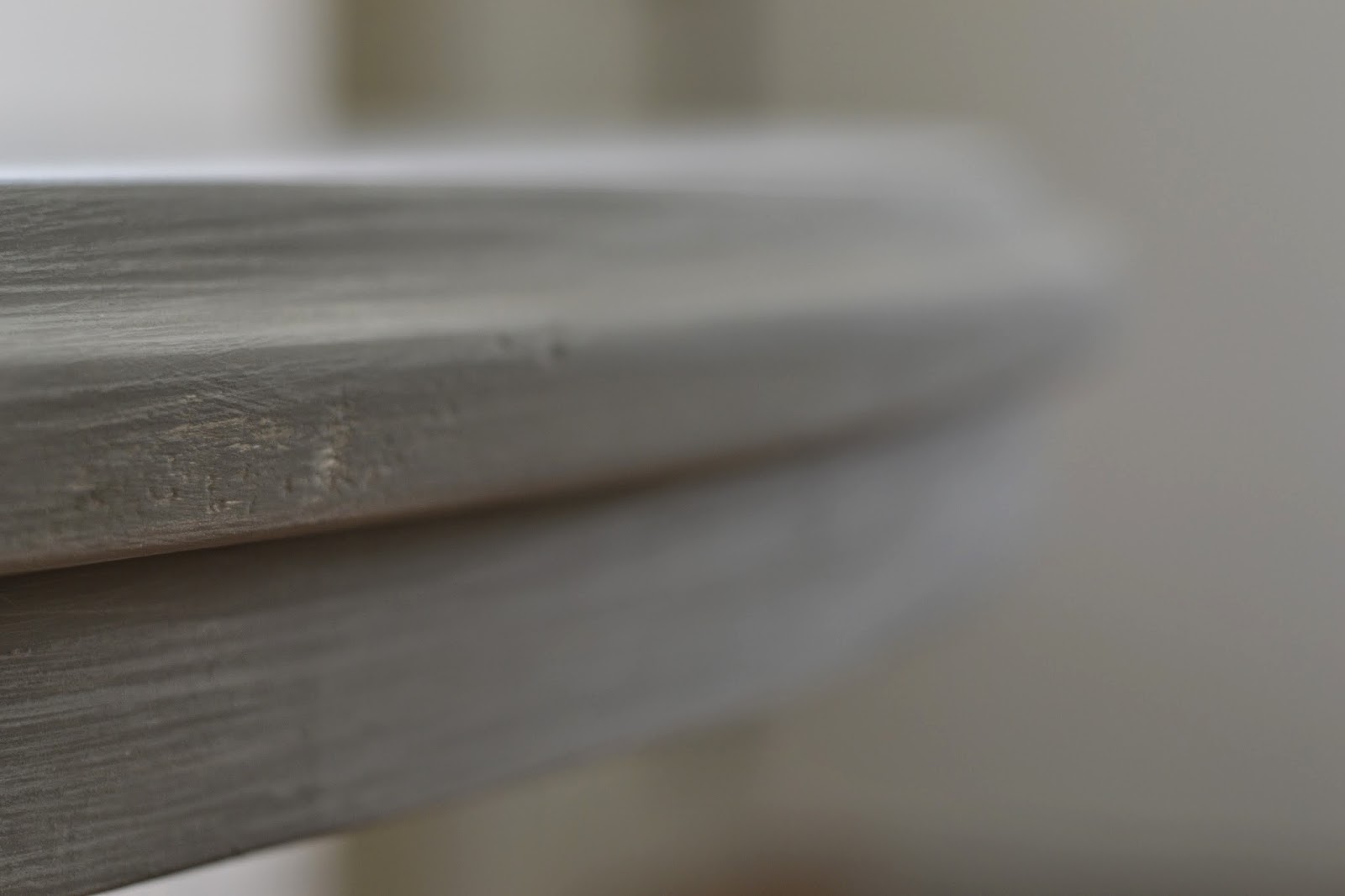 I researched on what to use as a topcoat and ended up with Polycrylic.  It seemed to be the best choice for something that could get wet and banged on. 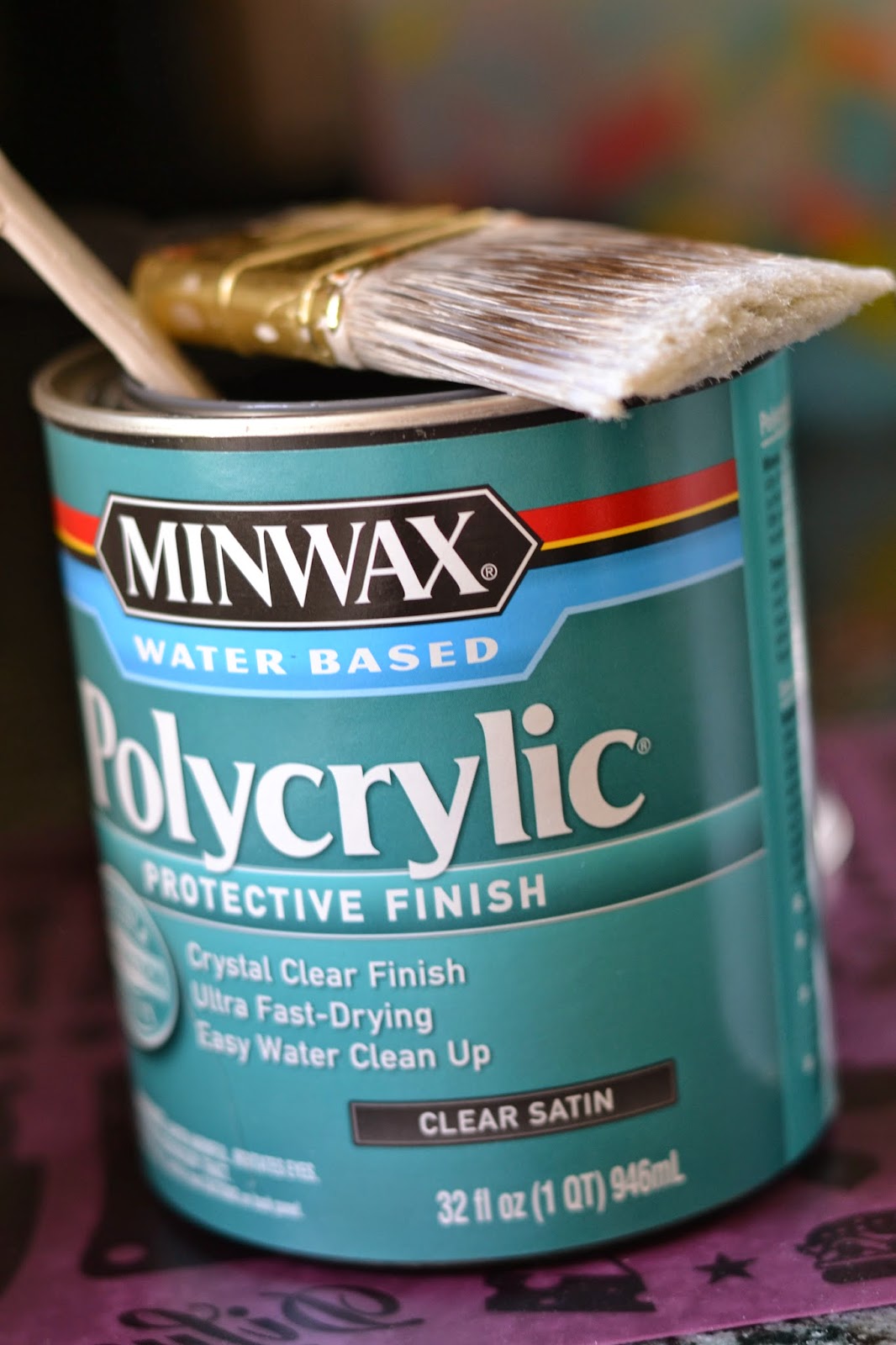 It's weird though, when a water glass leaves a water ring, it's temporary.  At first I though it was ruined only hours into being finished, but over time, the water rings disappear....like a mood table. 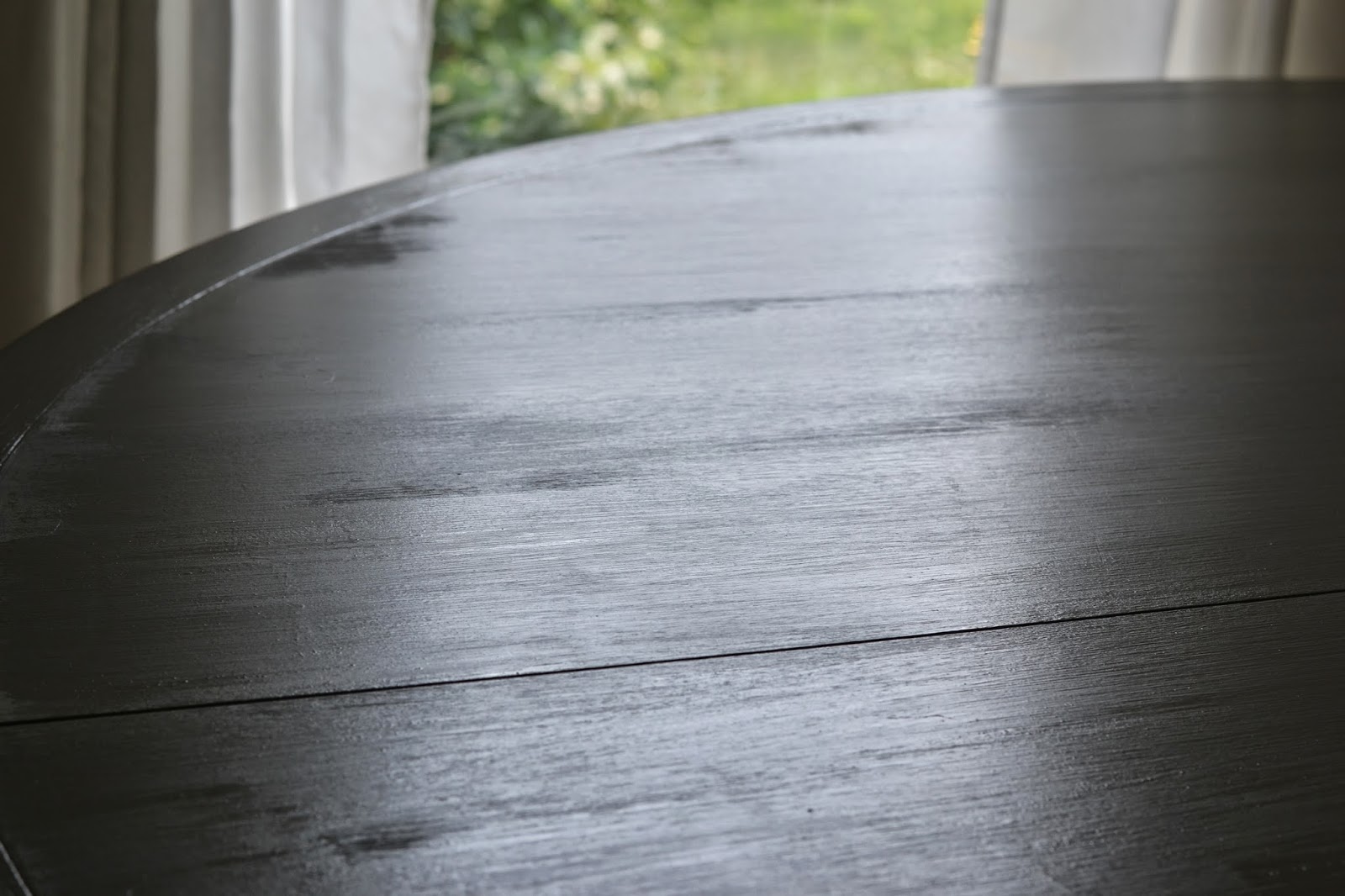 It's hard to see the contrast between the table top and the pedestal, but it is definitely gray and white.  We pulled our porch chairs in just to test out the size, etc.  Nate still thinks it's a bit big for the space, but I think it's growing on him.  He loves the table. 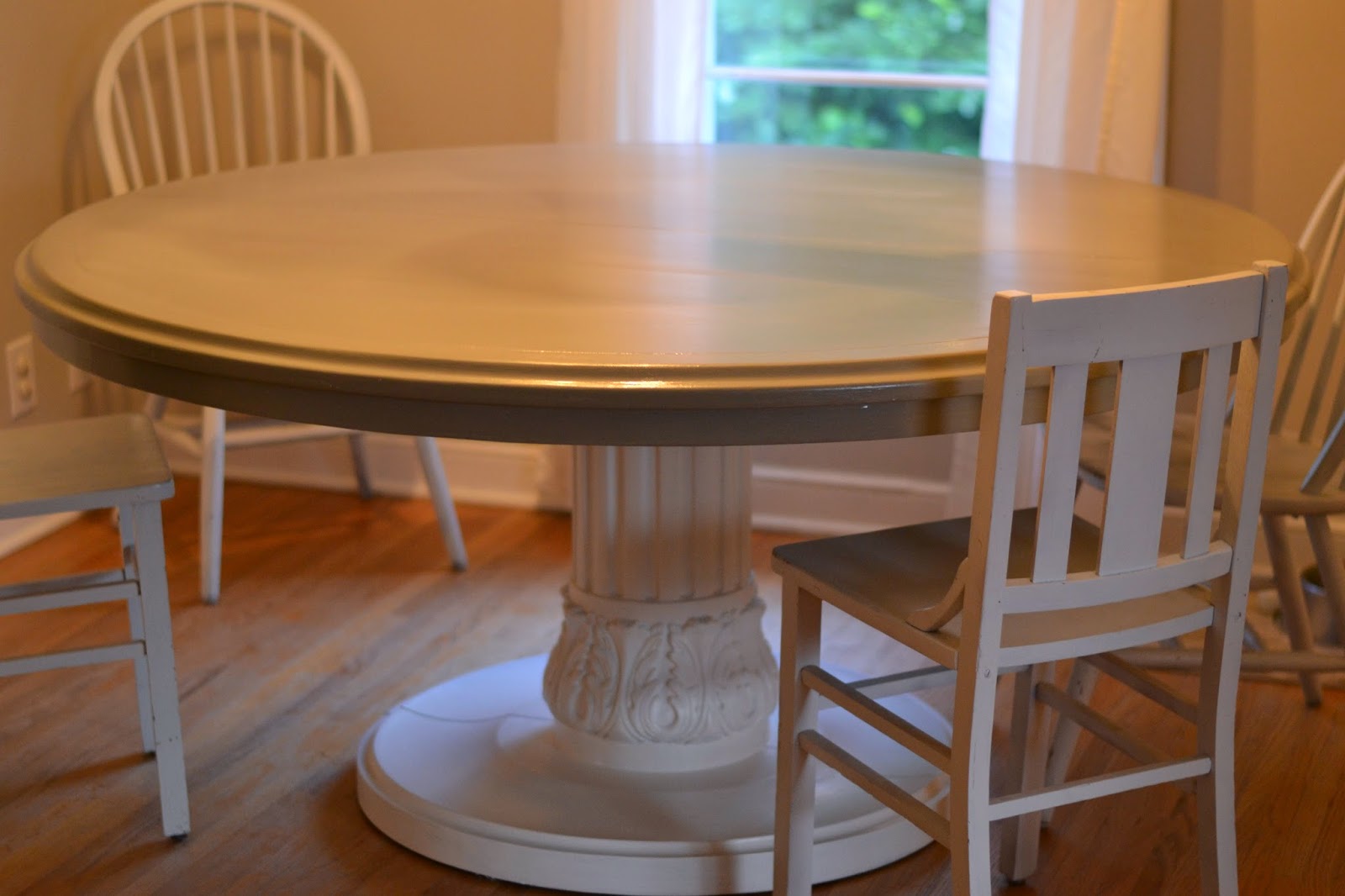 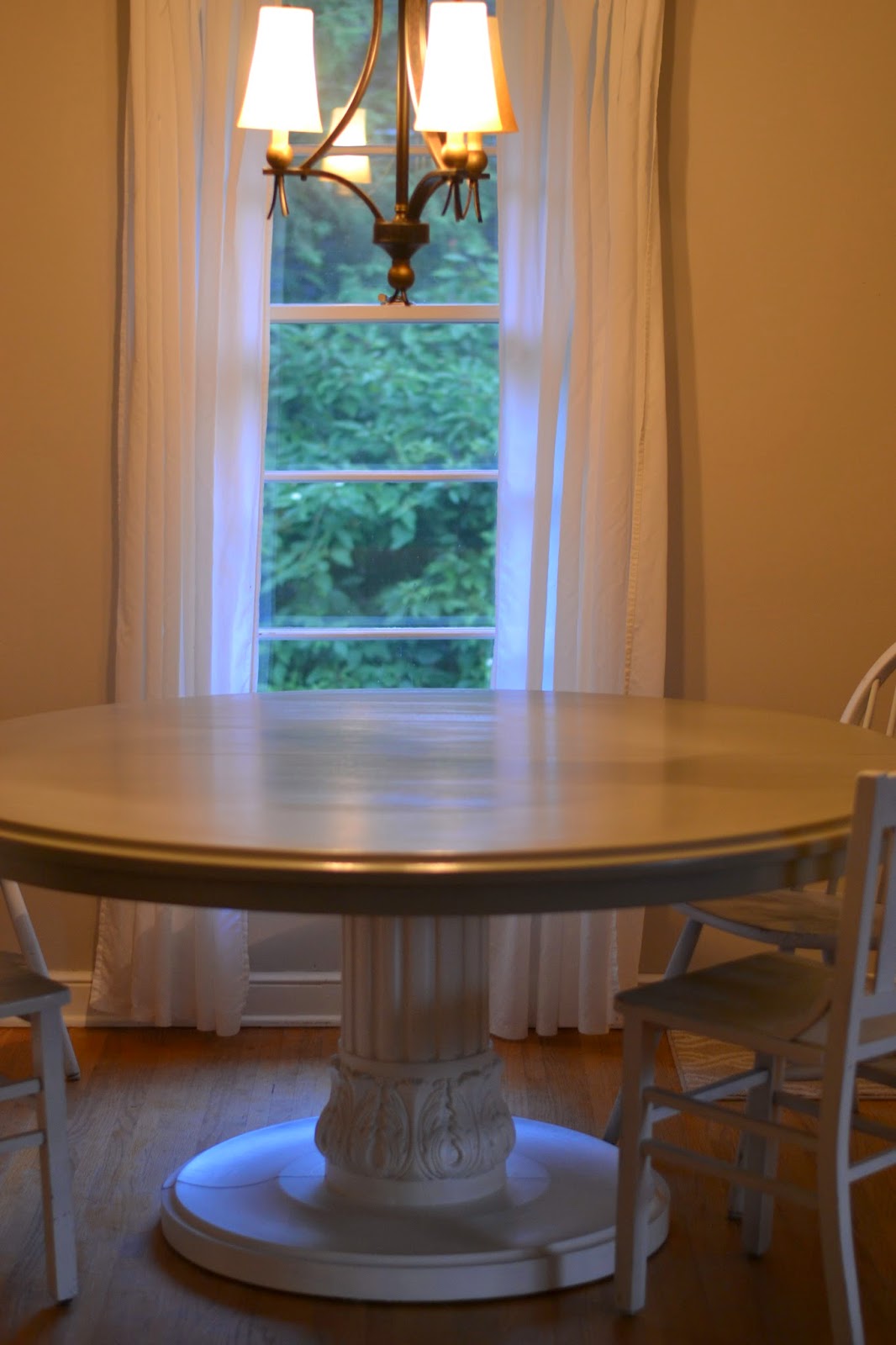 Once we decided we were keeping it (back up plan was to craigslist it if it just didn't seem to fit in our space), it was time to find chairs.  I'm selling the old table to make money to buy new chairs, so we're hoping to at least break even on our new table if not make money (minus labor-which is pretty expensive when you're paying an 8 month pregnant lady:). 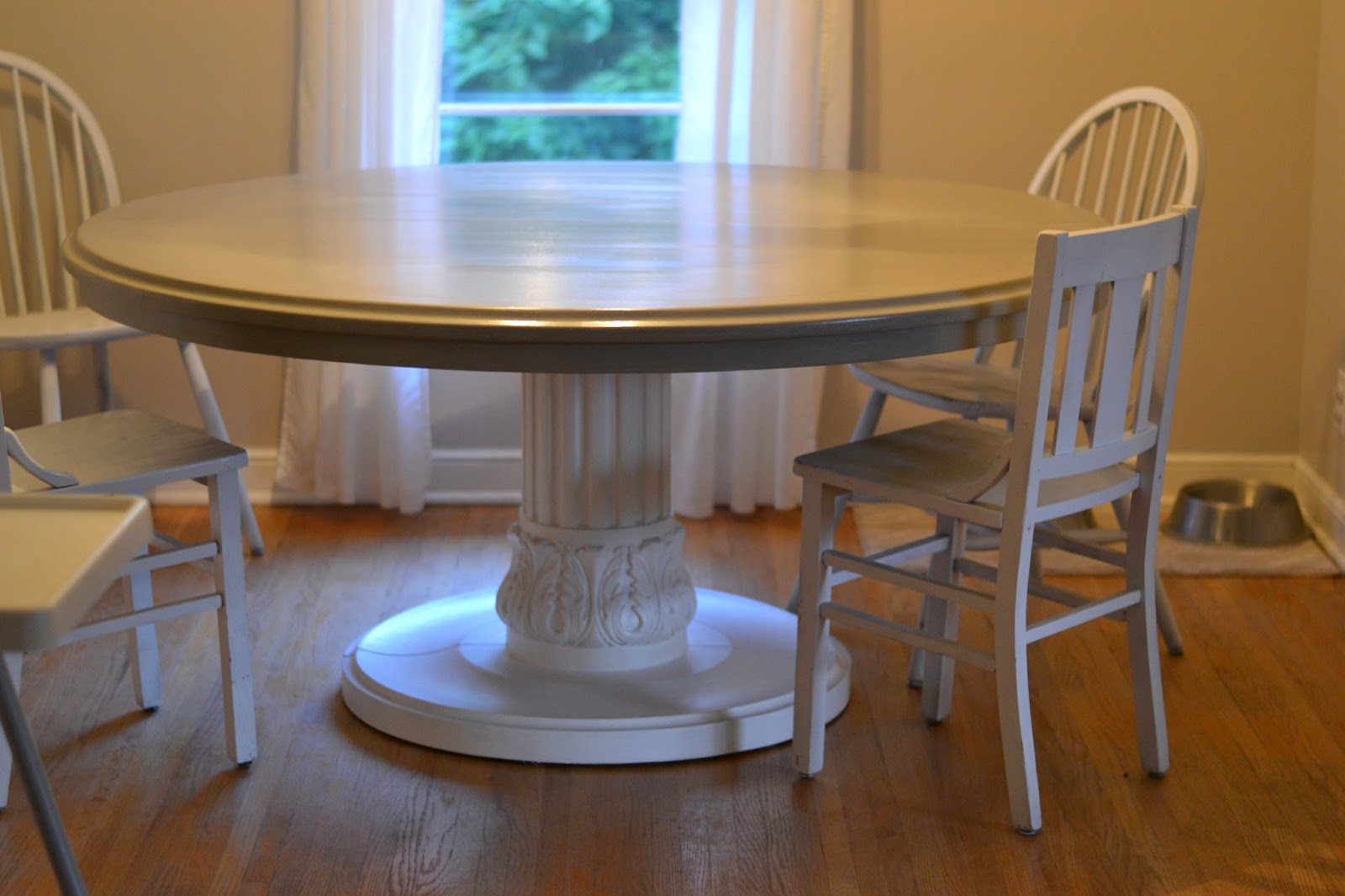 And here she is...chairs and all! 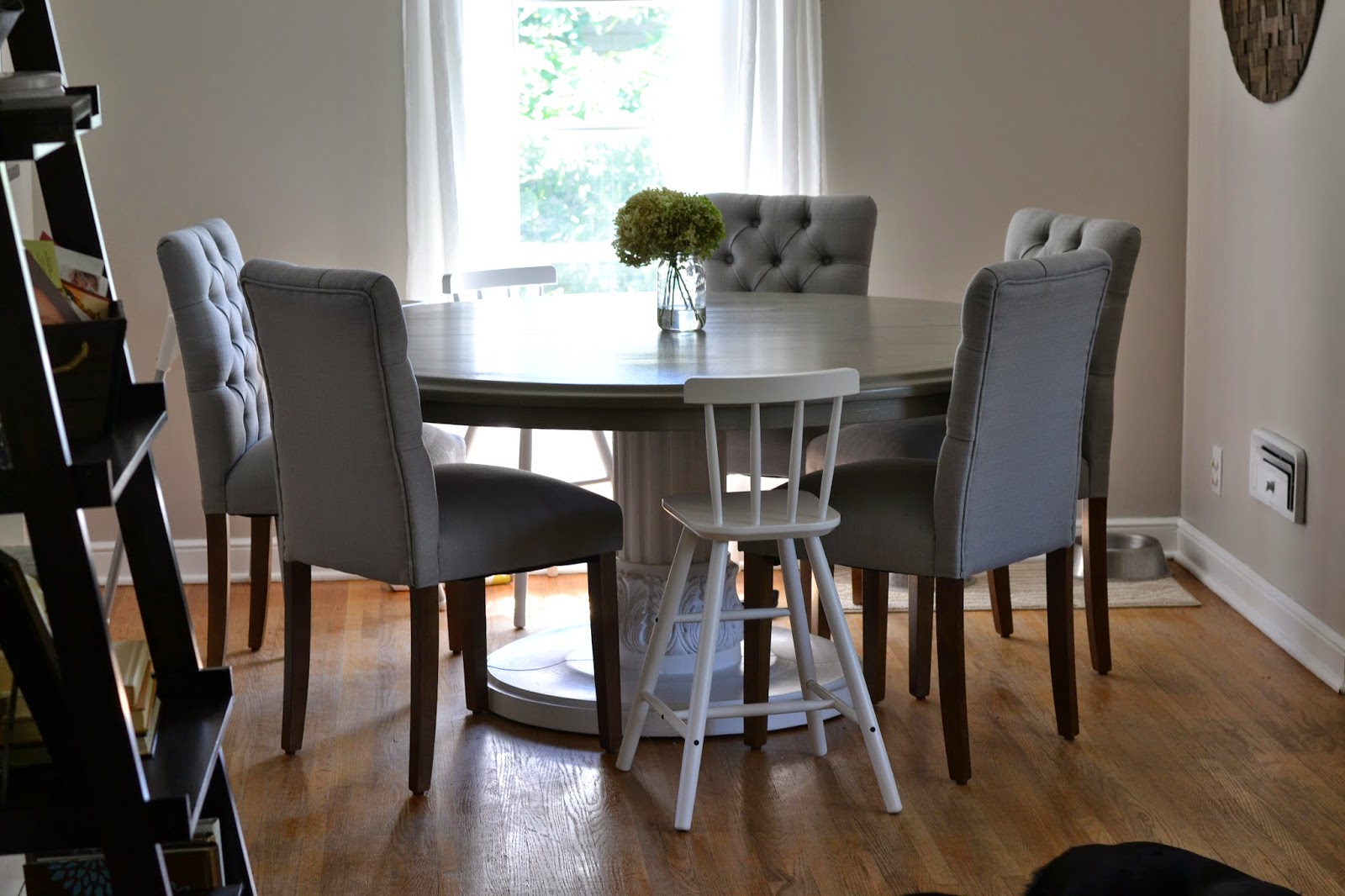 We settled on gray upholstered tufted chairs (I'm kind of obsessed with tufts right now) and got new kids chairs so they don't have to spill all over the upholstery. 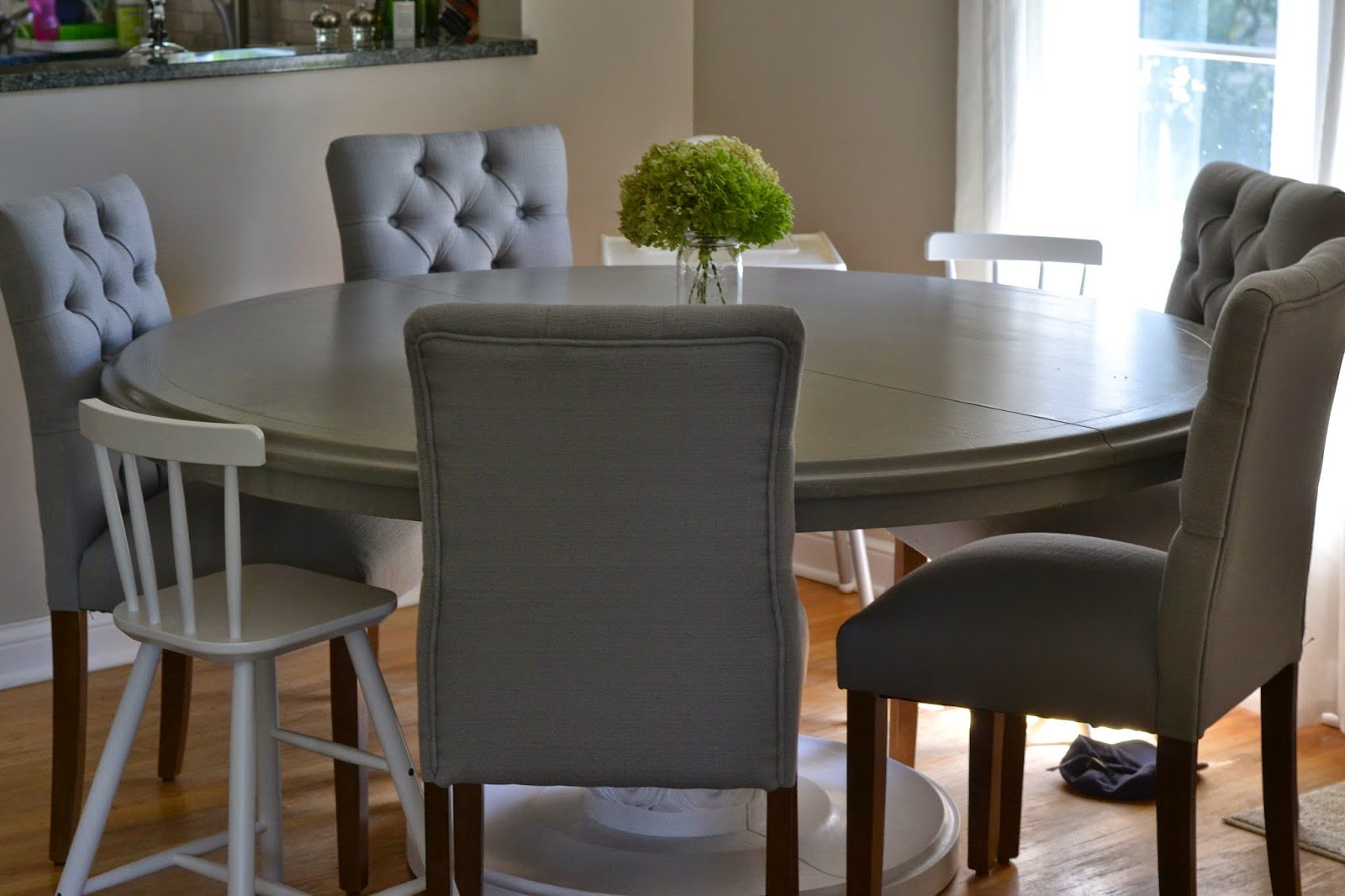 I just love how it has brightened up our dining room (painting the walls helped a little too), and even though it's a bit bigger, the chairs push in all the way (rather than hitting the pedestal) and it doesn't seem too big. 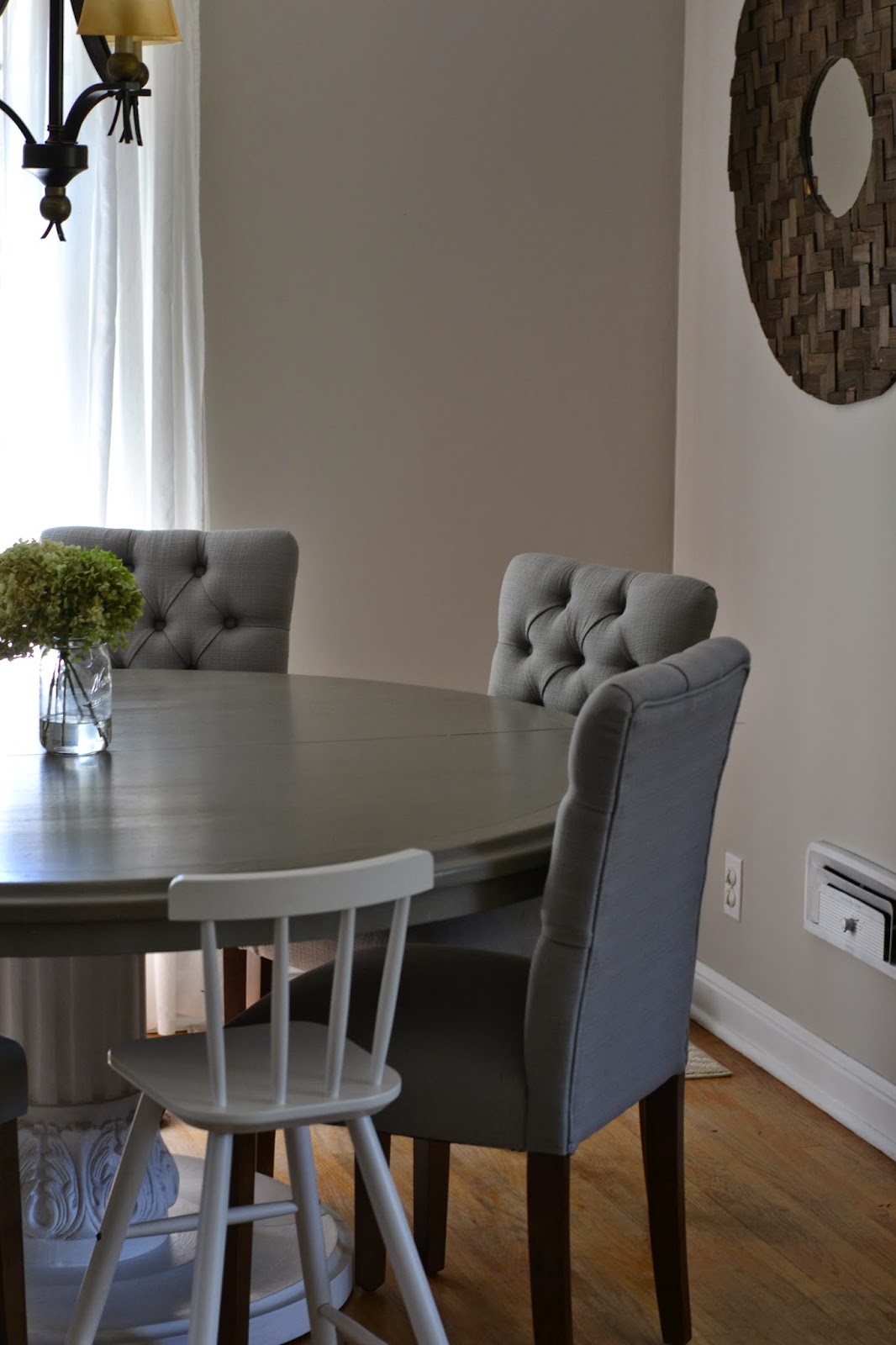