Build your own: Exposed Beam Shelves

I am often circulating ideas around my head about how I'd like to update a wall, a room or a corner of a room.  On my mind for awhile now was to try to disguise the television in our living room.  By the natural shape of our living room, we didn't have too many options when it came to setting it up and while I would love for the fireplace to be the focal, it's just too oblong a room to make that a reality.  The television is on the focal wall, but I wanted the surrounding to be interesting enough that there was something to look at besides the TV.
I had an idea in my head of making some kind of shelves that looked like exposed beams.  I couldn't quite find a picture to match exactly what I had in my head, but here are some that are close. 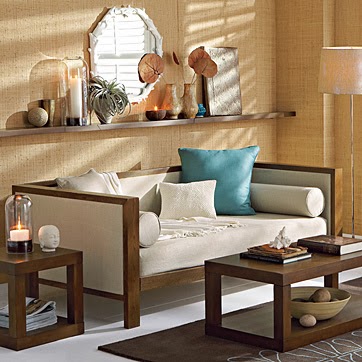 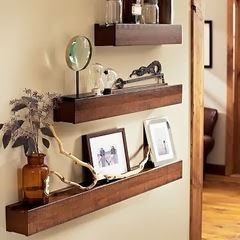 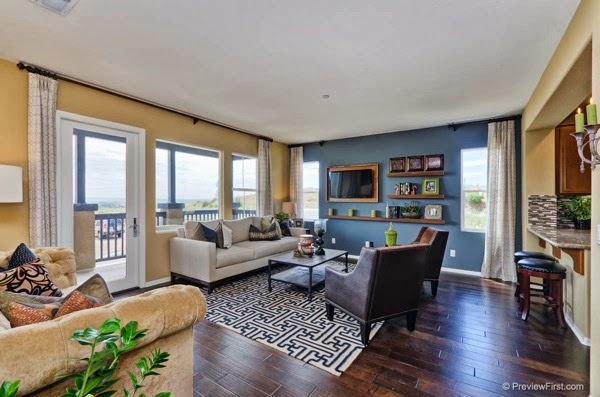 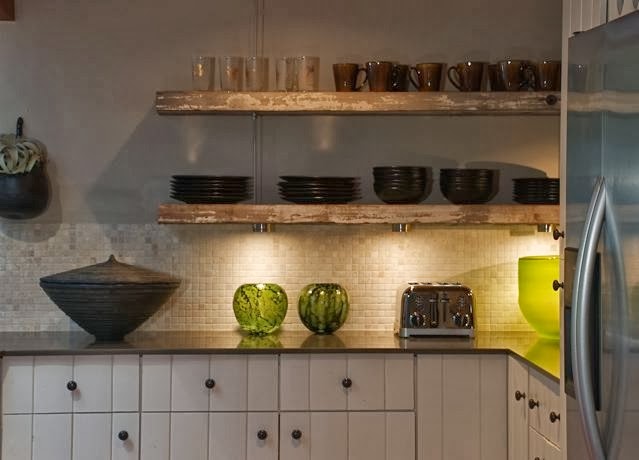 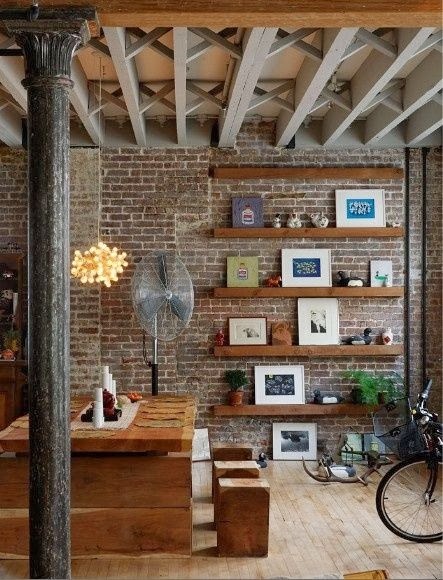 ﻿
So, I consulted my handy dandy Handyman Dad, and here's what I ended up with after a trip to Home Depot.  6 1X4s, 2  2X4s (all cut to same length) to make two log beam shelves. 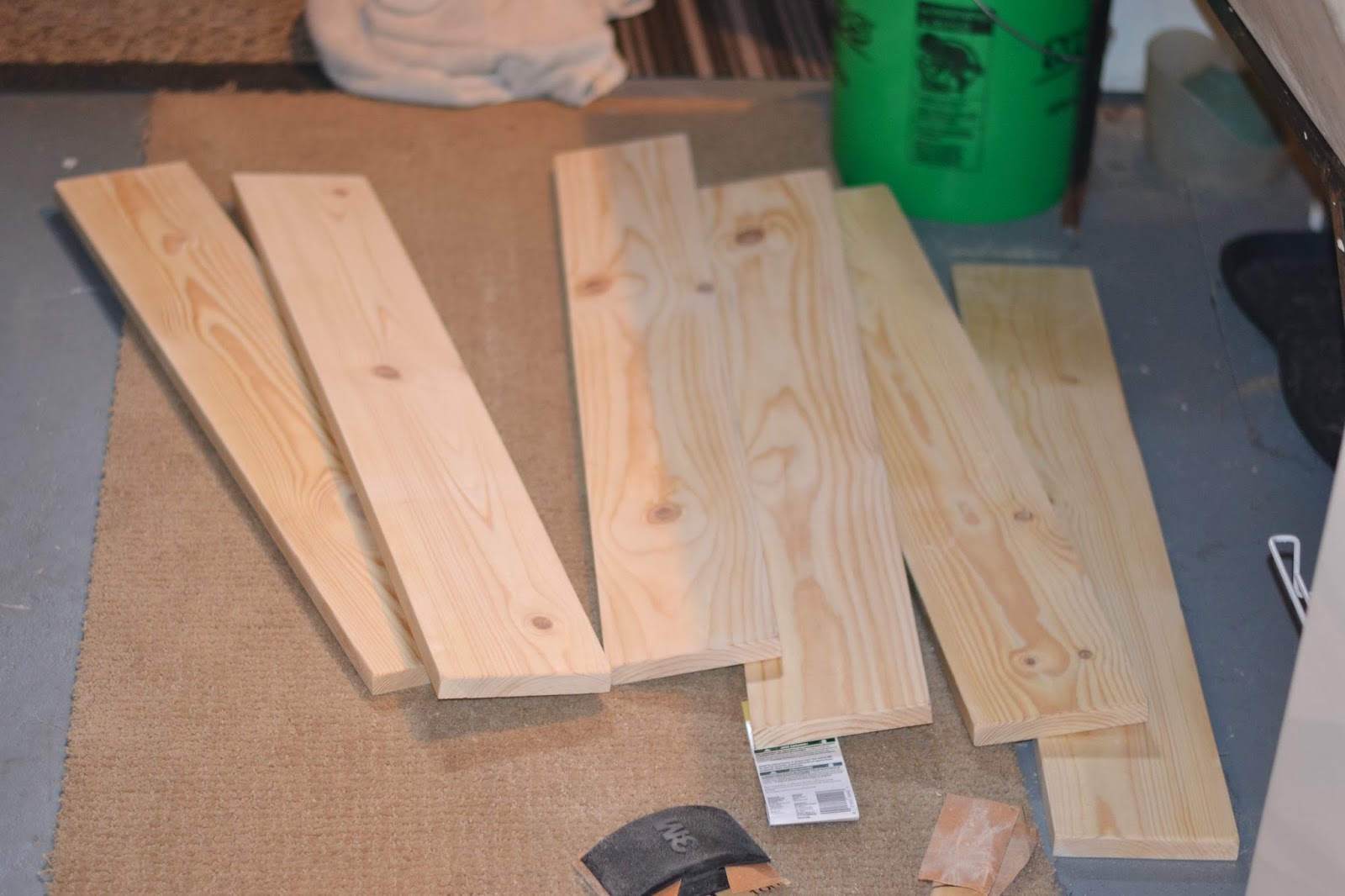 First step was to sand and stain the wood. 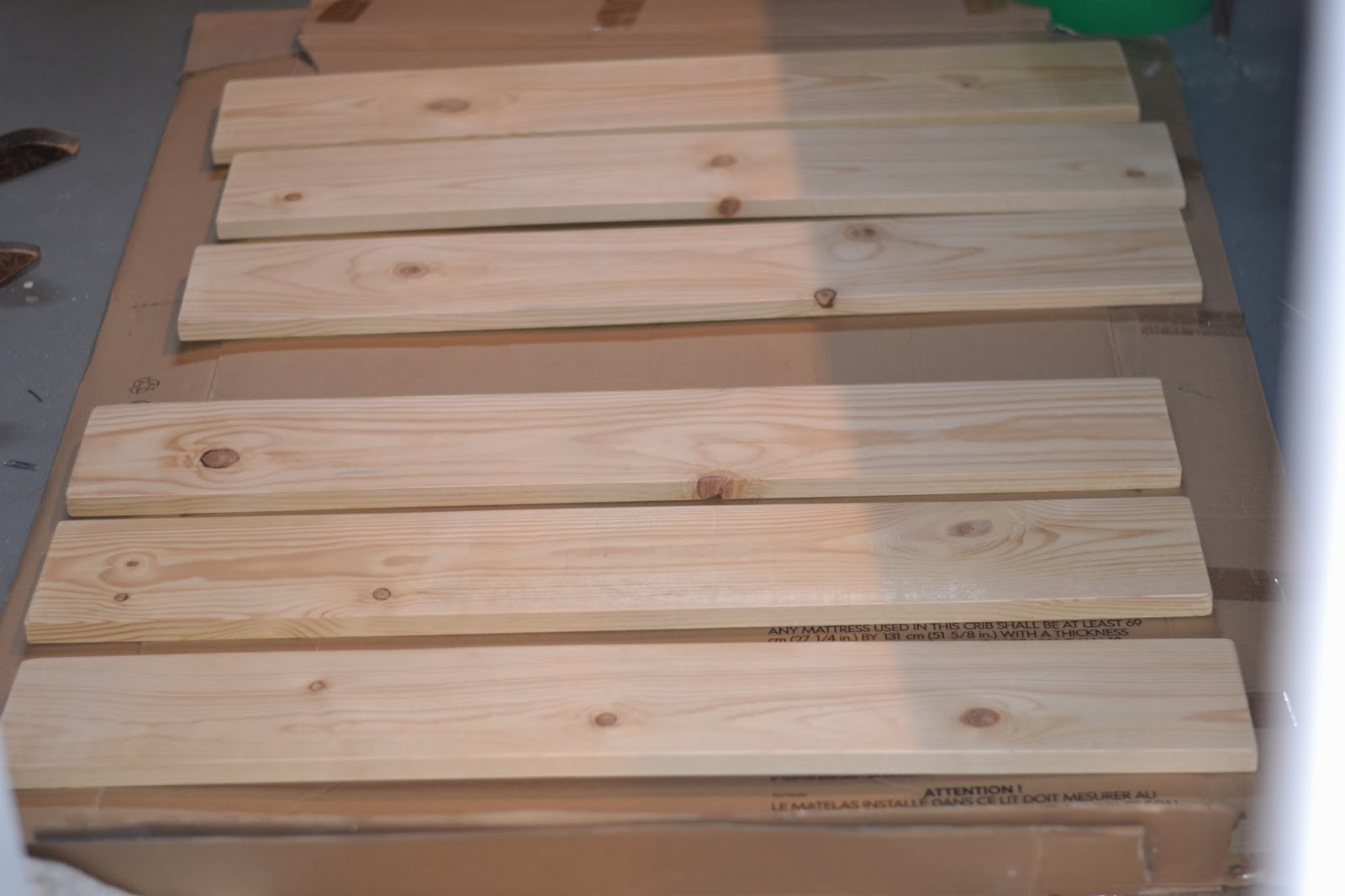 This was the first time I've used a pre-stain.  I'm not sure how much it helped, but I wanted them to look good...so I went ahead and did the extra step, though I wouldn't call it necessary. 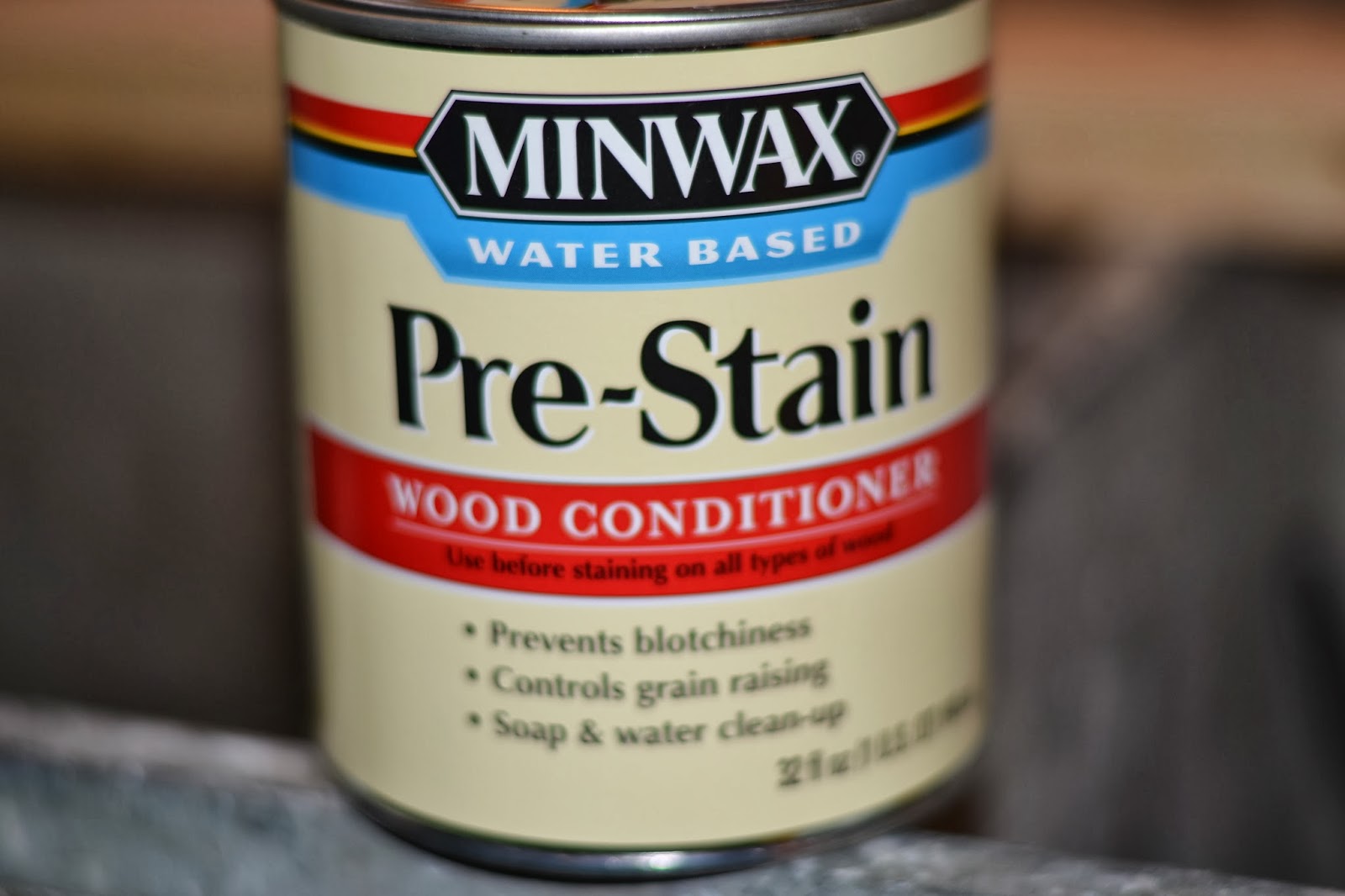 Then came the stain.  I used Jacobean...because I had some leftover from another project. 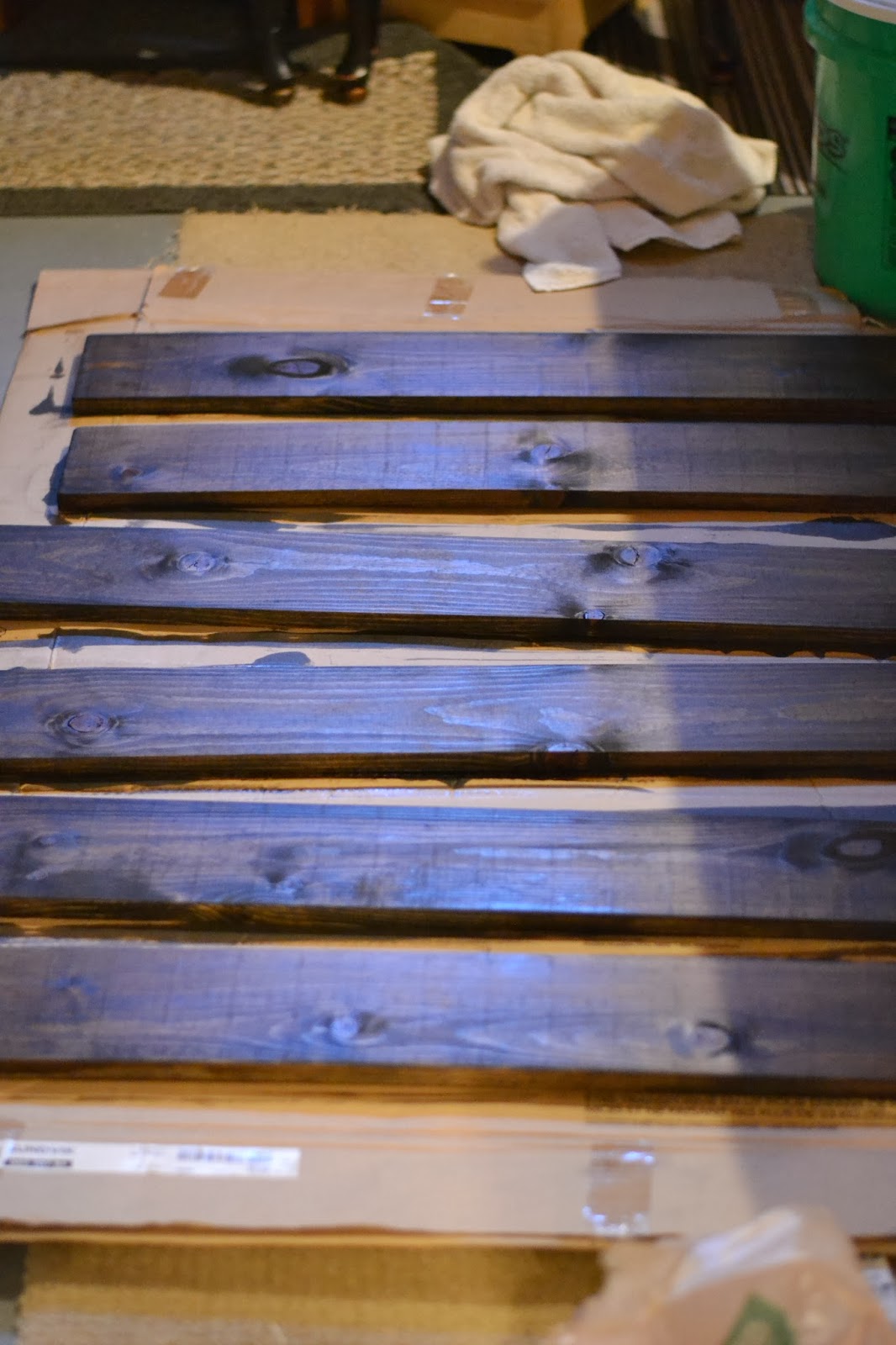 Then, I used a few coats of Poly to seal it up so it was nice and smooth. 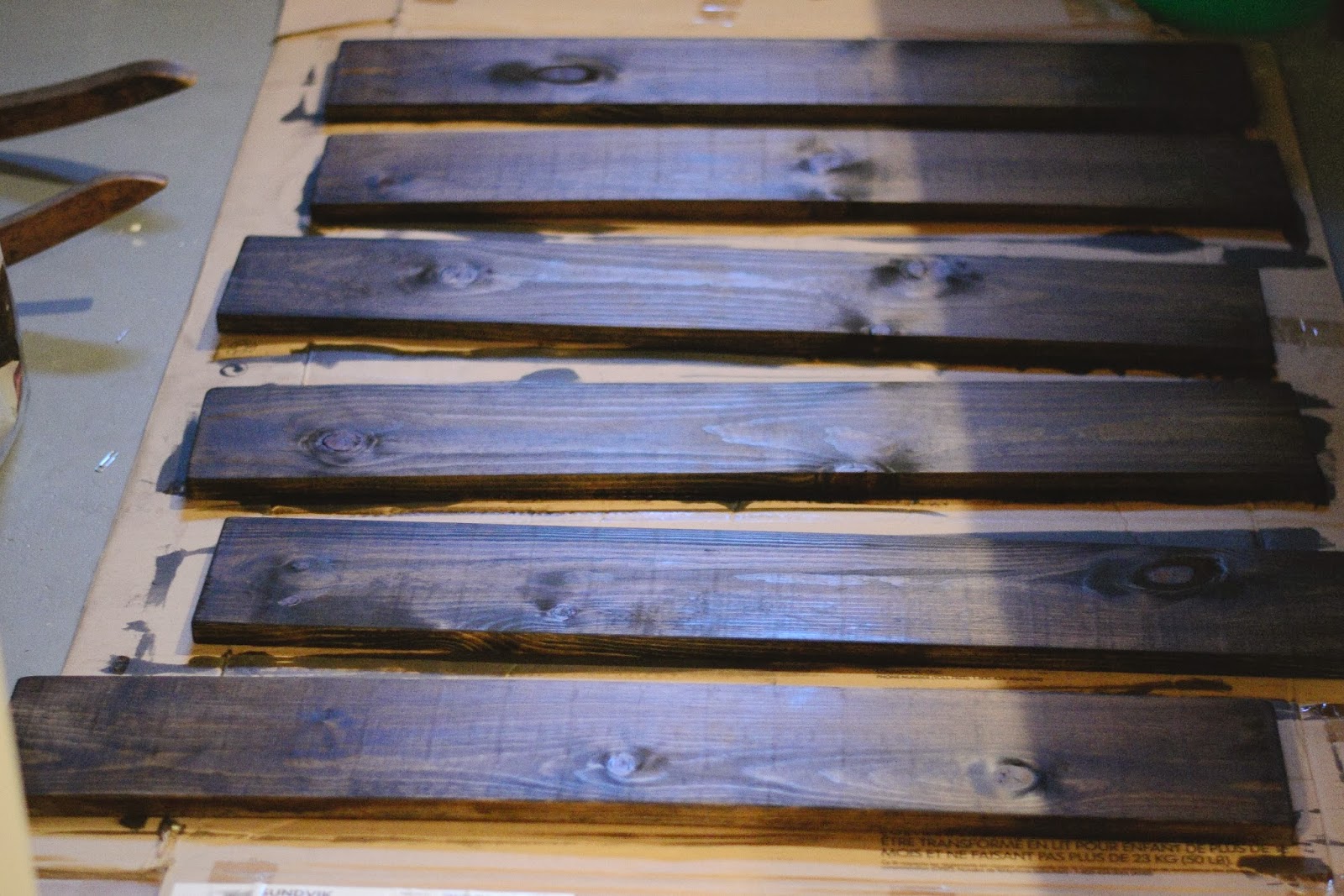 It's hard to capture what it really looks like (and don't mind the dark line in the picture above...just a shadow from the laundry tub).  But here is an up close and personal shot of one of the knots. 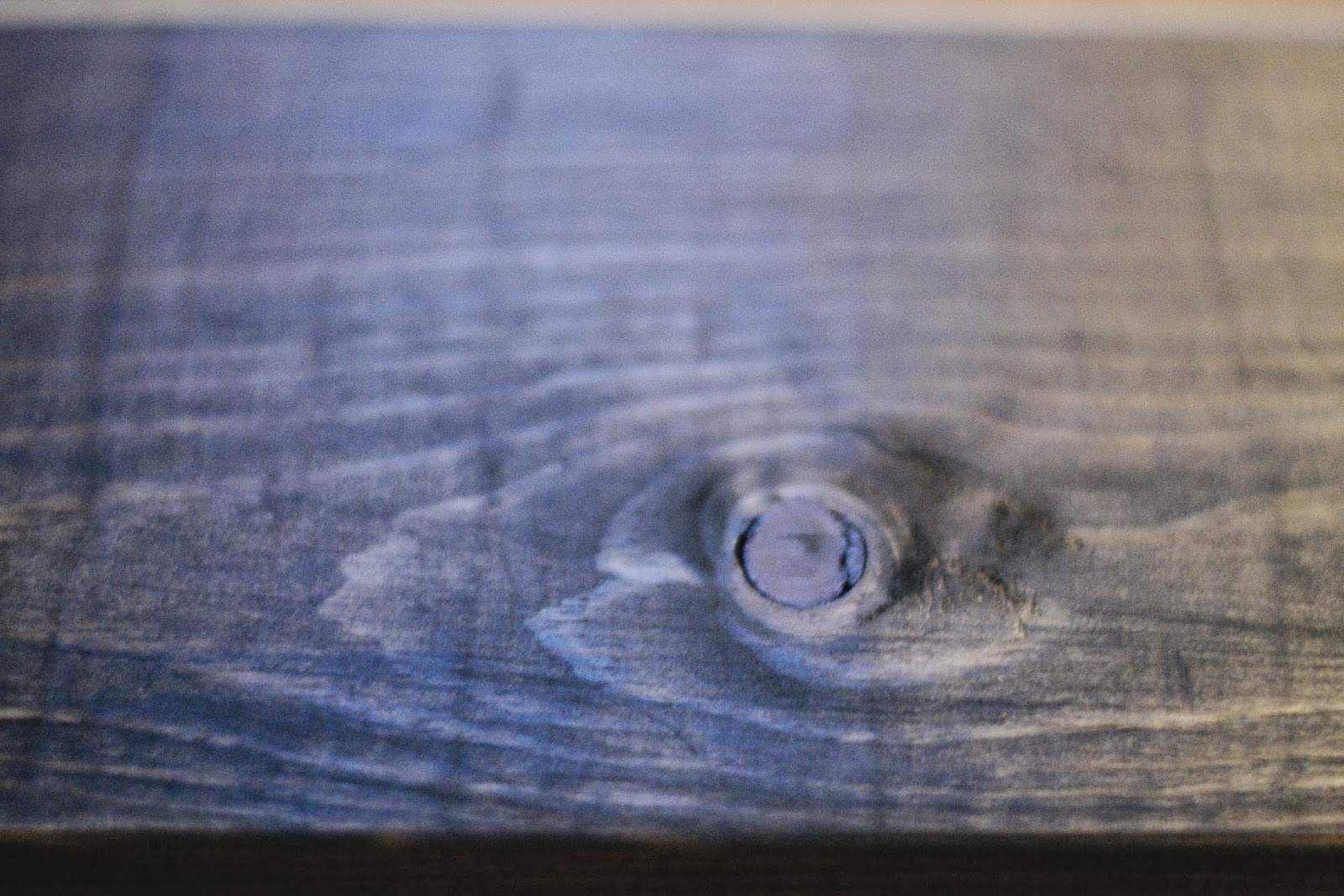 Then came assembly.  Without pictures, it's a little difficult to describe what we did.  But basically we built a 3 sided shelf with nail gun and wood glue.  We left the front side open.

Then we pre-drilled holes through the shelves and into the walls (while leveled) and used wall anchors to secure the shelves.  Then finally, we attached the front side of the shelf, using a nail gun.

Oh, I love them.  Now I have to do something about that dark IKEA bookshelf...another day:).  And that cute little boy with a backpack on....posing. 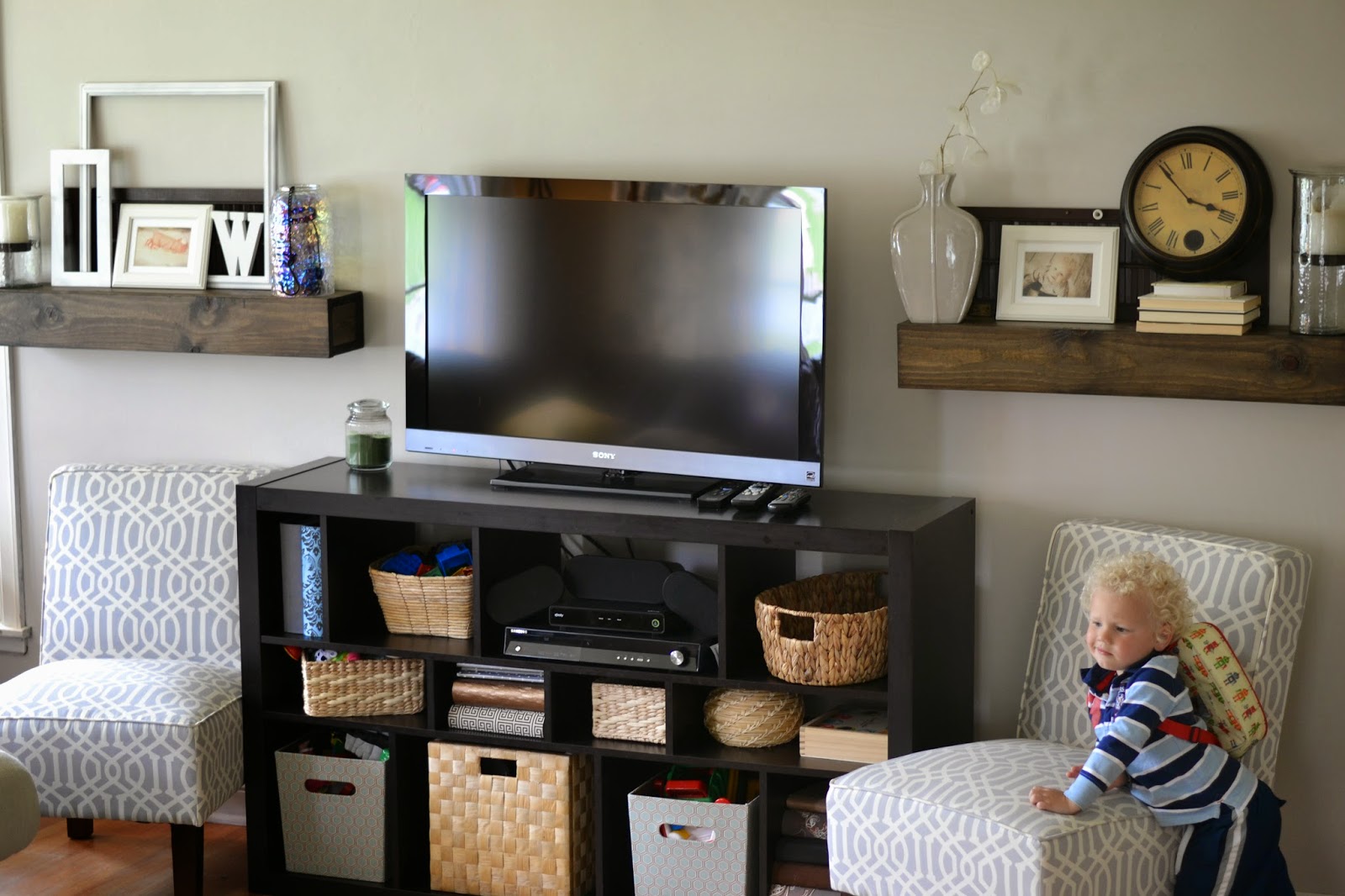 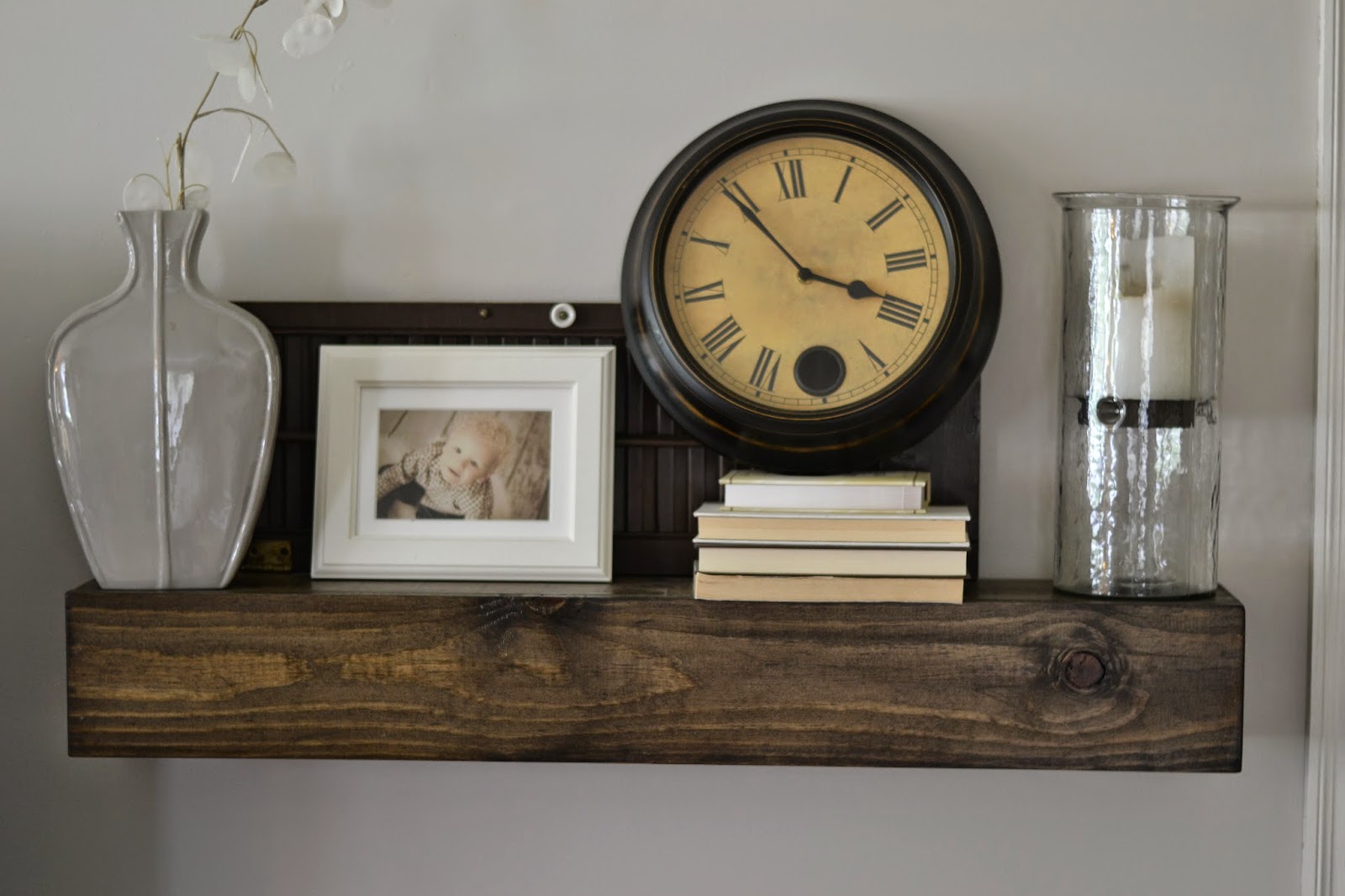 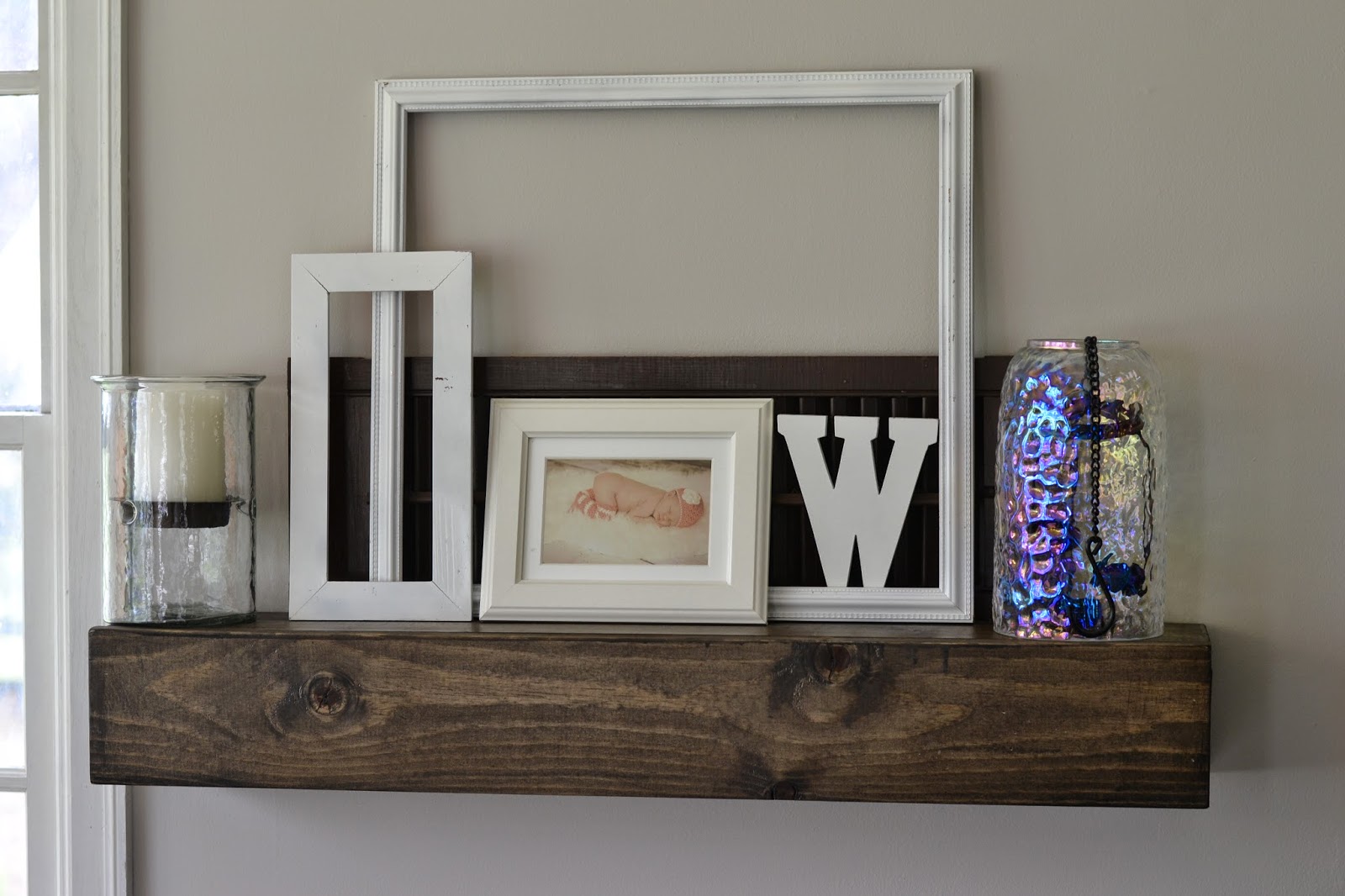 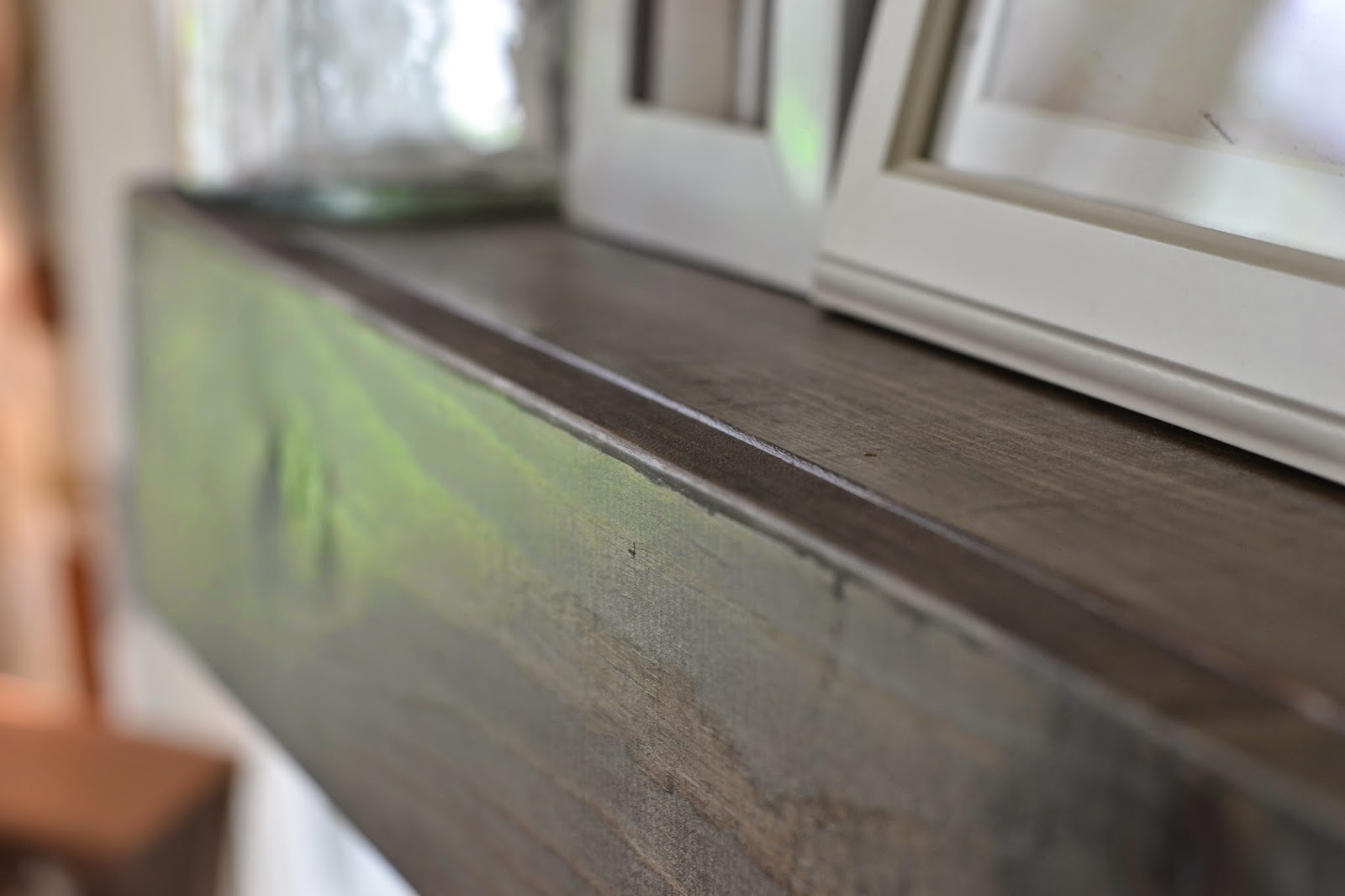 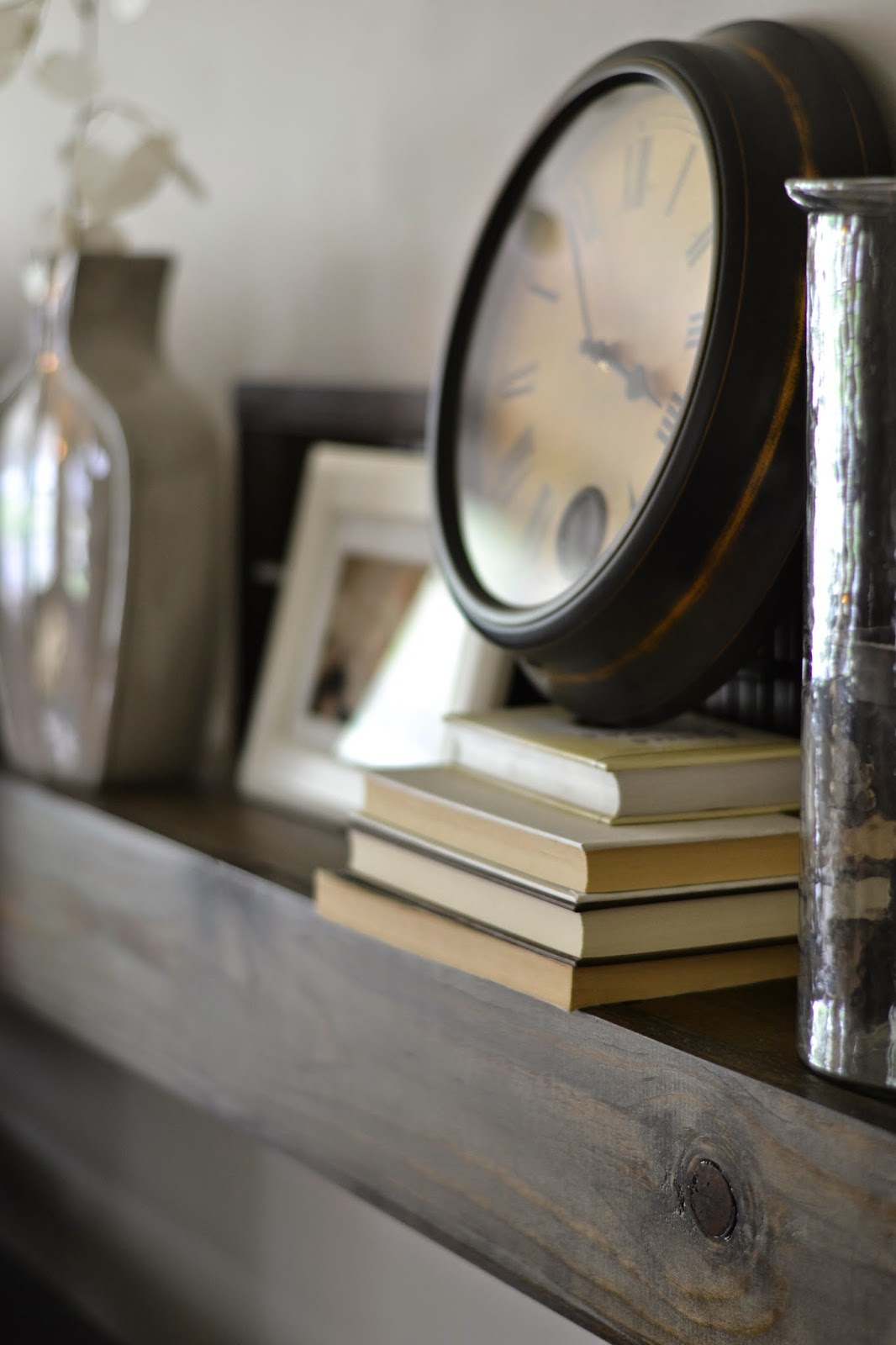