Rejoice always,  pray continually,  give thanks in all circumstances; for this is God’s will for you in Christ Jesus. 1 Thessalonians 5:18

I'm working really hard at living in the moment, keeping my to-do lists put away until it's time to do.  What I'm finding, is that, when I rejoice and pray and give thanks, the little moments with my little ones, become big moments.  A book here, a song together there, a dance party right in the middle of the kitchen, a thought--heard and validated, a memory created.  And when I didn't think it was even possible, I can feel my heart falling more in love with my God, my husband, my kids and my close family and friends.  When we do give thanks in all circumstances, God gives us things to rejoice about.  So let us give thanks, and rejoice!

Happy Thanksgiving!
Posted by Lesley at Thursday, November 28, 2013 No comments:


Mom, I don't want to be a Potty Train

So, one Thursday in mid-October, we took a trip over to visit our dear friends Keidra, Charlotte and Parker.  The kids played, Keidra and I caught up and somewhere in the middle, Charlotte said, "I need to go potty!" and went to the bathroom.  Griffin watched, and then went back to playing.  I didn't think much of it.

The next day, he kept taking his diaper off and sitting on the potty. So, I told him he could try big boy undies since we didn't have much going and could stick close to home for awhile.  And that was it.  I wish I could tell you that there was some magic trick, but he just decided he was ready and off he went in big boy undies!

Now, that is not to say we have been without accidents.  Oh, they have happened.  I even planned one to happen intentionally.  A few weeks in, he was starting to get a little too confident with his potty training and when I would ask him if he needed to go before we left, he would just say, "No, I can hold it the whoolllleee time."  Well, this particular day, I knew he would have to go, so to the park we went....lesson to be learned.  Well, the joke was on me.  When the accident came, he was on the ladder and not only was he wet, but he was stinky too.  He just looked over at me, and it happened in an instant.  Poor guy, didn't have any sort of warning.  He said, "Mom....uhhhh ohhh.  I tinkled....and....I pooped."  Oh geeze.  So we bee lined it home.  It was quite a mess to clean up, but it sure did reinforce the, "Let's just try before we go," lesson.

If I did have any hints, I would say....1. Wait until the child initiates (even if it's way later than you thought your kid would get it.  When they're ready, they're ready...it's not a competition). 2.  Get a toilet seat that just fits right on the big toilet (like this one).  It is so handy, there is nothing extra to clean, etc. 3. Let them try even when they're not ready to be in undies....and let them watch you.  The more comfortable you make them with the whole situation, the easier it will be when they're ready.  4. And this one is personal preference....teach your boys to sit (at least for now).  There is no way Griff is ready to stand.  Well, at Miss Deb's (Mom's morning) he stands, and he thinks it's the coolest thing ever, but I don't clean that bathroom...so that's fine by me!  5. Lastly, this advice came from a mom friend of mine...."just remember....it's only pee and poop."  So what if they have accidents, they will.  So what if they are when you're out...they will.  You just bring a spare pair of undies/pants and a ziplock and you'll be on your way.

I was pretty hesitant to "potty train" Griff.  With a baby around, I just thought it was easier to change his diaper a few times a day than to have to take him to the potty.  Boy was I wrong....it is wonderful.  He is so proud of himself and I am so proud of him.  He still needs reminders, but we've watched the Daniel Tiger enough to know, "If you have to go potty, STOP. And, go right away.  Flush, and wash, and be on your way!"

I'll leave you with this....all of this potty training business happened just before Halloween.   Griffin had been requesting to be a train driver for the months leading up to Halloween.  And when he would request to wear undies leading up to the day he decided not to wear a diaper anymore, I would say, "You can try the big boy undies, but we won't wear them all the time until you are potty trained."  So, the day or two after he was in full out undies, he turns to me and says, "Mom, remember I want to be a train driver....not a potty train."
Posted by Lesley at Wednesday, November 27, 2013 No comments:

It happened again.  I blinked and Hattie got another month older.  Soon I will be calling her my little lady instead of my little sweet pea, but let's not get ahead of ourselves.  Hattie.  As 9 month olds go, you are pretty darn near perfect.  You just popped your first tooth out (your bottom left), and you have all kinds of new babble phrases.  You still are immobile, but we're not complaining.   I think that since Griffin just brings the fun to you, there is no real motivation for you to start moving.  You sit like a champ and have mastered the sitting-lunge when you really want to get something.  You love to wave your arms and clap your hands.  It has been fun to watch your cognitive development this month, as you really understand games like peek-a-boo and "How big is Hattie?" You even play peek-a-boo behind the dining room curtains while you're in your high chair (and you sometimes use them as your napkin:). 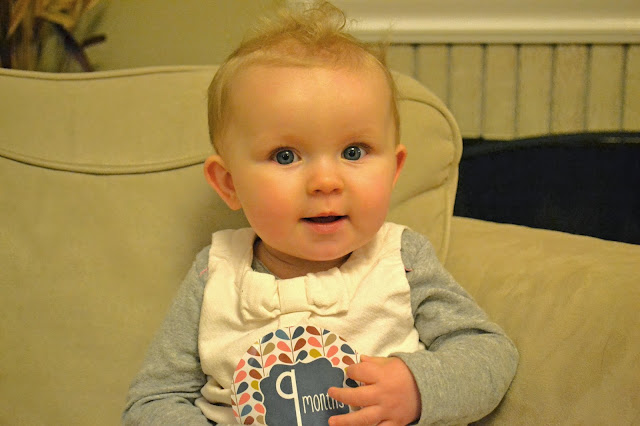 Your schedule hasn't changed much, still sleeping 7pm-7/7:30 am.  You nurse/eat breakfast (bananas and baby oatmeal), play, sometimes take a quick snooze around 10:30, nurse/lunch around noon, afternoon nap 1-3:30/4, nurse/snack, dinner at 5:30 and nurse and to bed at 7.  And I don't know if it is a second child thing or what, but you are so easy to put down.  I just put you in your sleepsack with a nuk and a silky and you just chatter until you fall asleep.  You usually sleep on your back but have started to sleep on your side, but never your stomach.  Sometimes when you're on your side and you roll too close to your stomach, you fling yourself back to your back....it's pretty funny.  And Hattie girl, you wake up so happy.  I love hearing you from my bed or the kitchen, just cooing, babbling.  I'm not sure how long you would babble before you started to cry because after even a few minutes I just can't wait to see you.  You love your bathies.  You could sit and splash in the tub for hours.  We recently took you to the pool at Lifetime and you just sat and splashed while watching all of the big kids swim.  Our trip to Florida can't come soon enough! 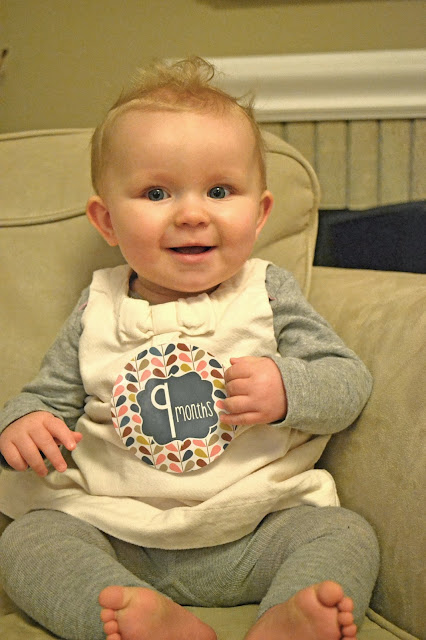 You eat all kinds of foods now, but you're not wild about grabbing at pieces of cut up food.  You still love to be spoon fed the mashed up stuff (I think you just like to get your tummy fed first and then start toying with the idea of finger foods).  You really love chicken noodle soup...you downed a ton over at Auntie Liss and Uncle Joe's! 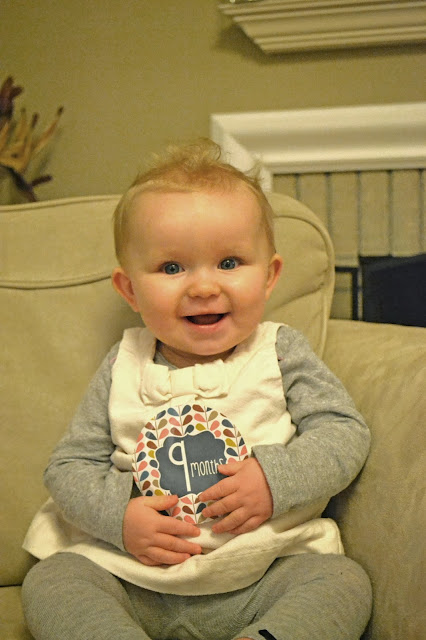 Hattie, as it is Thanksgiving week, I just want you to know how Thankful you are for your brother.  He entertains you nonstop, he tickles you, makes you laugh, plays peek-a-boo and even tries to get me to wake you up from naps when he misses you.  Today he saved you from trying to eat a Band-Aid, and he told on dada when he tried to "put the little sweet pea to bed without a song."  He makes up cute little nicknames for your, like "my little day-day," "Hattie-girl," "sweet pea," and so many others.  I can only hope that once you can reach his toys, he still treats you so well.  And while I'm so not ready for you to be a teen, I'm certain you'll have Griff looking out for you. 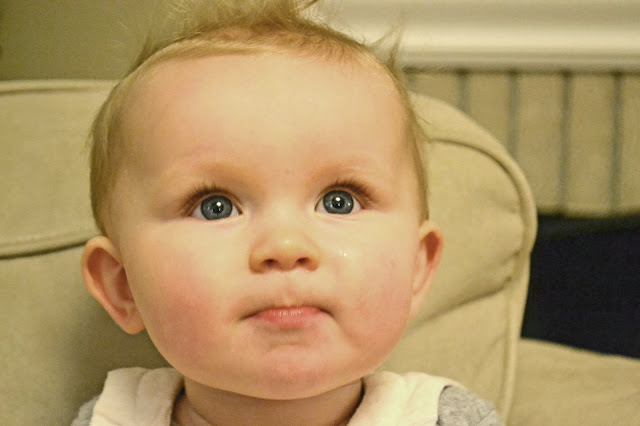 You still cling to your mamma, especially in new situations.  You are cautious and hesitant, taking in all of the new information before letting your guard down.  But then, you do, and you giggle and smile and make eyes at everyone.  When you spend time away from me, you do very well.  The ladies at MOPS all say that you are just the sweetest little thing.  I just try to make sure that when I hand you over you don't see me leave.  If I'm around and you're not in my arms, everyone is going to hear about it. :)  I do love how much you love to be with me, I love being with you too.  And I am sooooo thankful for you, you have changed my life and you make it better, every.single.day. 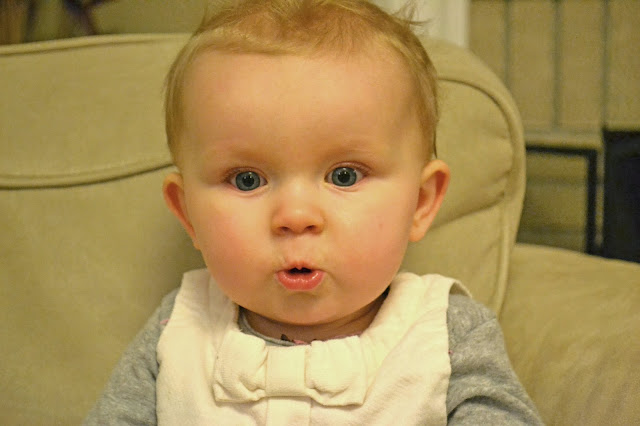