All of the sudden, Hattie is not an infant anymore.  She is a baby.  Full on giggles, dipping her toes in the pool and sitting in a high-chair baby.  And she is actually 5 months, today. (I'm not super late!) 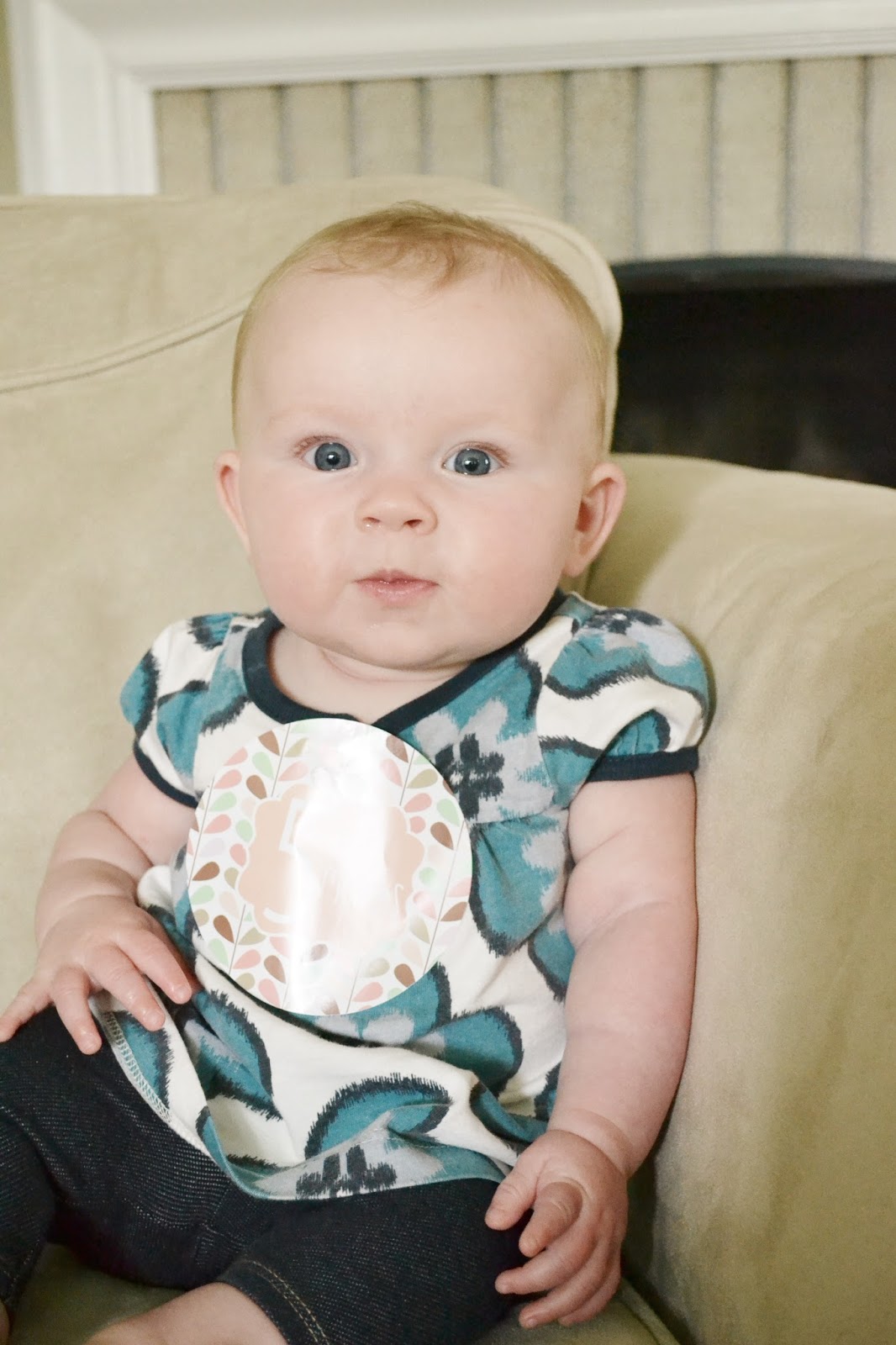 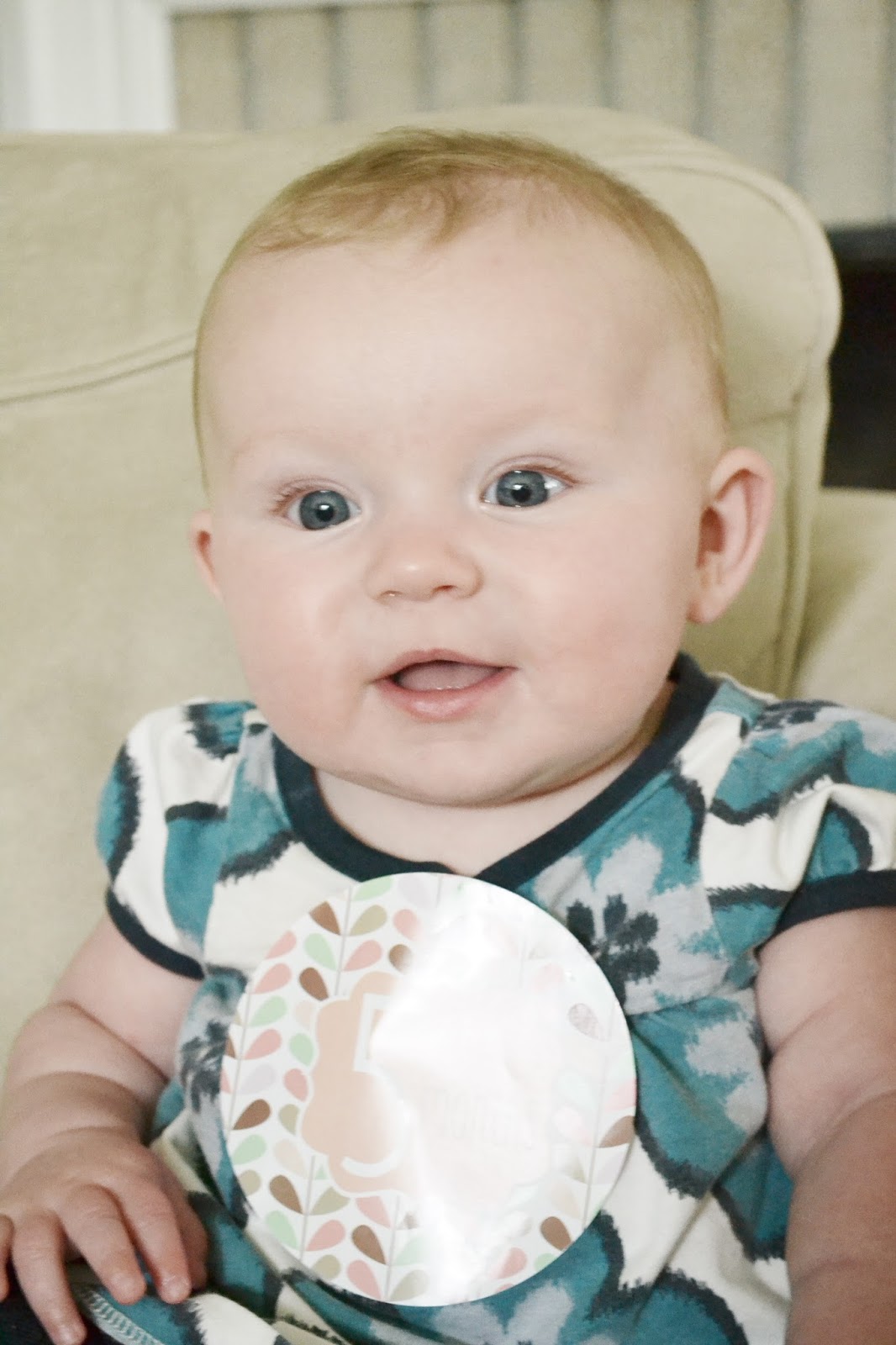 Not much new in the schedule department.  Nursing at 7 am, 10am, 1pm, 4pm and 7pm and eating maybe 1-2 oatmeal cereal meals a day (just following a feeding).  Her morning naps are still unpredictable depending on what we're up to, but she's doing great most afternoons sleeping from about 2/2:30-4/4:30.  She still likes her little Aden Anais lovie on her face, so I try to sneak in and take it off when it's fully covered.  What a stinker! 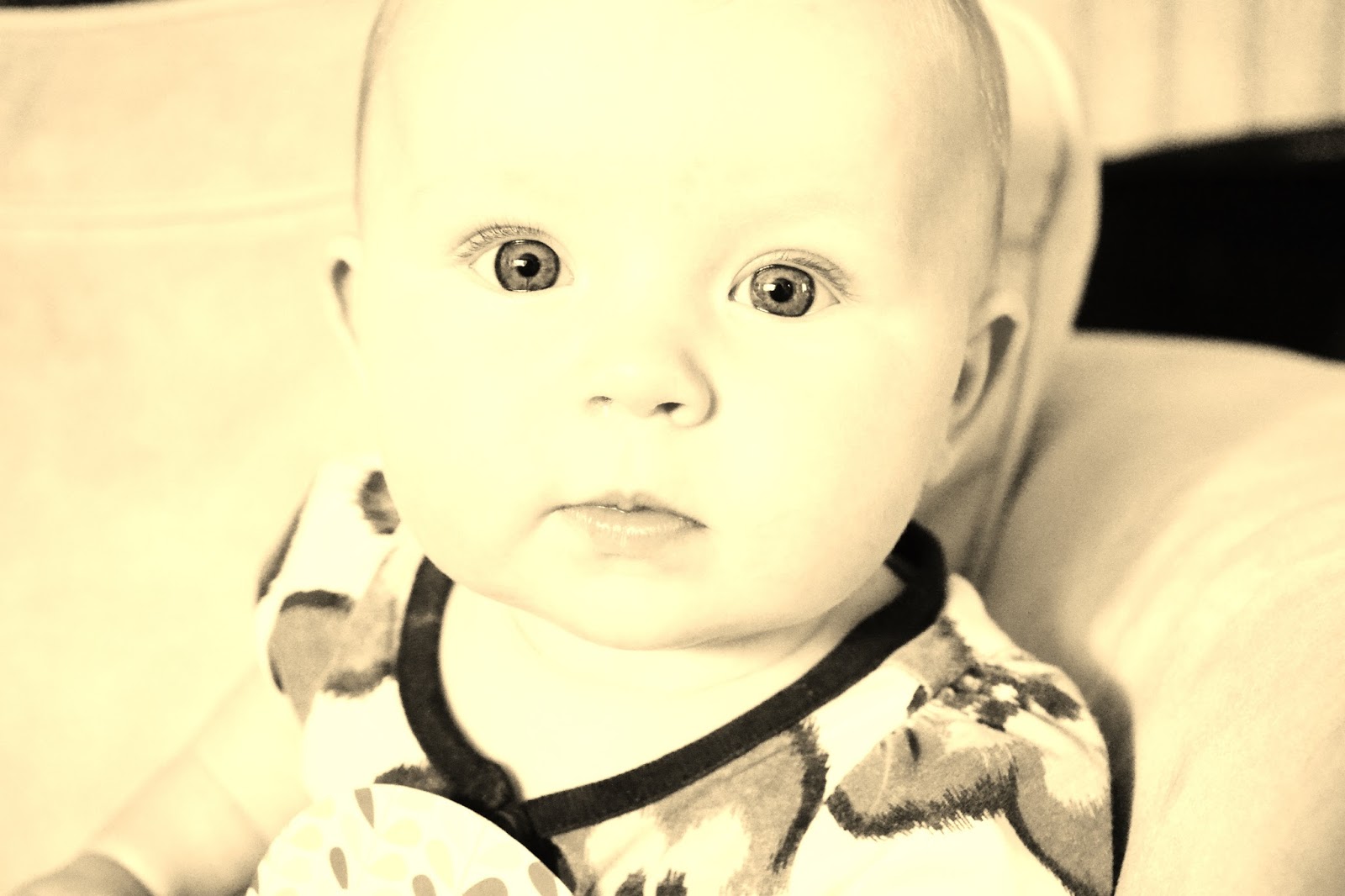 She loves to do "happy baby" yoga pose, especially while in her birthday suit.  As soon as she is on the changing table she lifts her feet right up and holds them with her hands.  She is still not crazy about playing with toys...she would much rather sit on someone's lap and chit-chat.  But you can't quite understand her yet because her hand is always in her mouth. 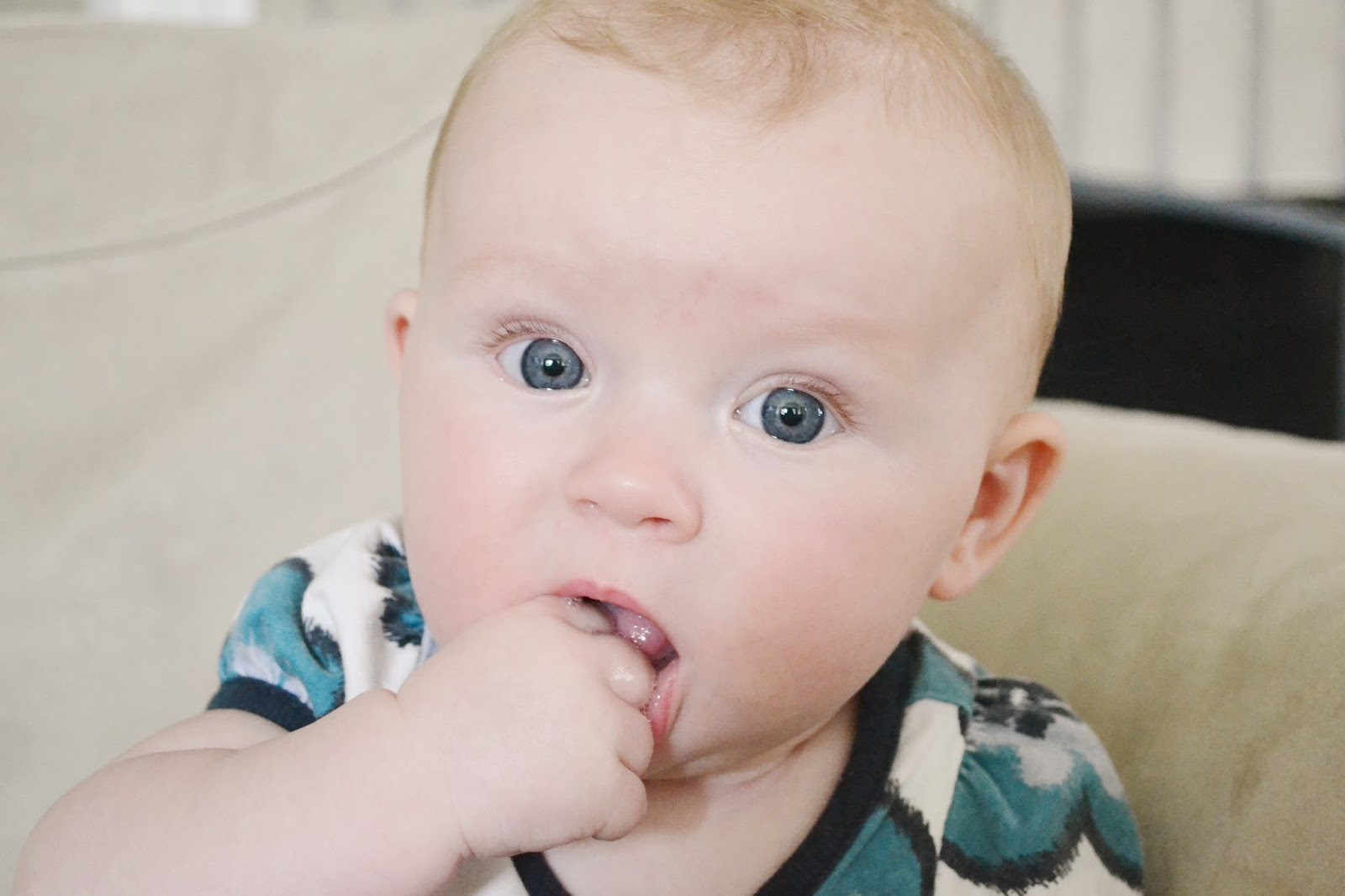 Her spitting up has gotten better, some days are worse than others.  But she is in a total blow-out phase.  She blows out almost every time she poops...partly because she poops while she is in the high chair and I think there is no where to go but up.  She doesn't fit in her cloth diapers yet because her chubby legs are too big for the diapers that should fit her.  And the smaller ones aren't absorbant enough yet.  So, we're stuck rocketing poop right up her back a few times a day.

She loves to spend time outside.  She is so content when people are conversing and hanging out, and even tries to join in the conversation.  She still loves to watch Griffin and is starting to watch Cooper.  Other than peek-a-boo and tickling, the only thing that can make her laugh is Griff or Coop playing wildly--she thinks it's hilarious.  And it is so obvious she already looks up to big brother Griff. 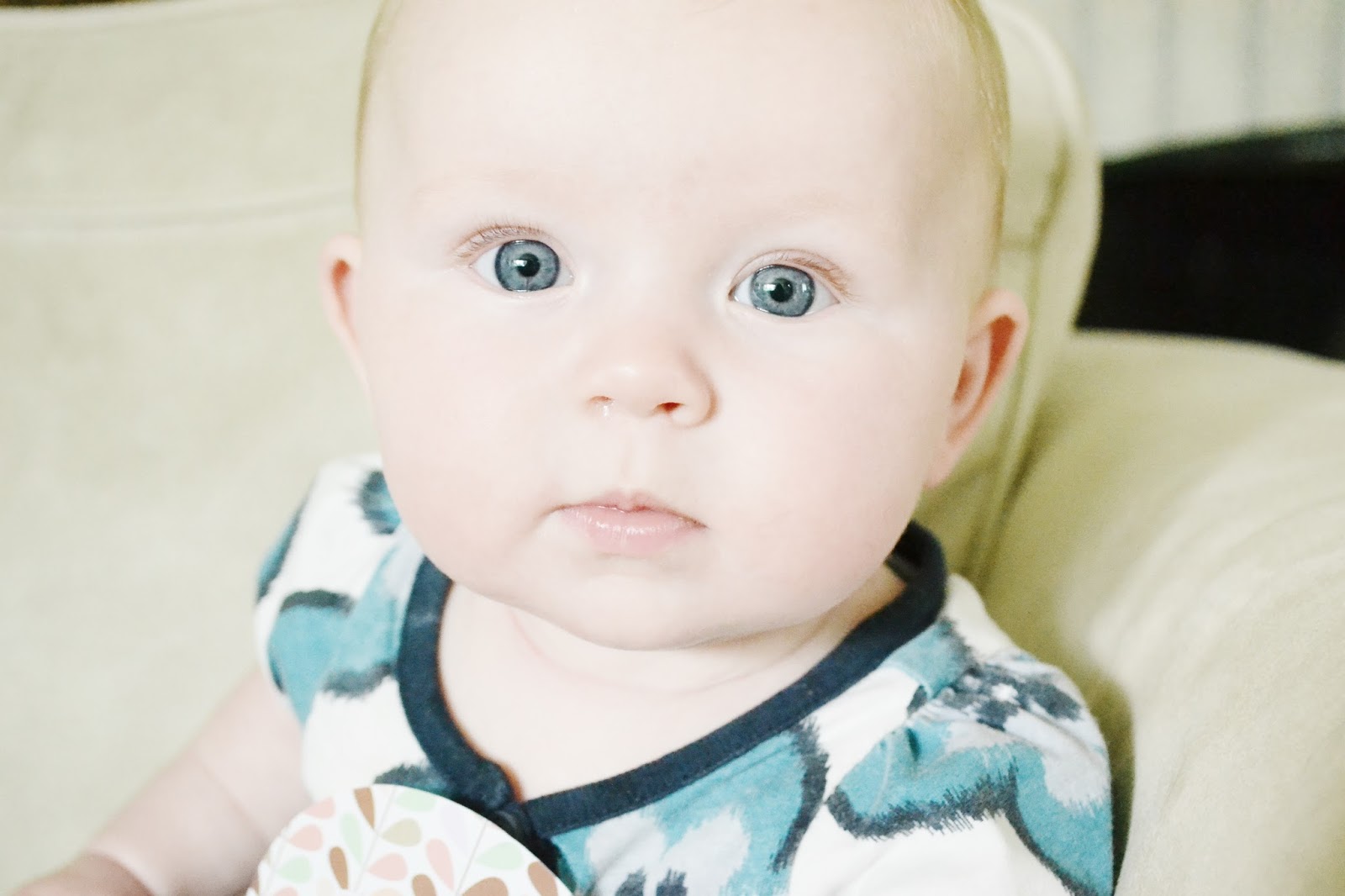 Hattie, you couldn't be sweeter.  Smiling all the time, you light up the room.  Your sweet little voice coos and giggles and your movements are so baby-like and perfect.  As much as you love watching us, we LOVE watching you.  I can't believe you are 5 months old...you are such a big girl!
Posted by Lesley at Thursday, July 25, 2013