I know this is super late, but I had to let the hype of the holidays settle down to really figure out where all of the new stuff would go and Griff had to try it all out.  First let me just say how blessed we (and especially Griffin) are.  I know grandparents love to spoil their grandkids, and Griffin being the only on my side and one of three boys on Nate's side....let's just say there were plenty of toys to go around.  But more than being blessed with stuff, we are just blessed.  Blessed by the love of family, and the love of our Savior.

It's been a little over a month since Christmas and it is so fun to see how Griffin's interest in toys morphs.  Daily.  And especially when we're good about keeping him guessing (ie. hide certain toys, while keeping others available so when we bring out the hidden ones, it's like they are brand new!).

So without further ado, I just wanted to highlight some of the highlights from the big day....


Most-energy wasting or Most-doppelganger: Gyffy
When Griffin is in the mood to tackle something, ram his vacuum or car into something or pull Cooper's tail, Gyffy has been such a good sport, and takes it very well.  And yes, his name is Gyffy and yes, Griffin calls himself Giffy. 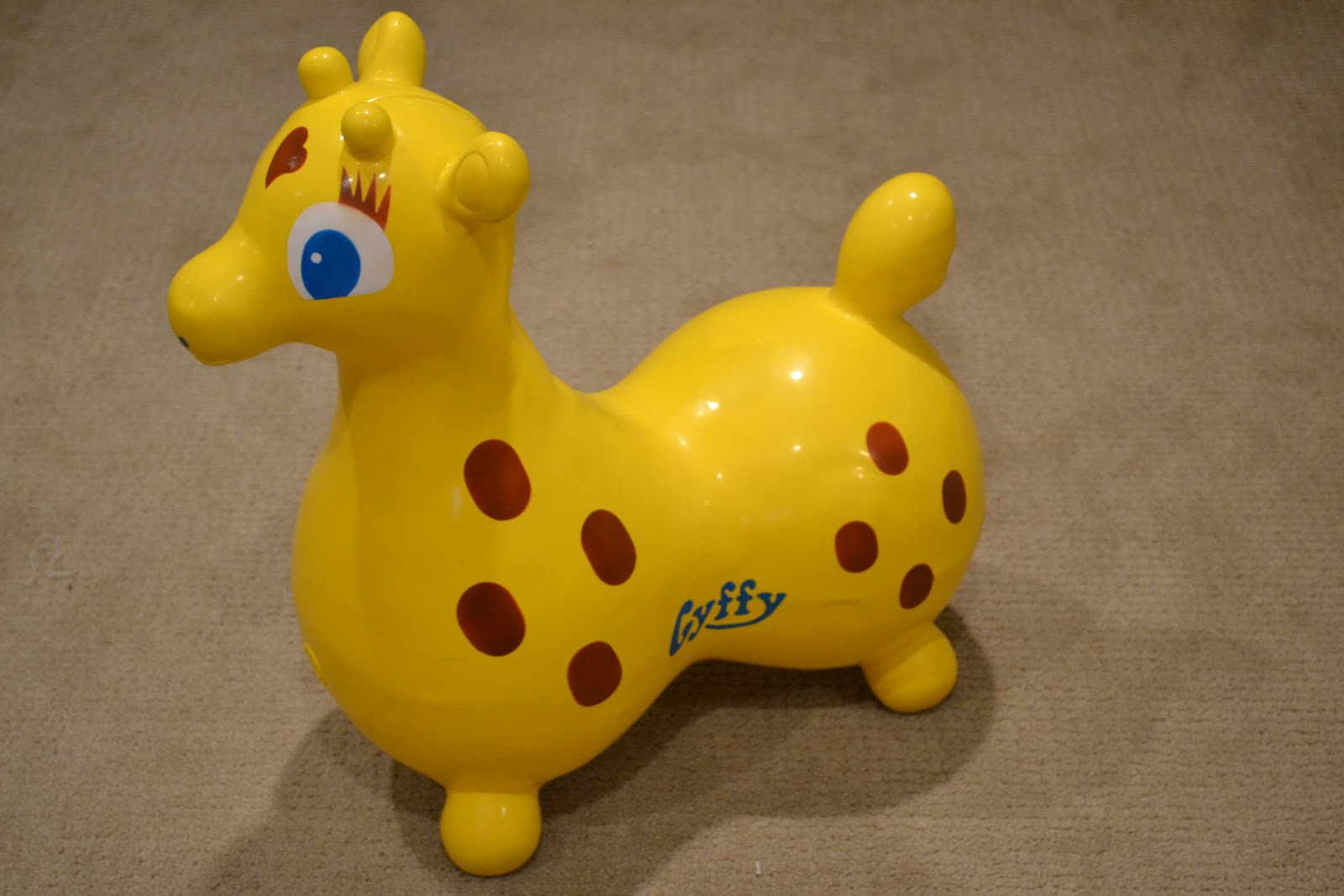 Most Season Appropriate: Gopher outfit
Viking season is over, Twins haven't started up yet and the Gopher BBall team is actually pretty good and fun to watch.  Plus Griffin has spent some time learning the fight song....more on that later.  Anyway, now instead of daily requesting his Viking Jersey, he at least has another jersey-esk outfit in the mix.

*Picture and Video coming soon (hint: Griffin is practicing his U of M fight song)

Most likely for Mom to initiate play with: Tie--Car Racing and Gertie Ball
I love this car racing game.  First of all it is adorable, made of wood and it's really loud when you race the cars.  This is one of those toys where the more I show Griffin how to play with it (ie. fun ways to race, make noise etc.) the more he enjoys it. 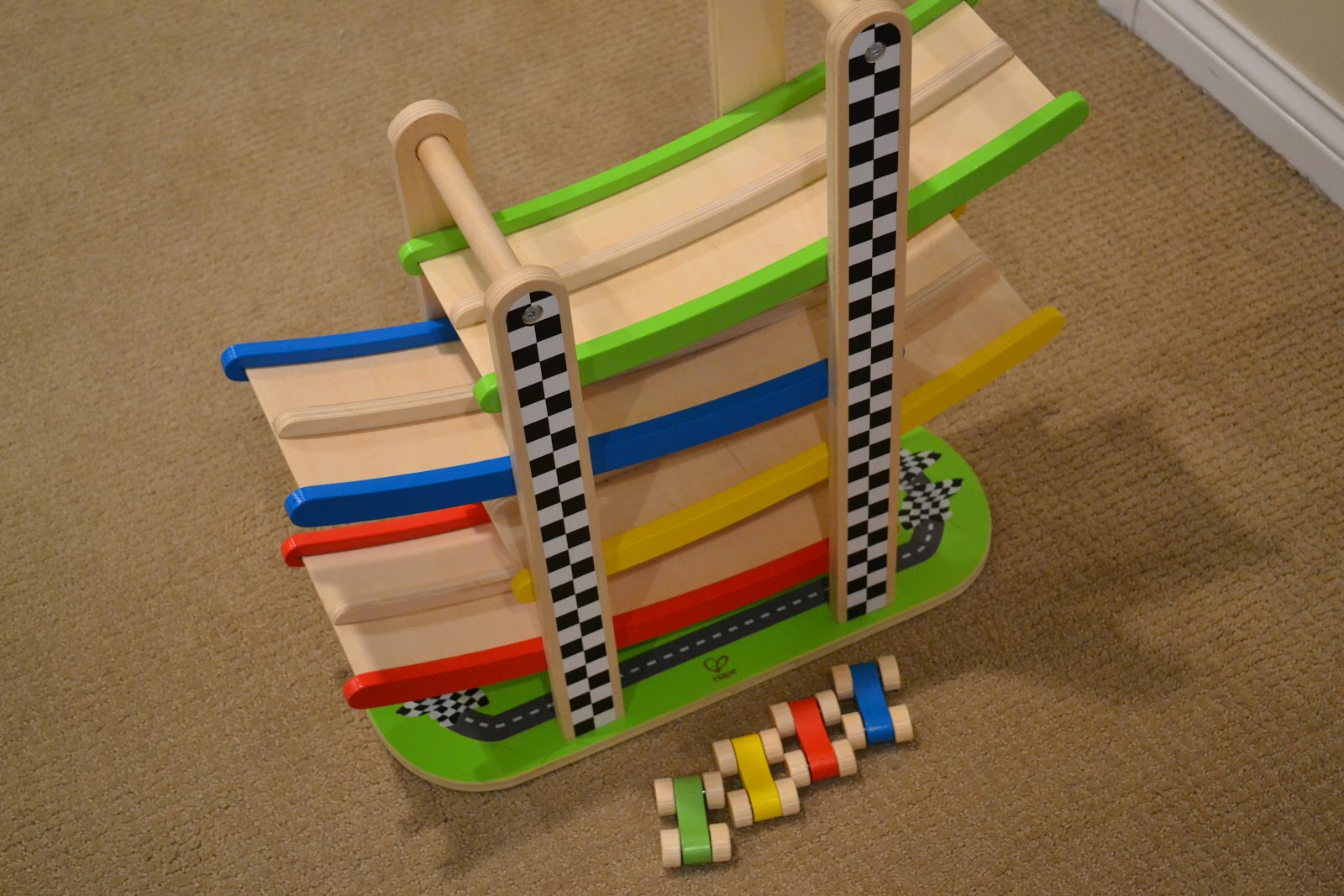 This Gertie ball thing is fun.  It reminds me of some kind of ball we had as a kid.  Griffin loves to dunk any kind of ball but I like this one the best. 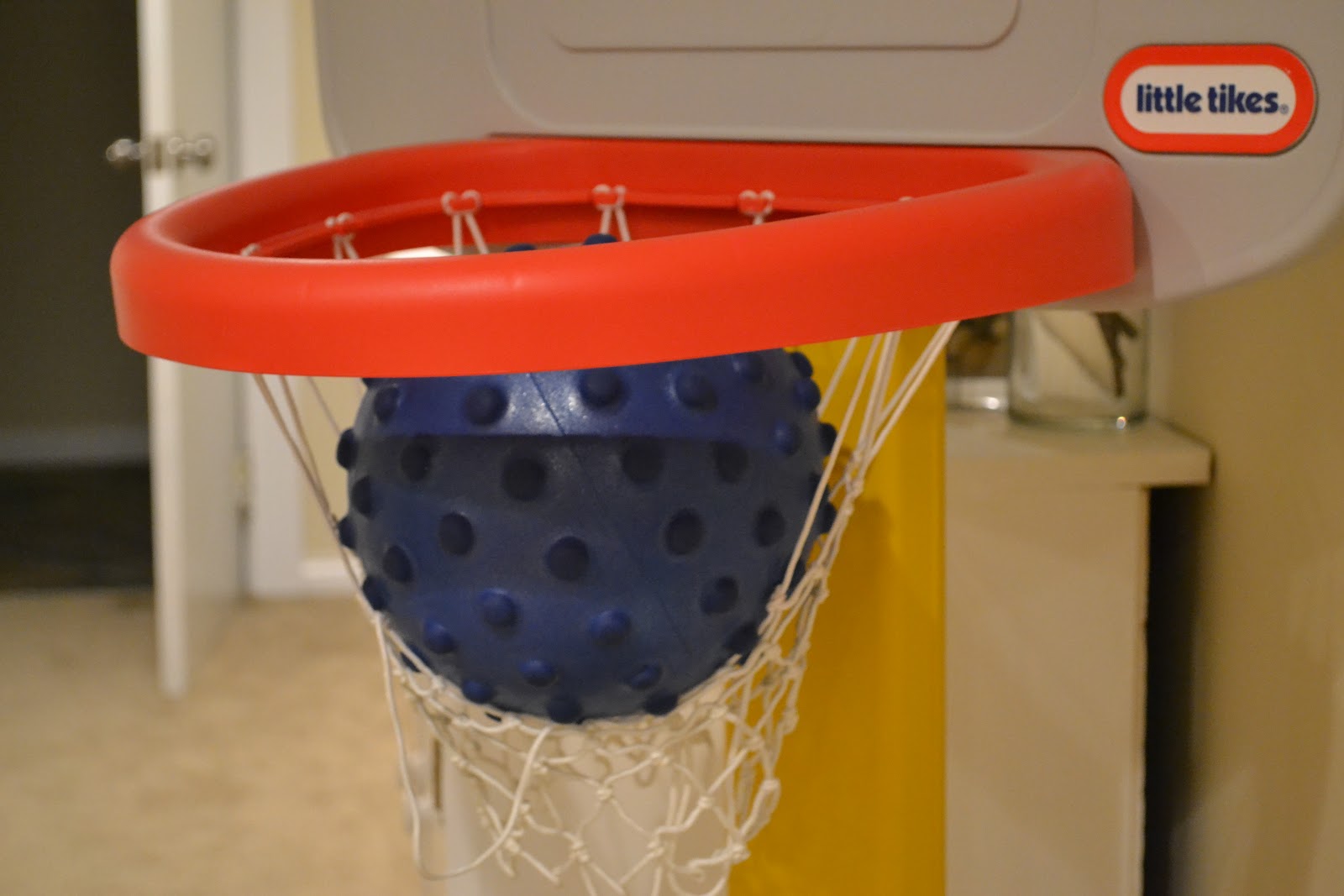 Most cleanly/Most helpful: Vacuum Cleaner
Too bad kid vacuum cleaners don't actually clean.  Because our basement would be free of Cooper clumps (hair that is) if this vacuum actually worked.  Griffin is so funny when he vacuums.  He does this extend and pose thing each time he pushes it (I wonder who he is watching vacuum?:). He also loves to watch himself vacuum in the mirror.  This was one toy I was worried about getting at home because he loves to vacuum everywhere we go that has a play vacuum.  But his love for vacuuming has not wavered.  He really is Pa's grandson:). 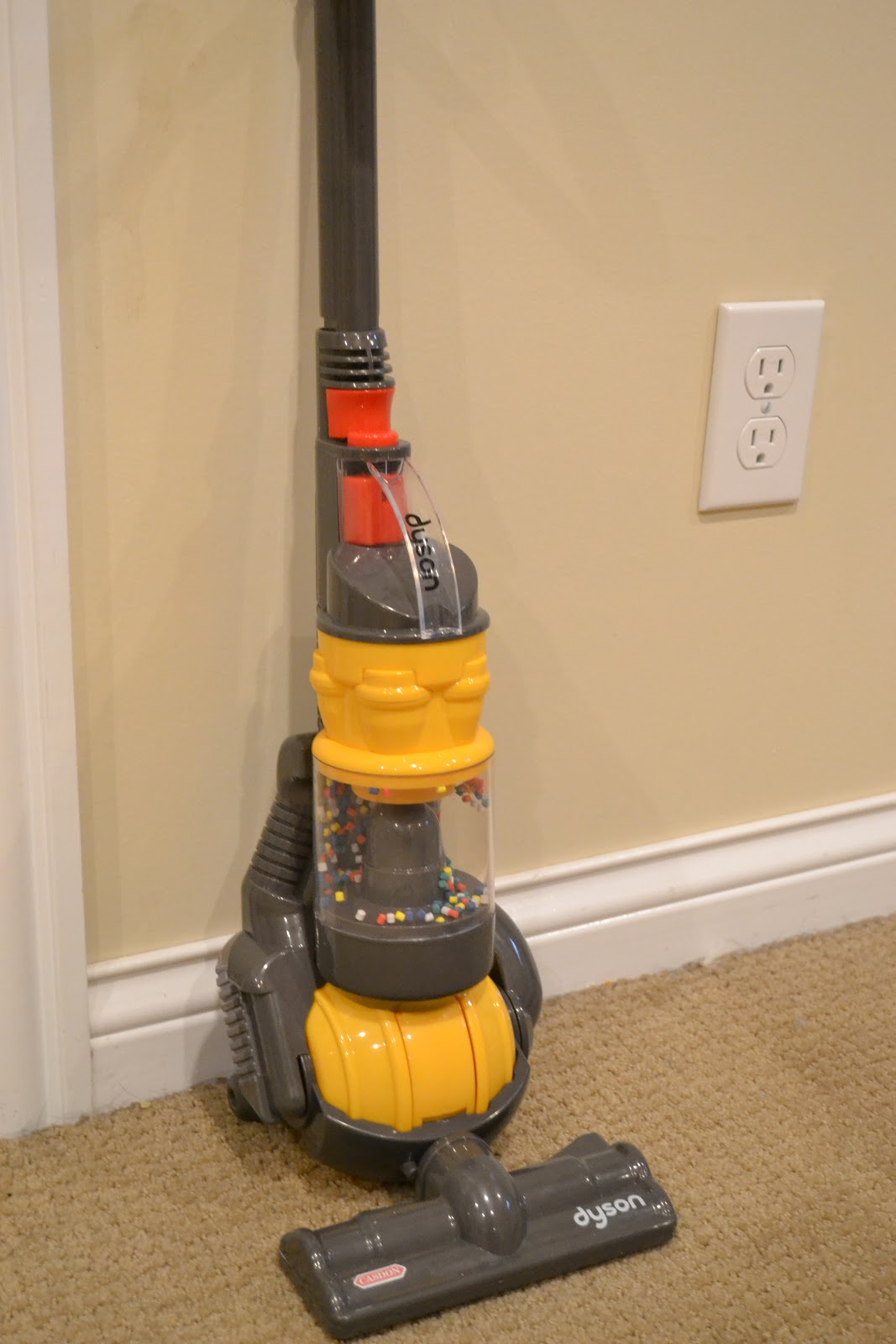 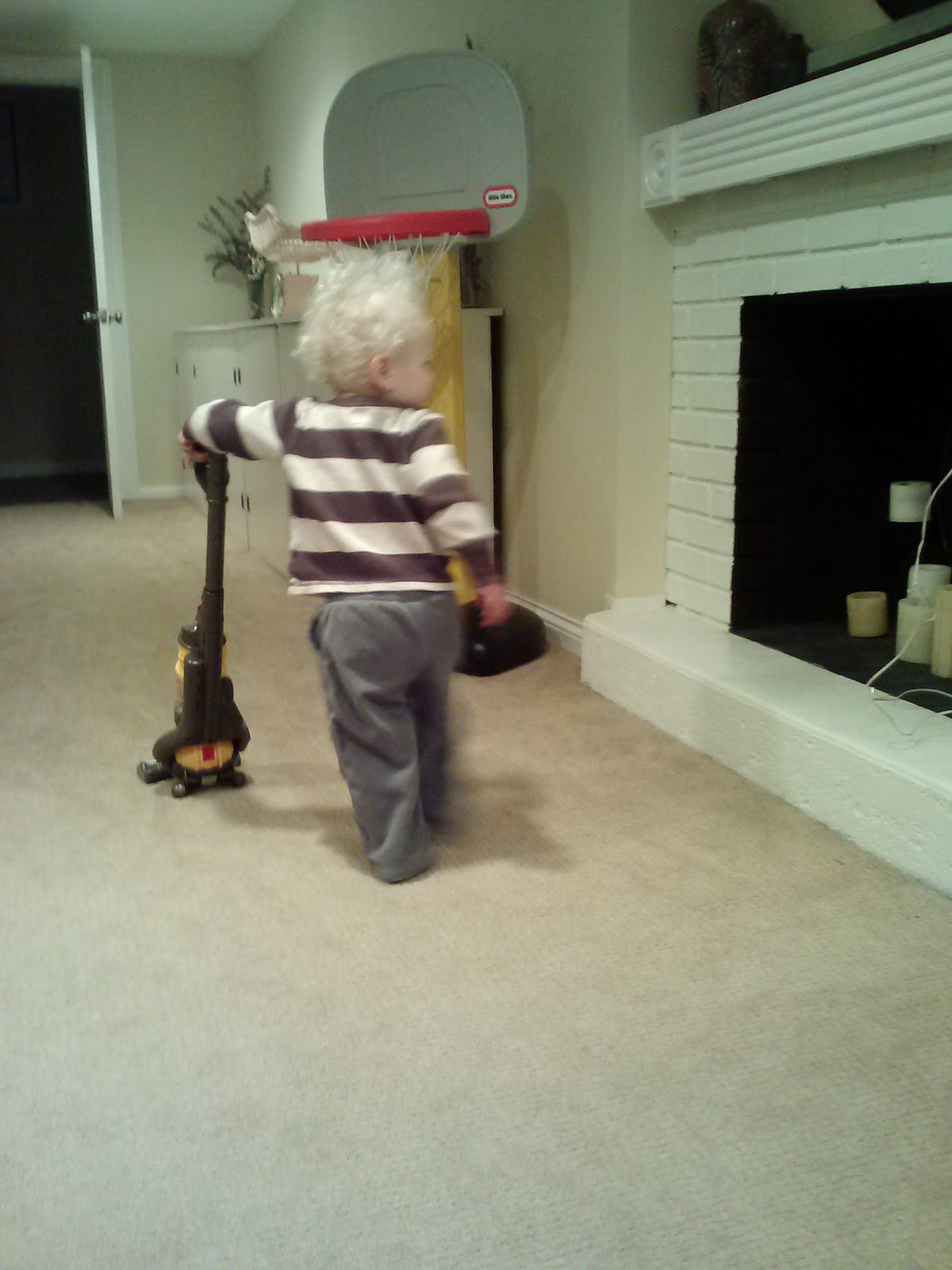 Most personalized: TIE-Thomas and Charlie Train & "Griffin" Backpack and Klean Kanteen
Thomas and Charlie trains were from Uncle Tom and Uncle Char...can't get any better than that.  They talk too and the purple one (Charlie) calls himself "Cheeky Charlie," and Thomas says, "Bust my buffers!"  Griffin actually said, "Bust my buffers!" in an appropriate context the other day.  Hilarious. 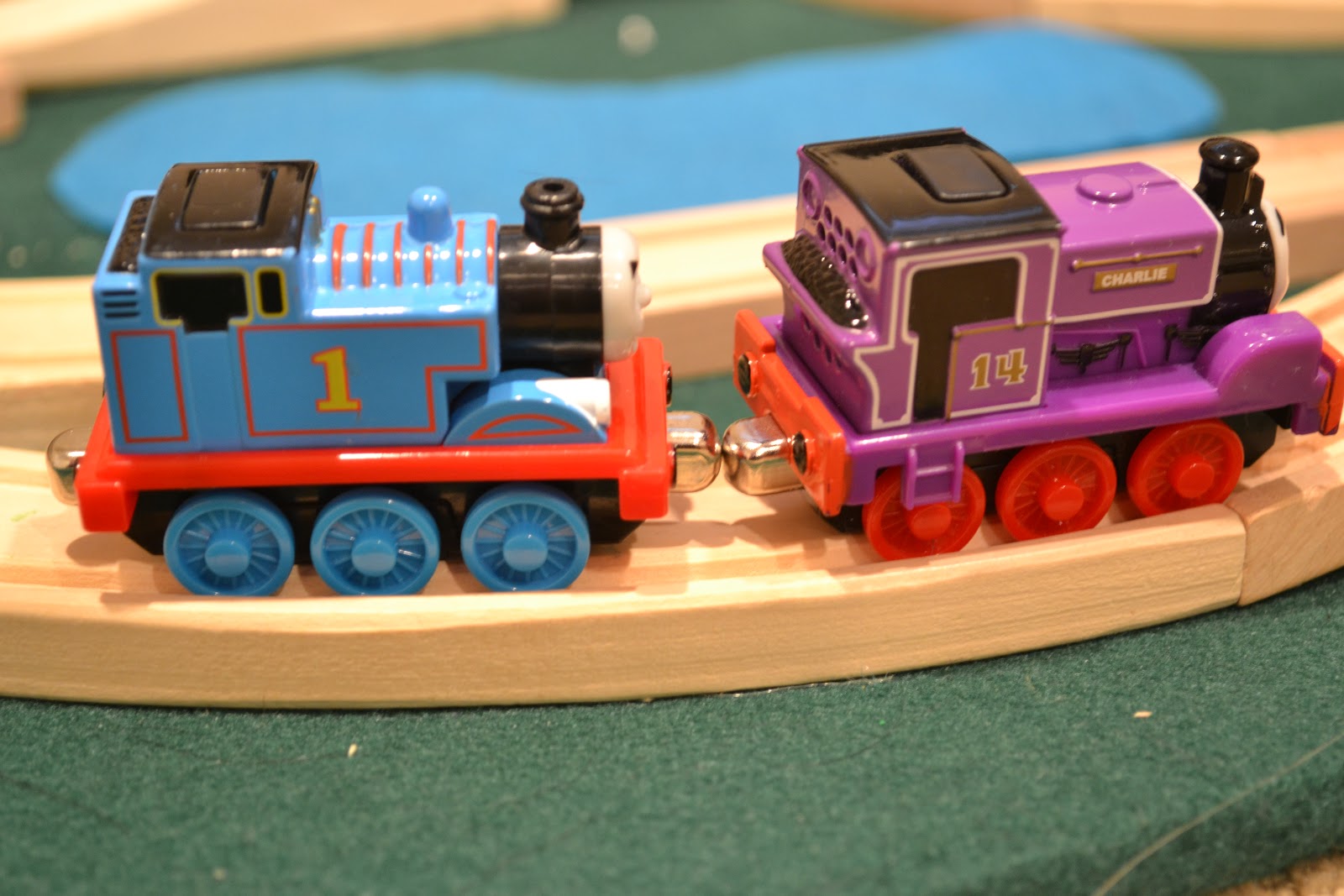 Griffin also got a personalized backpack and kanteen.  He loves them.  He takes his robot backpack everywhere.  It's actually a lunchbox that my mom sewed straps on to make a backpack!  And how fitting that the kanteen has a "Cooper" on it?! 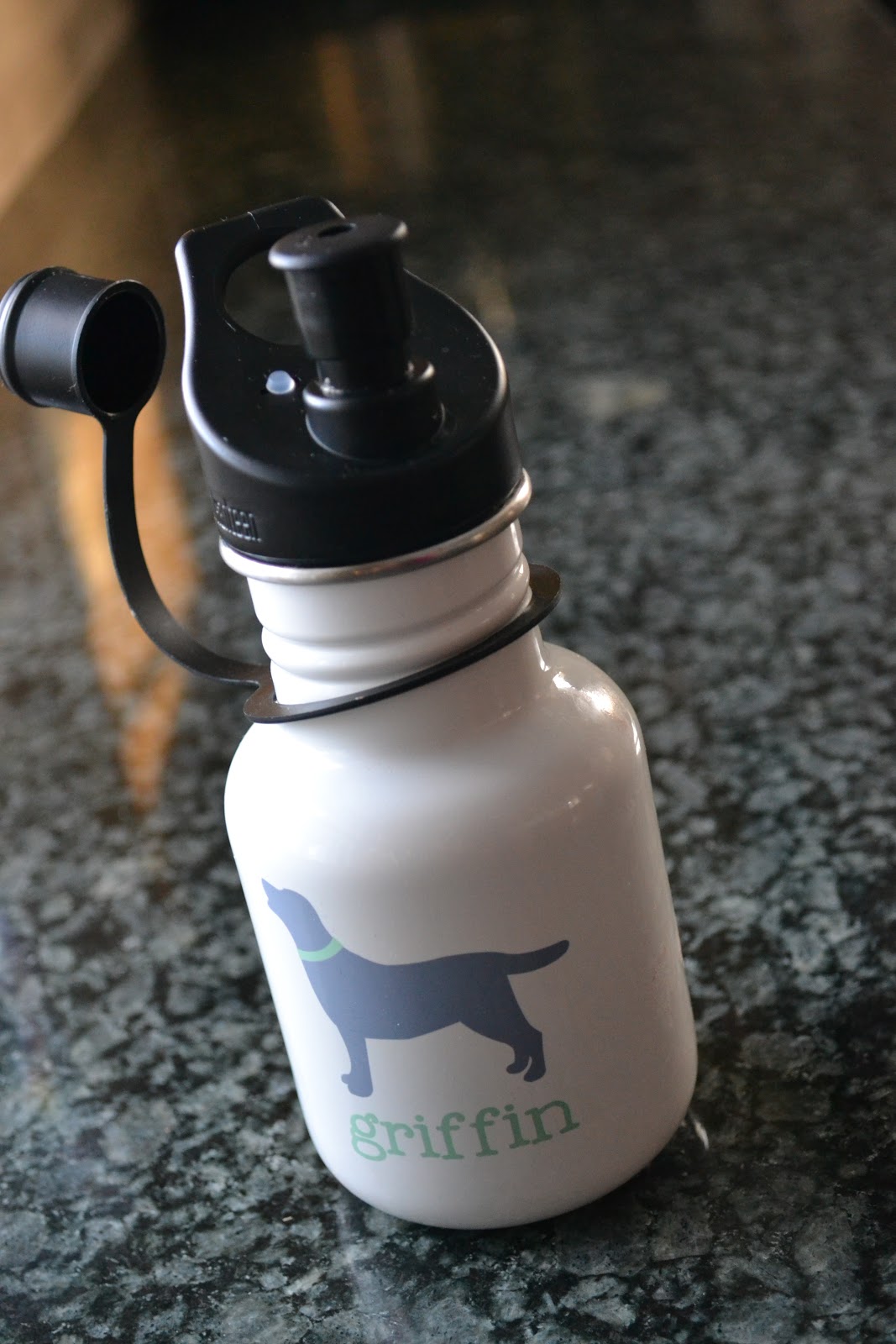 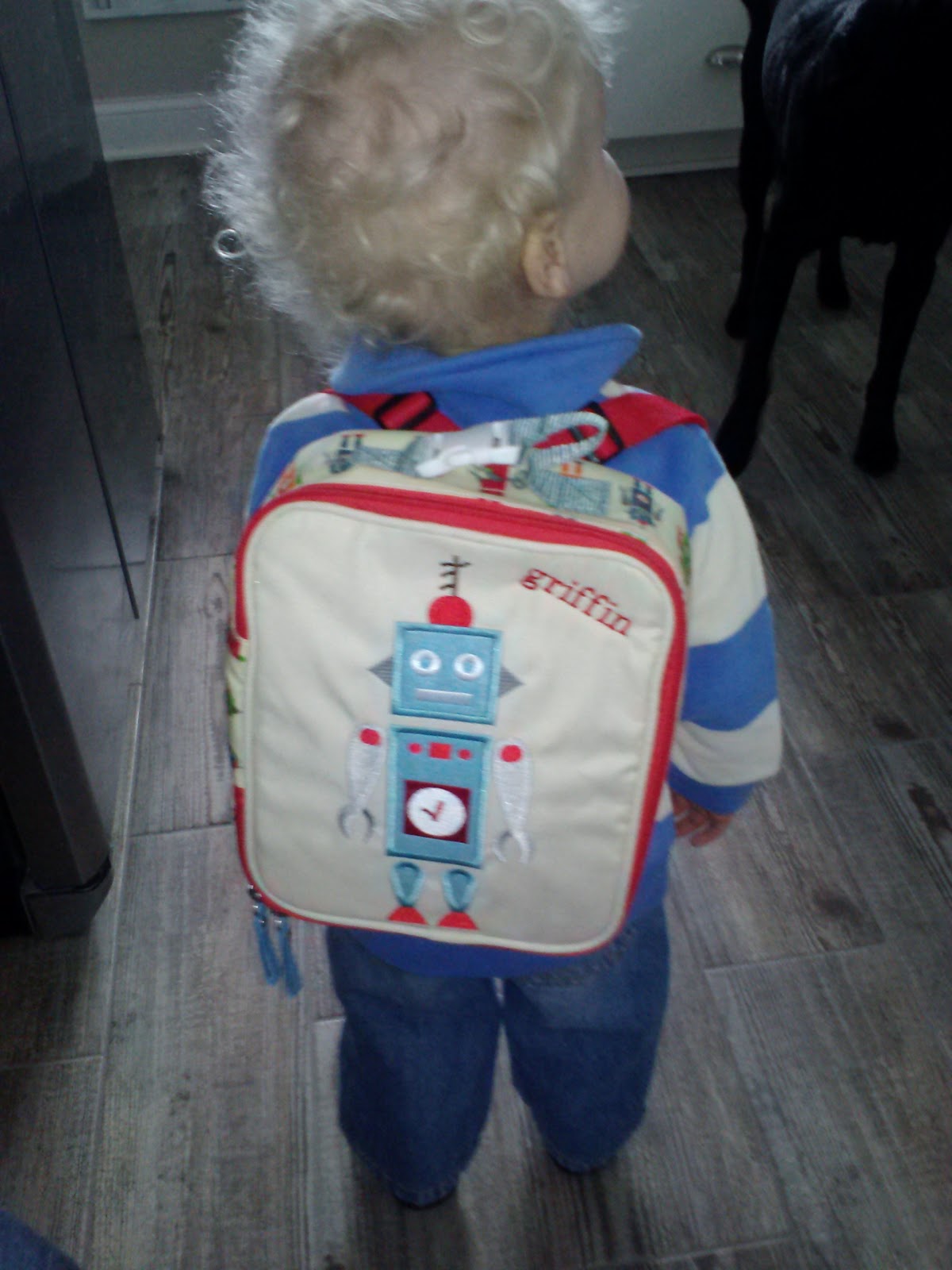 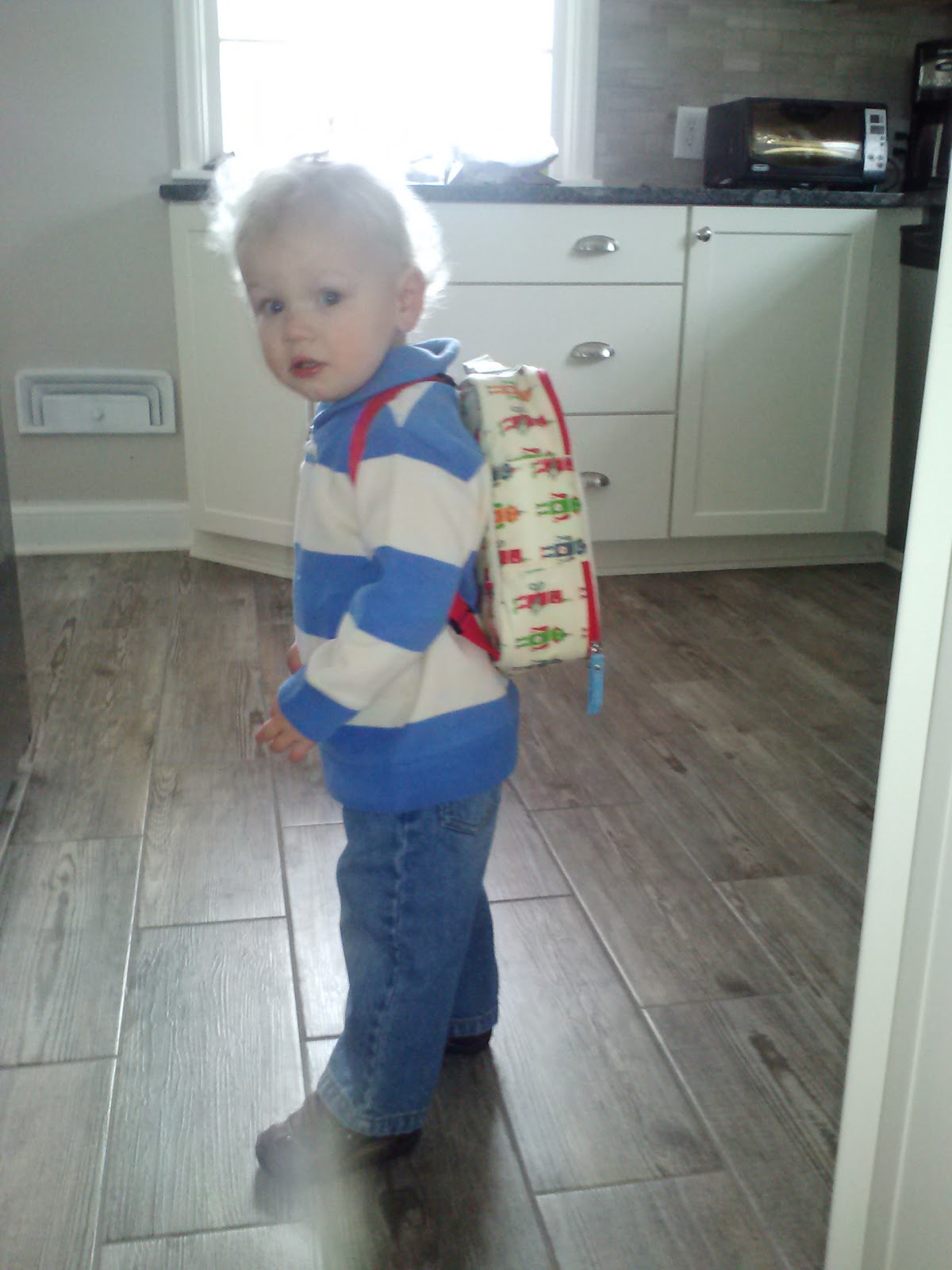 Most time-consuming for Griff-TIE: Duplos/Legos and Drill
Griffin calls his duplos, "Legos."  So I will refer to them as such.  This is Griffin's first real interest in imaginary play building things.  He'll actually build something with the wheels on the bottom and call it a dump truck.  I love seeing how his little mind works.  This will definitely be something we can add to over the years. 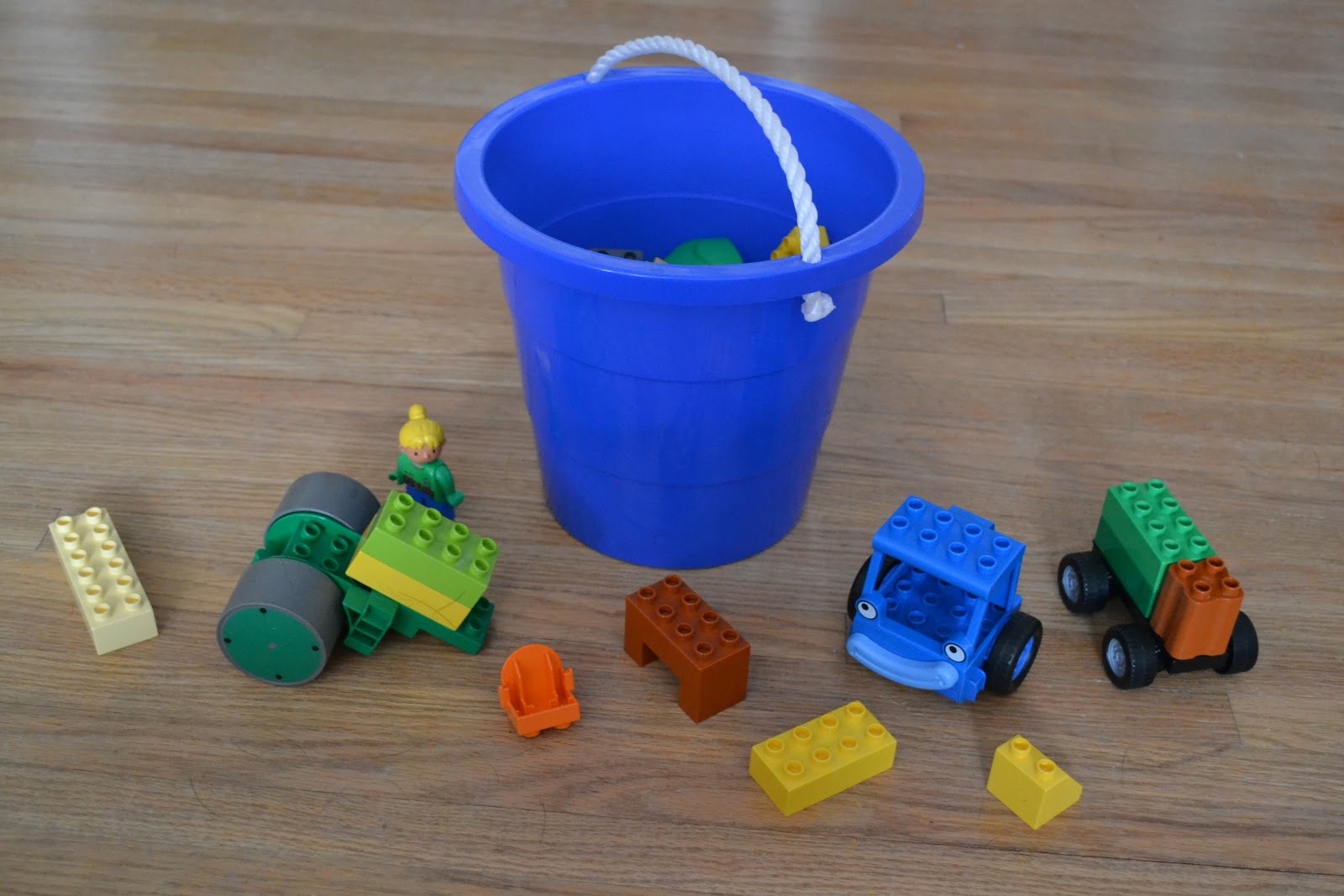 Griffin also got this drill that came with a car, an airplane and a motorcycle.  At first he was just using the drill to "fix things."  For example he would find a screw head on a table and point the drill at it and say, "Giffy fixin' table."  Now he actually tries to get the screws from the toy apart....and he can get a few, but putting them back together is another story! 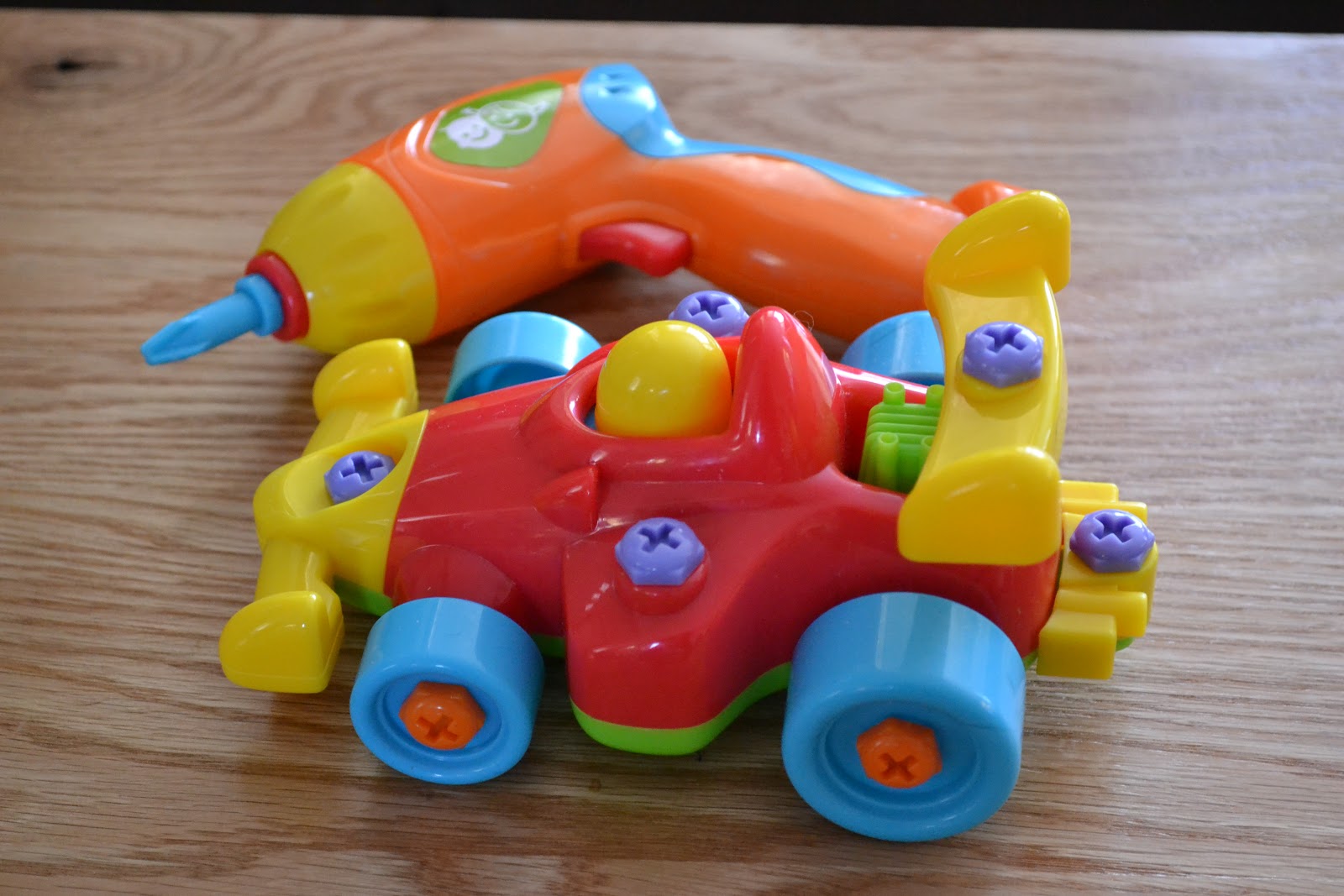 Most energizing: Espresso maker and milk frother
No, this one is not for Griffin:).  I got a "Nespresso" machine and milk frother so I can make my own specialty coffee drinks.  This cold month alone it has probably saved me hundreds on trips to Caribou:).  I love it!  It is such a special treat and makes me excited to have coffee and breakfast.  Plus I froth milk for everything...chai lattes, hot chocolate, and even just to put on the top of a regular coffee. 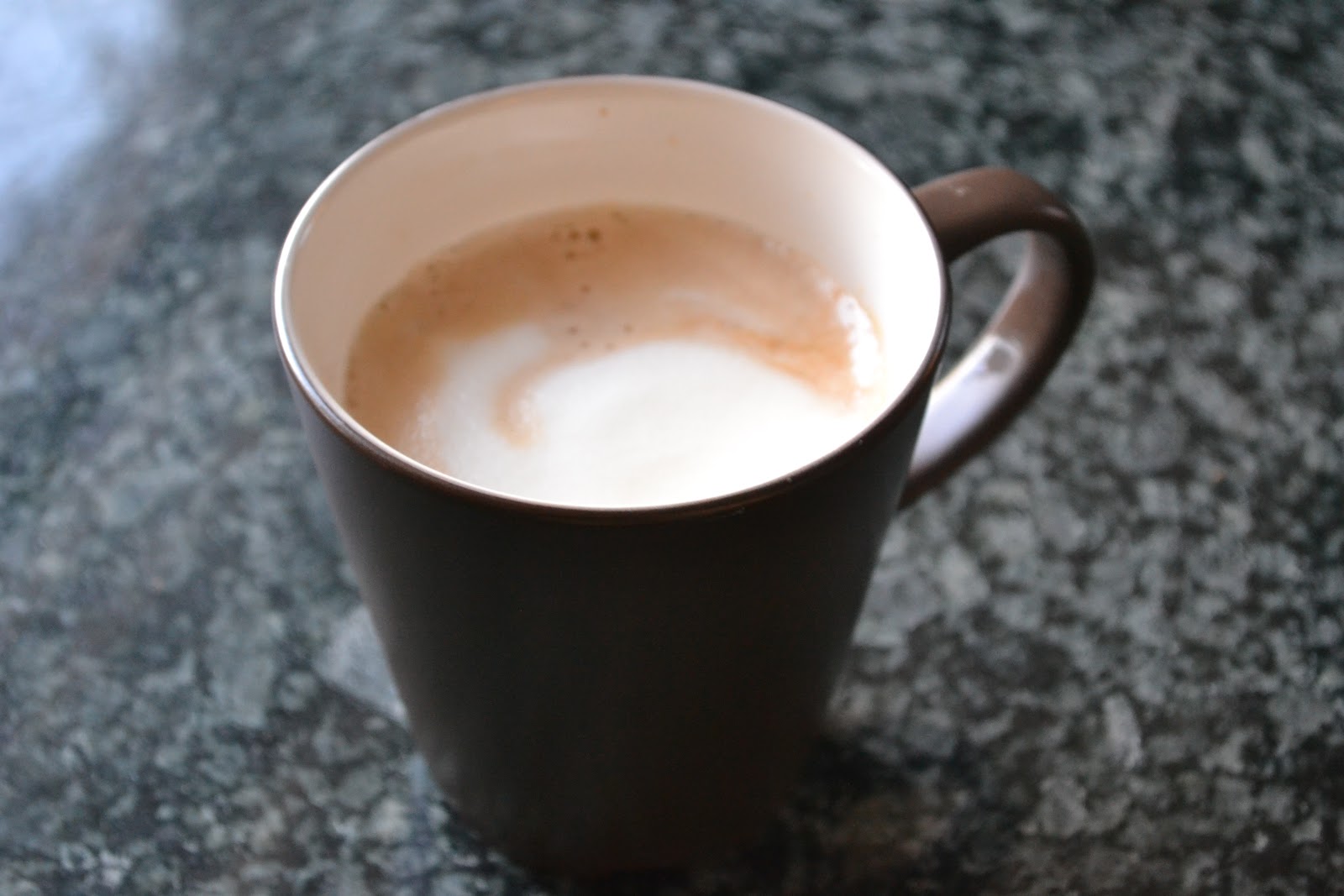 Most dangerous (but still kid-friendly): Food Cutting kit
When Griffin opened this one, Uncle Tom was helping him and he, in Uncle Tom's words, "Cut Uncle Tom's finger!"  Griffin started crying that he had hurt Uncle Tom and to this day when he pulls the set out he still talks about how he cut Uncle Tom's finger.  Griffin does have a lot of fun with pretend food.  My hope is to (with my dad's help) make something like this for his 2nd birthday. 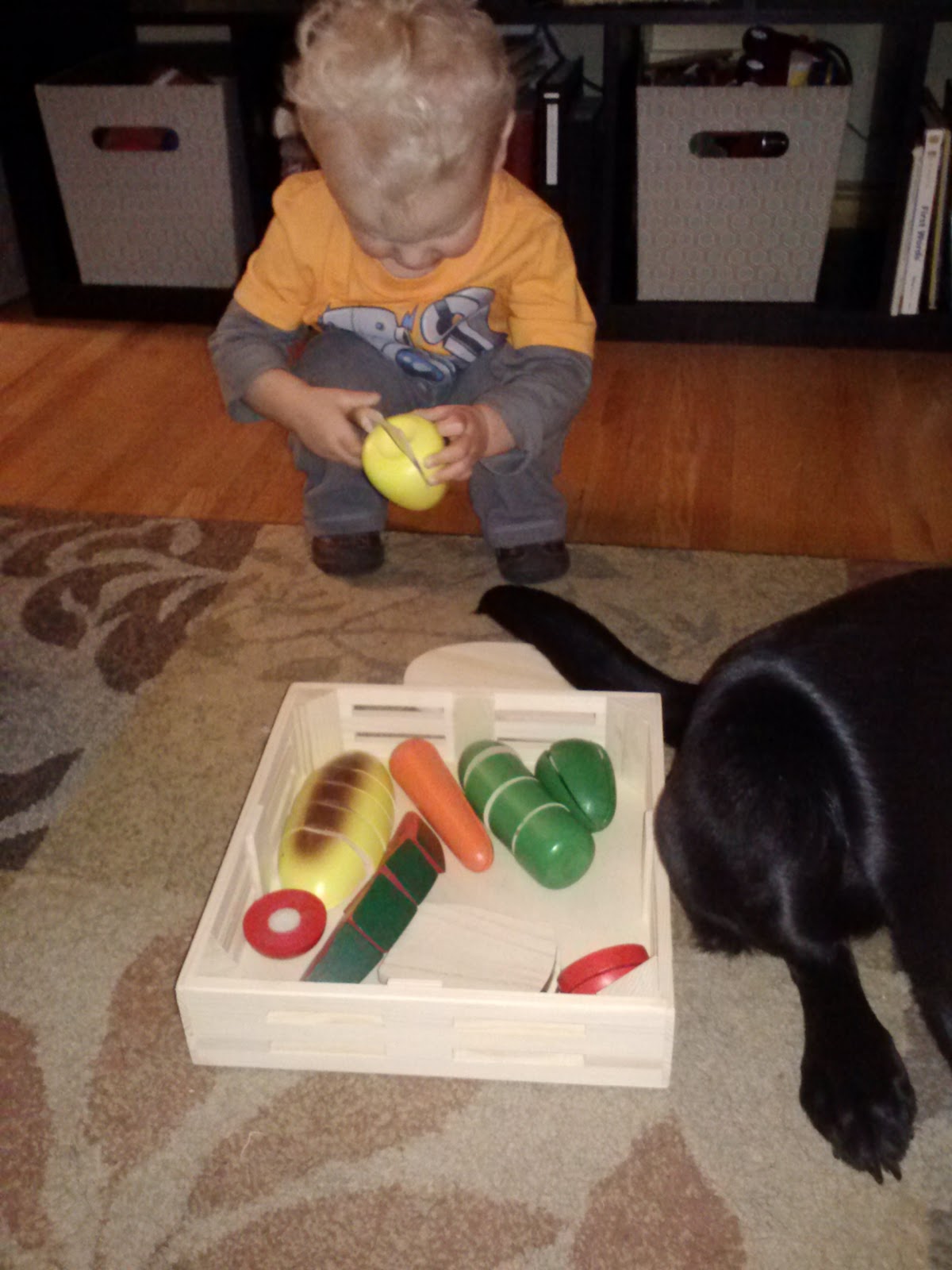 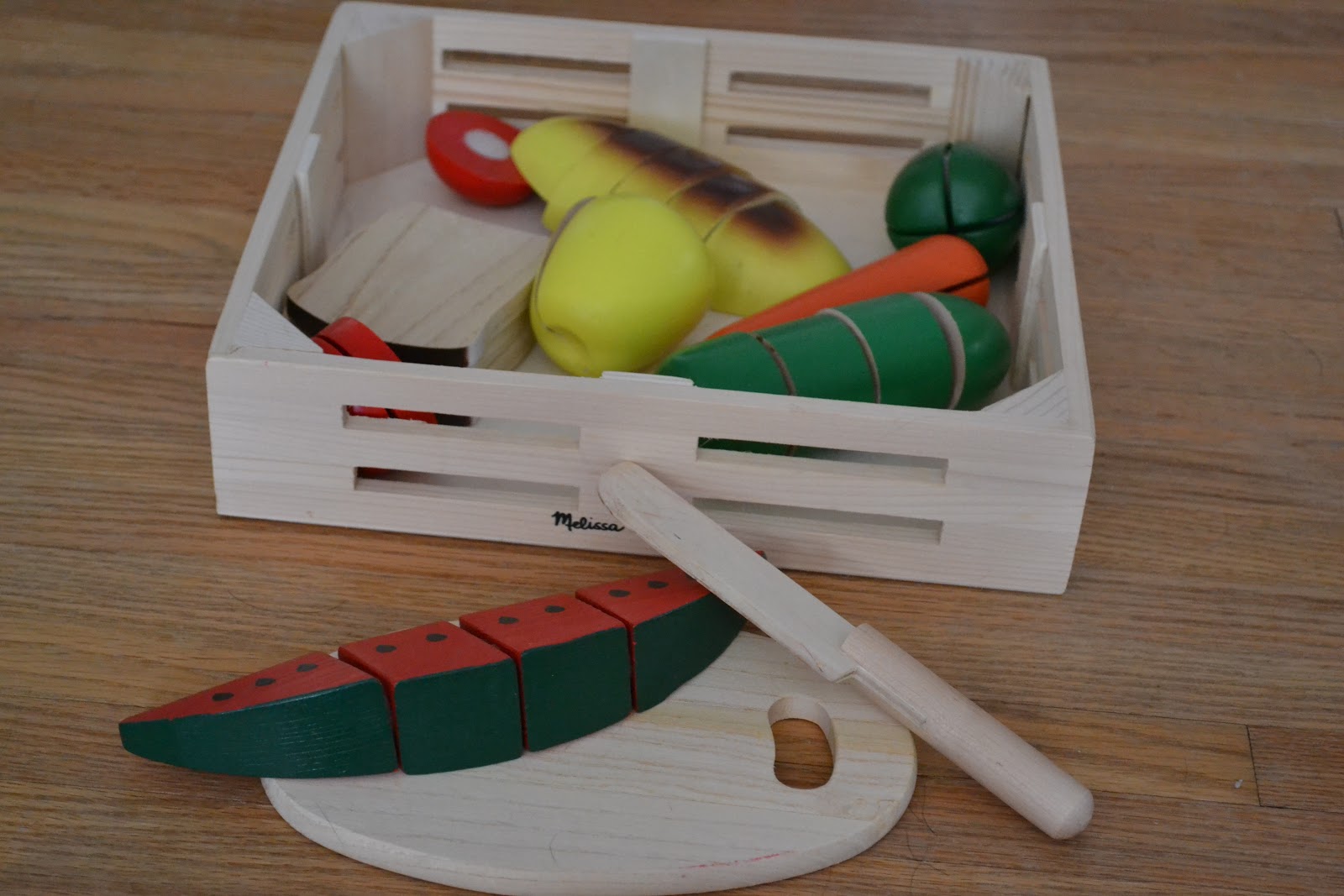 Most intellectual: I'm a Garbage Truck
In following one of my family's traditions, we gave Griffin a few books to open at bedtime on Christmas Eve.  One of them was, "I'm a Garbage Truck."  It's 4 pages of awesome-ness.  Meaning it is a super short read and not annoying at all!  Griffin has also learned the difference between garbage and recycling trucks.  When he requests, "one more story," I'm always quick to pull this one out because it's now one of my favorites! Warmest: Hat
How adorable is this hat!  And how amazing that he'll actually keep this one on his head (at least from the car inside or inside to the car). 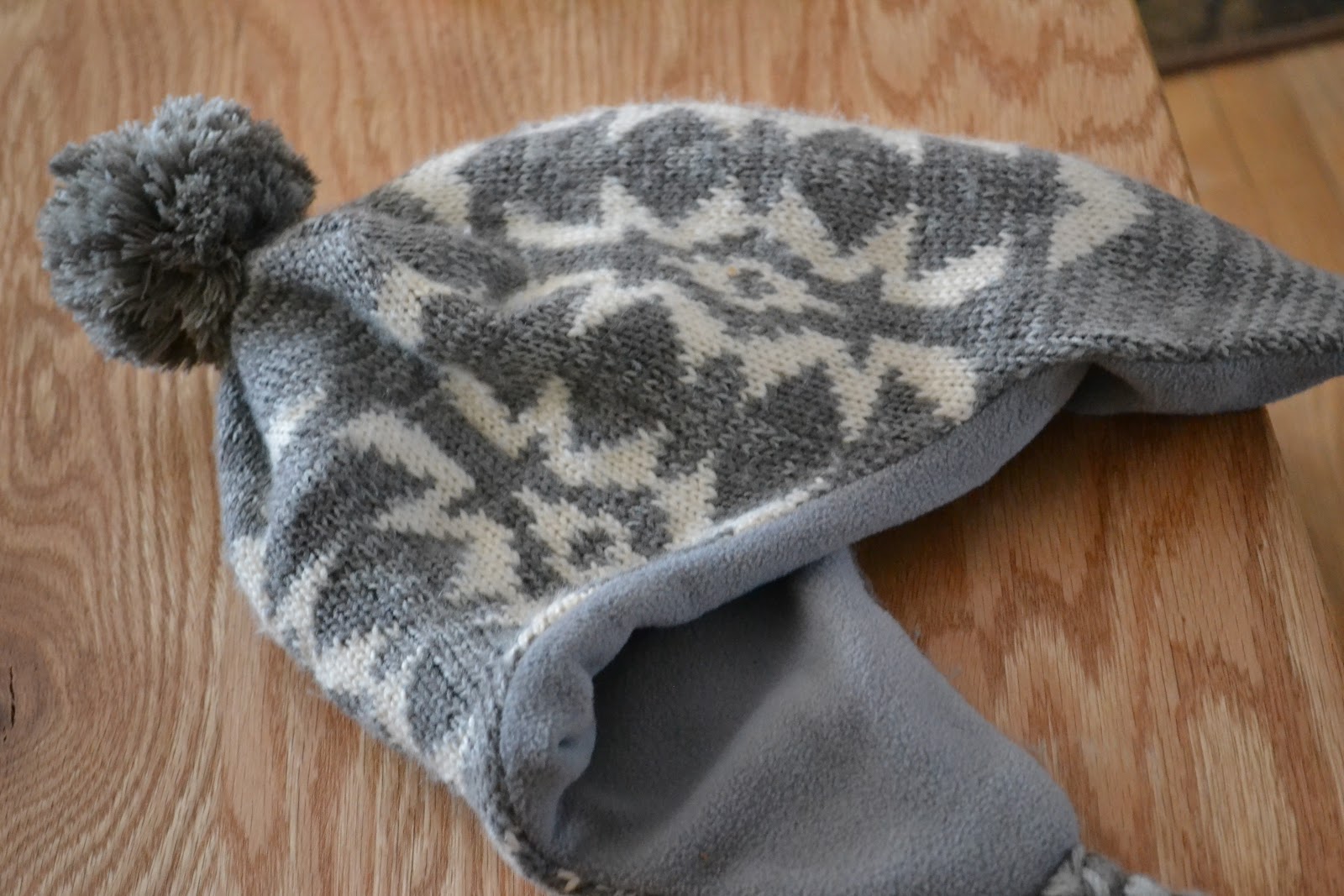 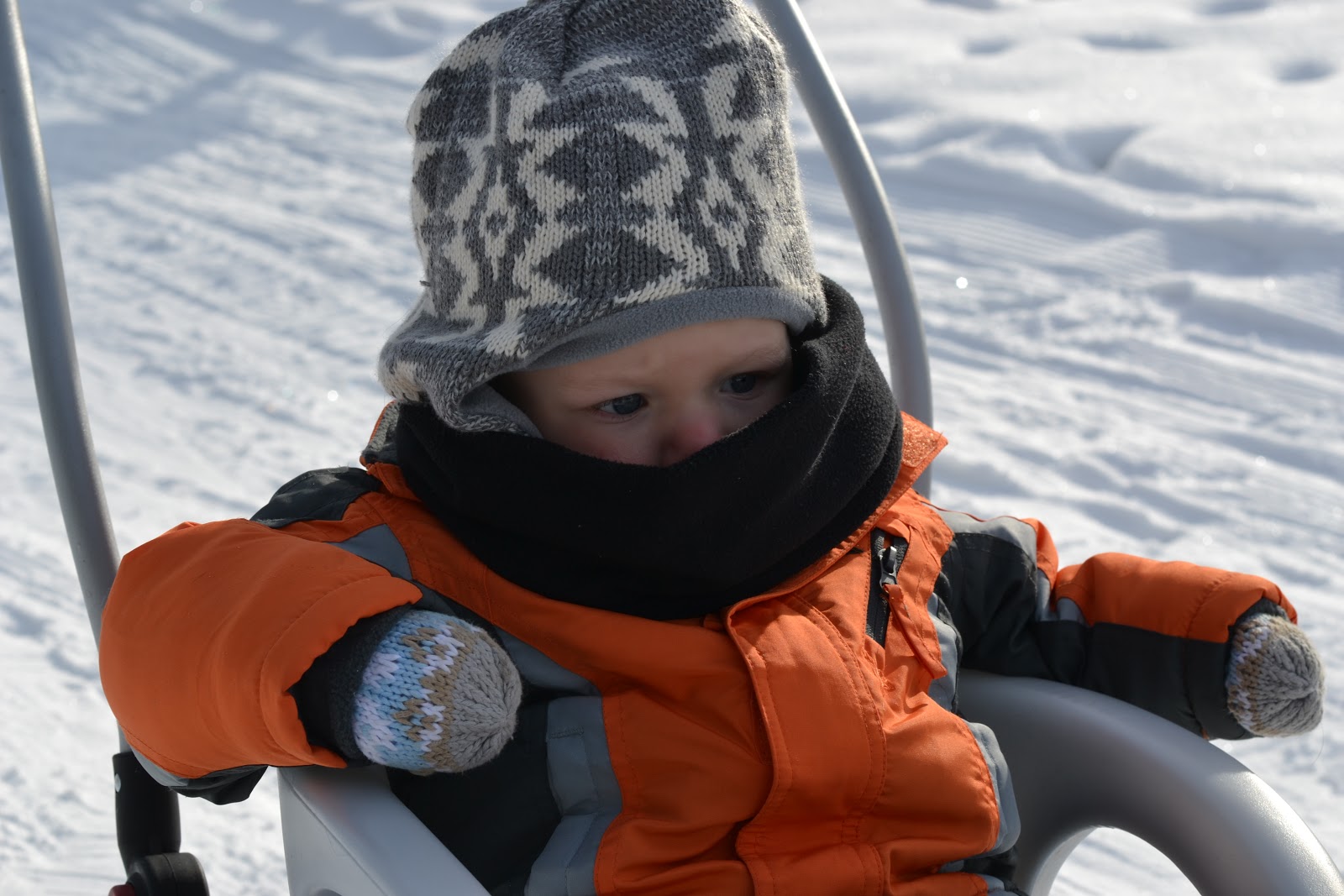 Girliest: TIE
A few new items for baby sister!  Can't wait to dress a girl in just a few weeks! 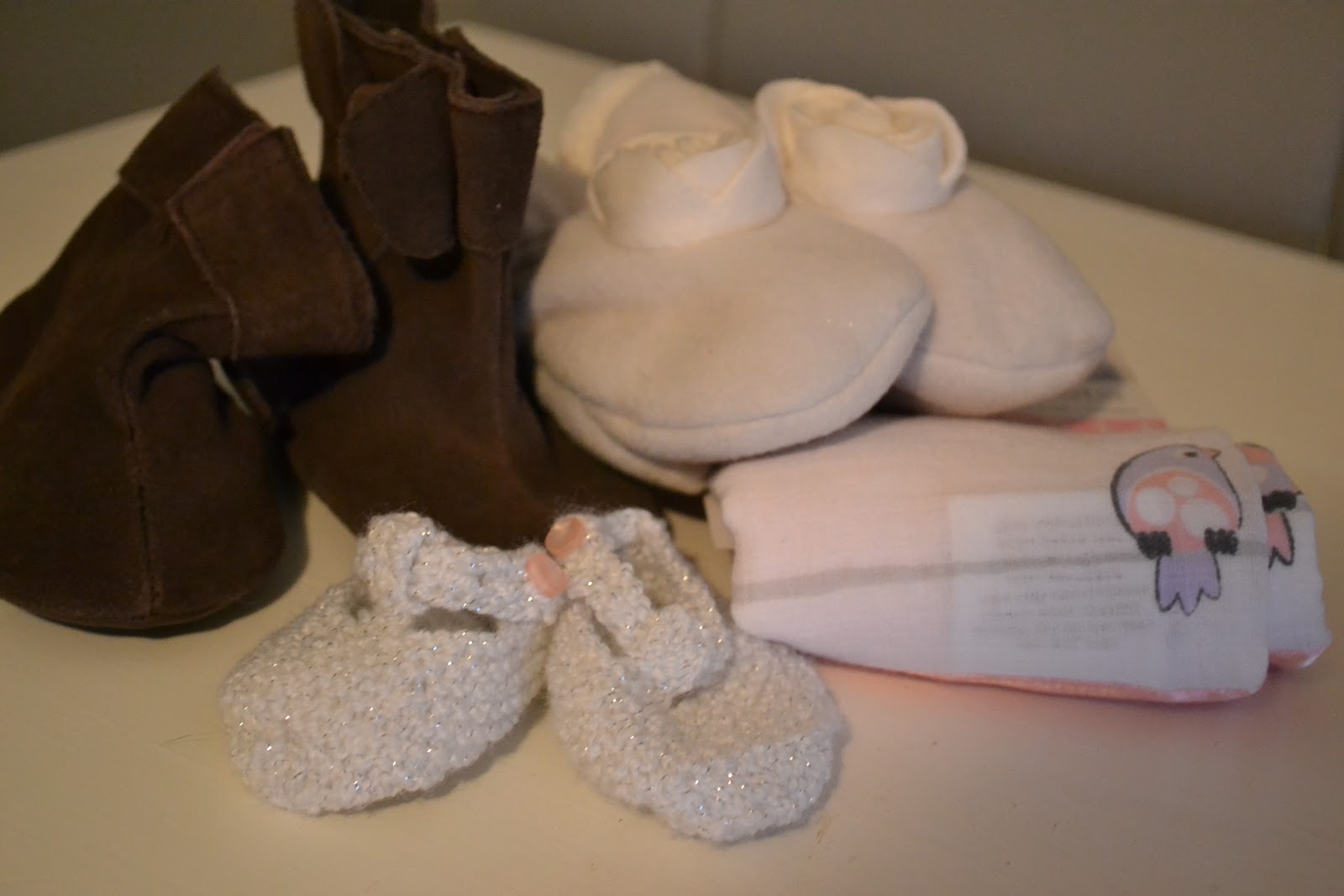 Most Home-Made: "Just My Cousin and Me: A story about Levi and Griffin"
This book is awesome.  Brings me to tears how thoughtful and precious it is.  Auntie Liss made a copy for each Griffin and Levi for Christmas and it chronicles their adventures together. 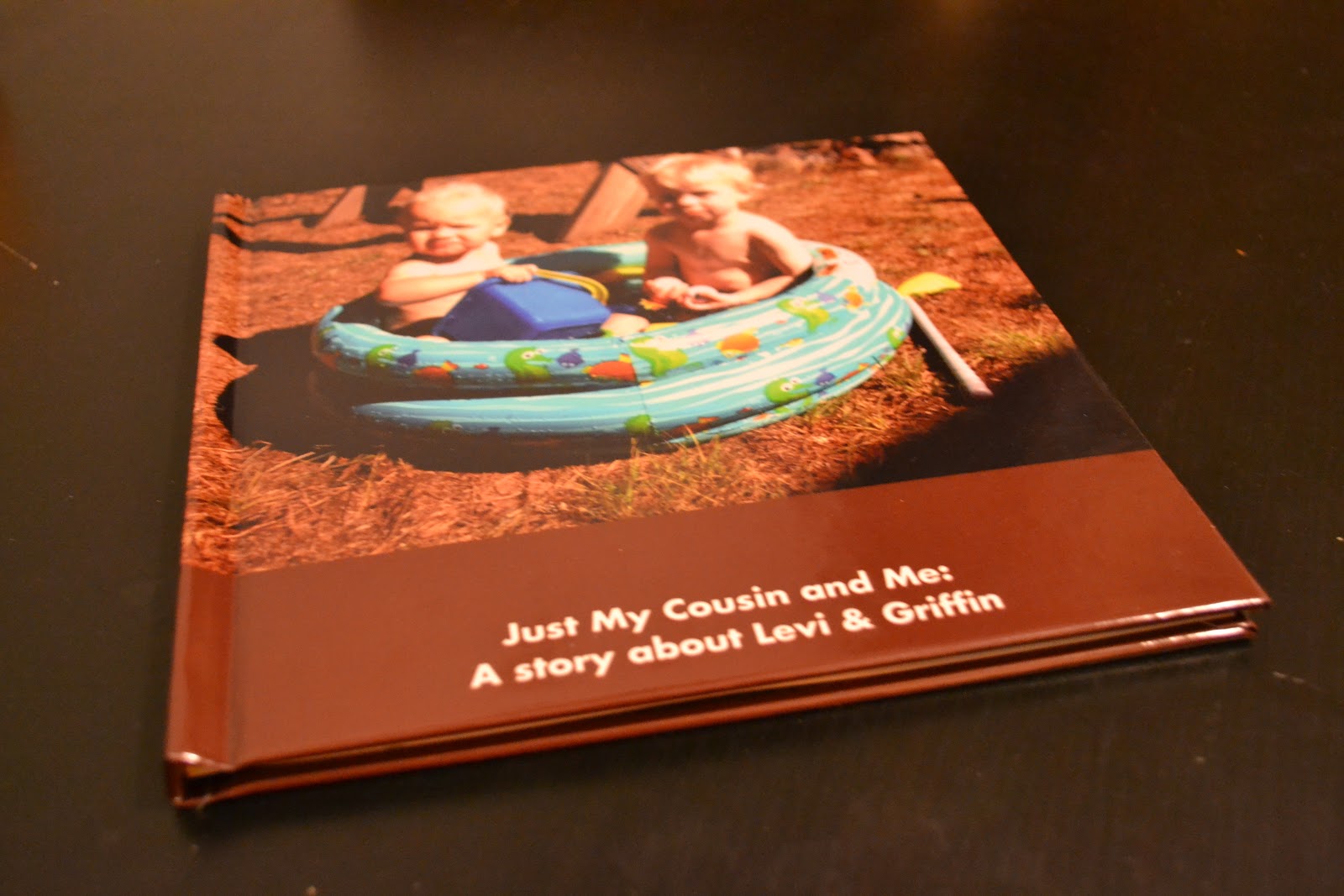 It's a regular in the favorites collection... 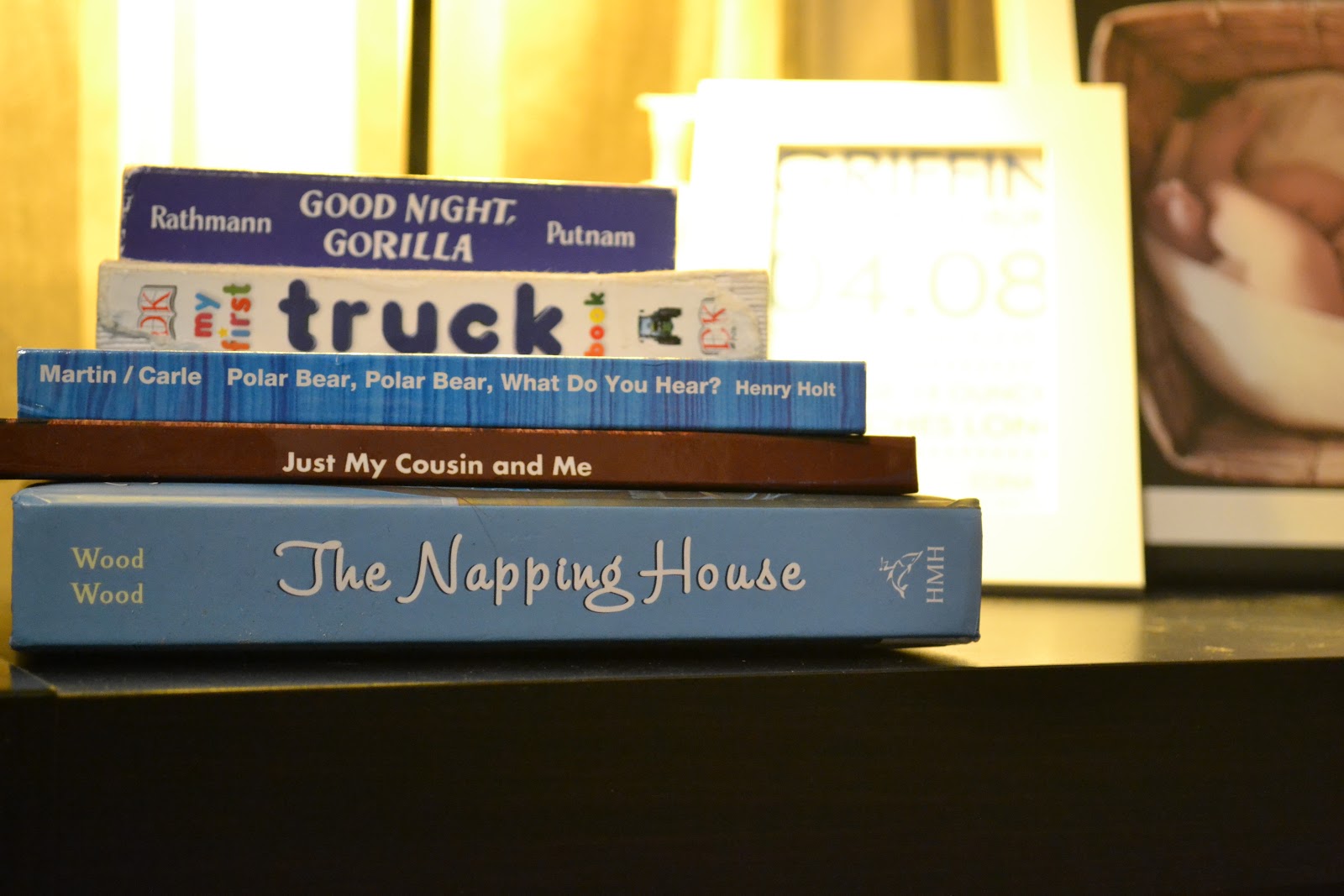 It starts out by bringing them back to their introduction when Griffin was just hours old. 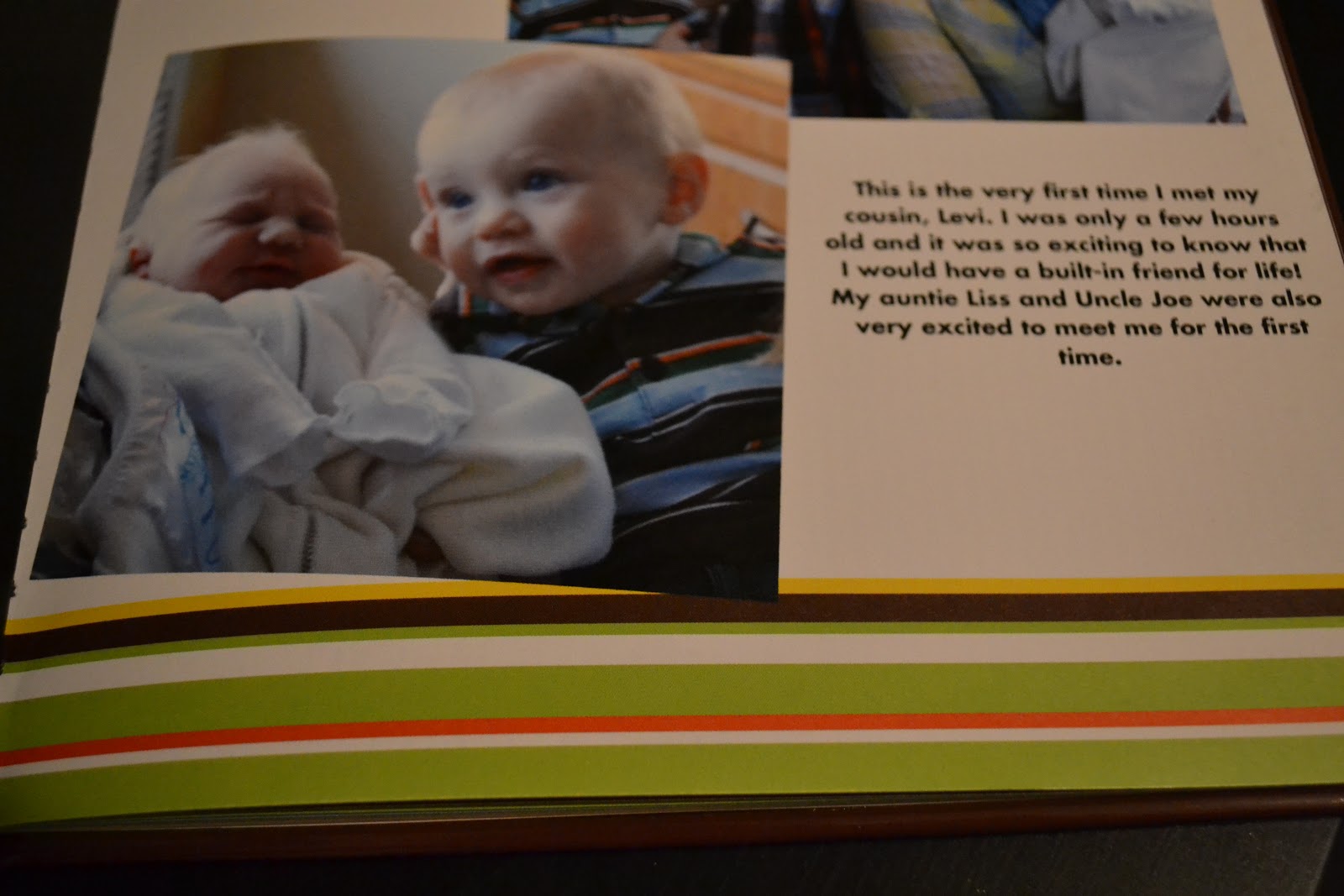 And goes through big and small memories of the two of them playing, laughing and even crying together (first pic with the complete "3 amigos!"...Wesley too!) 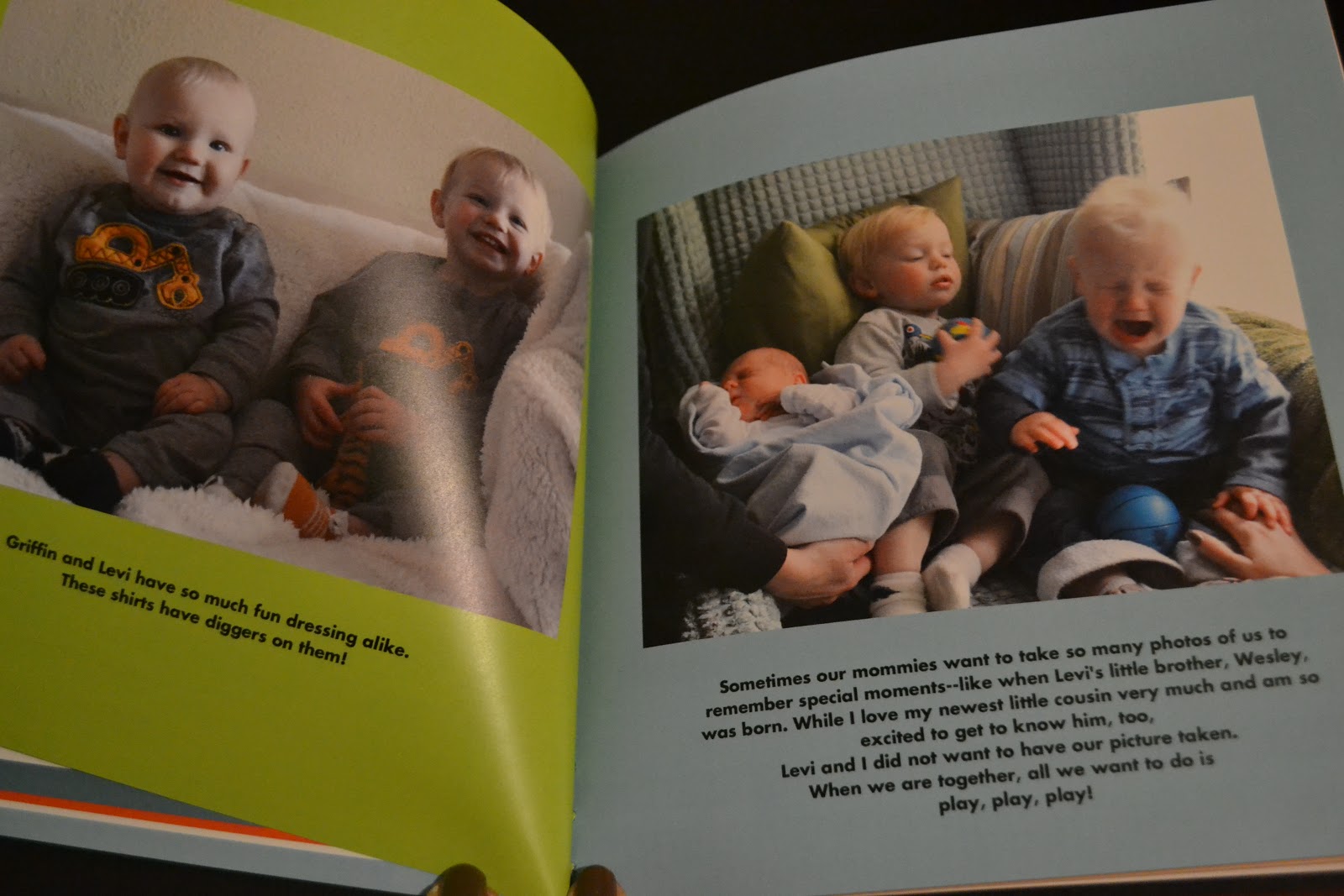 And ends with them saying "Night-night!" on their first sleepover at Auntie Liss and Uncle Joe's. 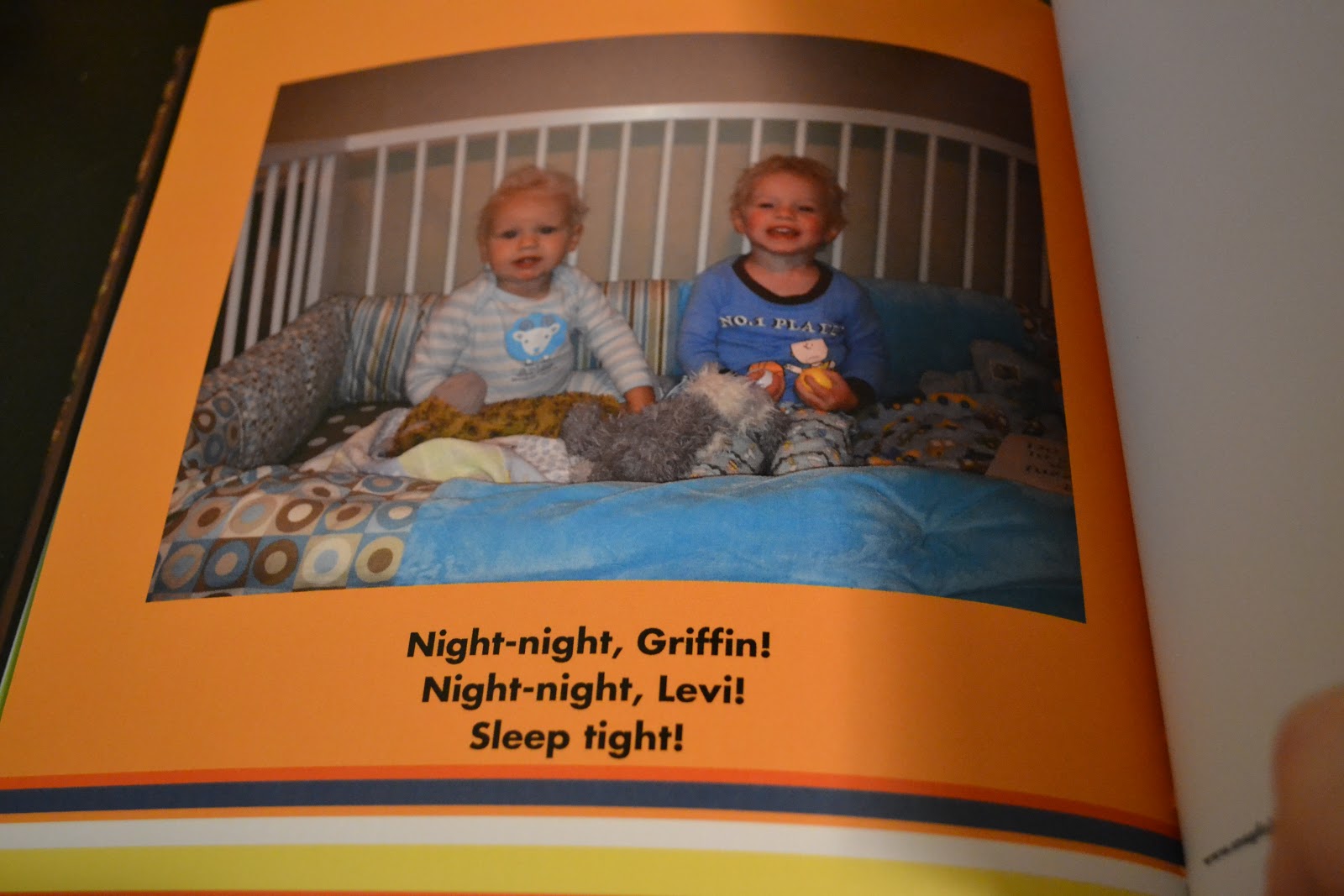 It is an amazingly special book, and Griffin loves it....because of how much he adores Levi:).

Most Hand-Made: Truck
Yes, I said it....handmade.  My dad, Pa, made this truck for Griffin.  It is the coolest truck I've ever seen.  The different shades of wood and intricate details make it adorable, while the sturdiness make it completely play-able for a toddler.  Pa's woodworking skills keep surprising me....first the cradle, then the toy box and now this!  He also made a digger that's over at his house for Griff to play with. 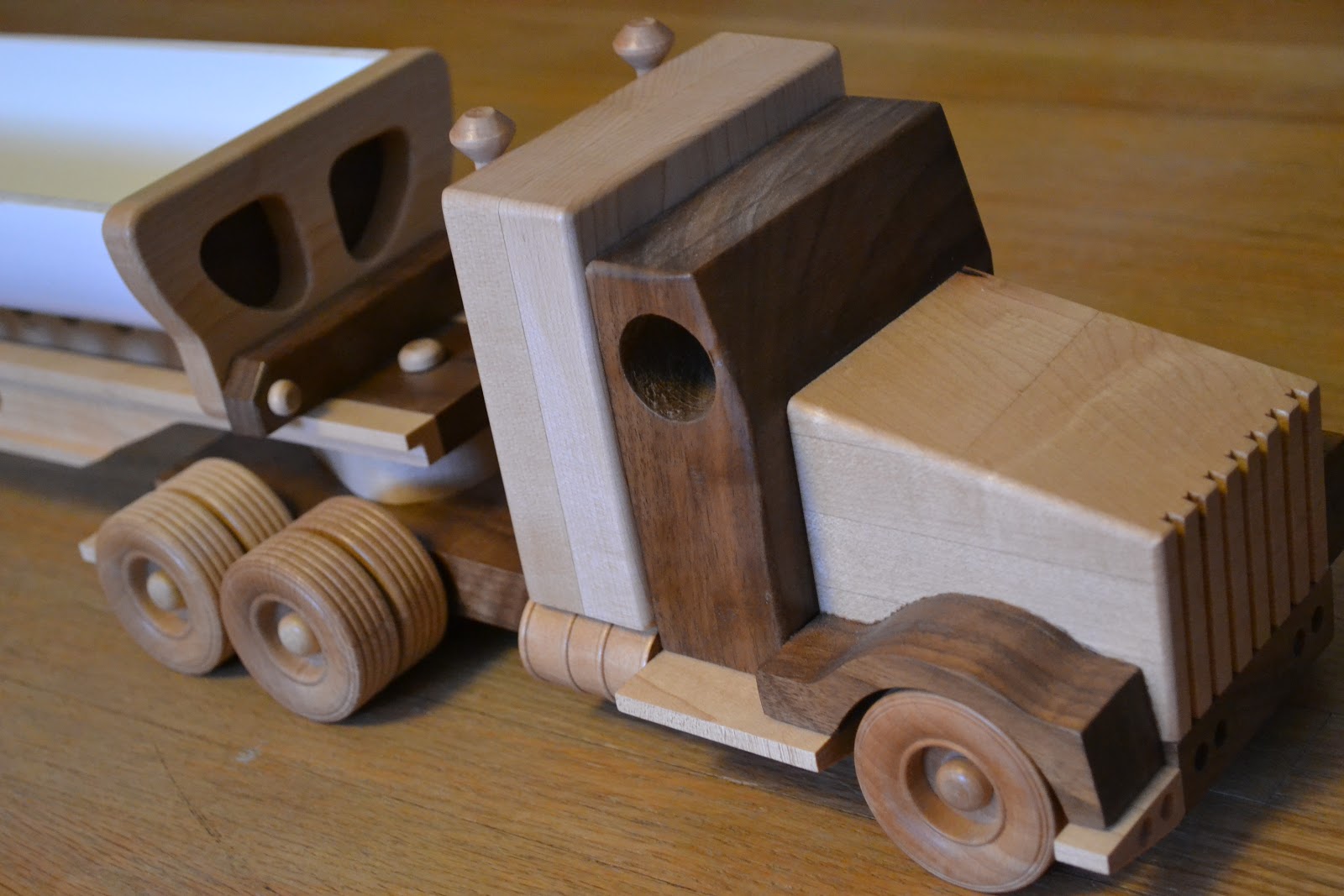 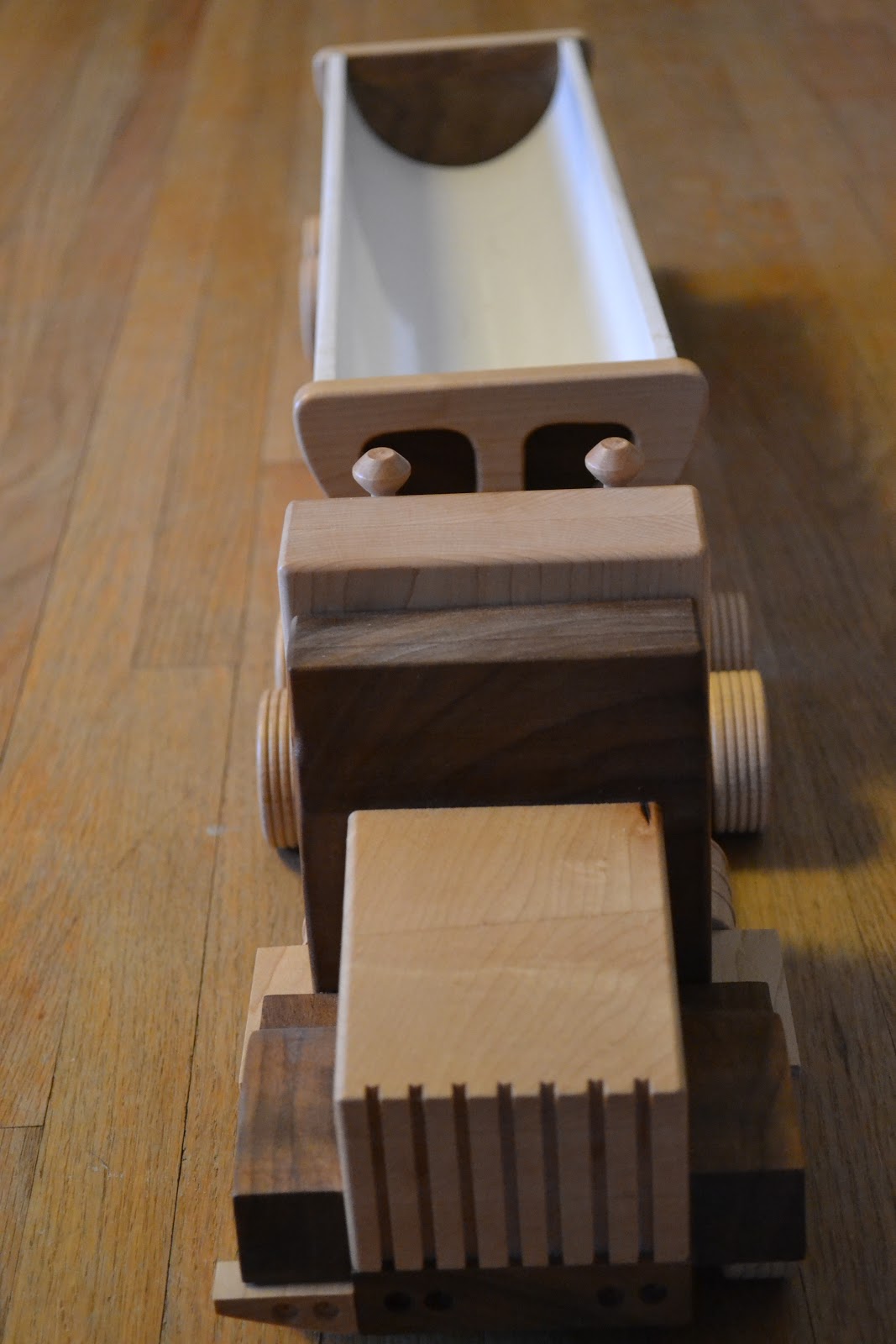 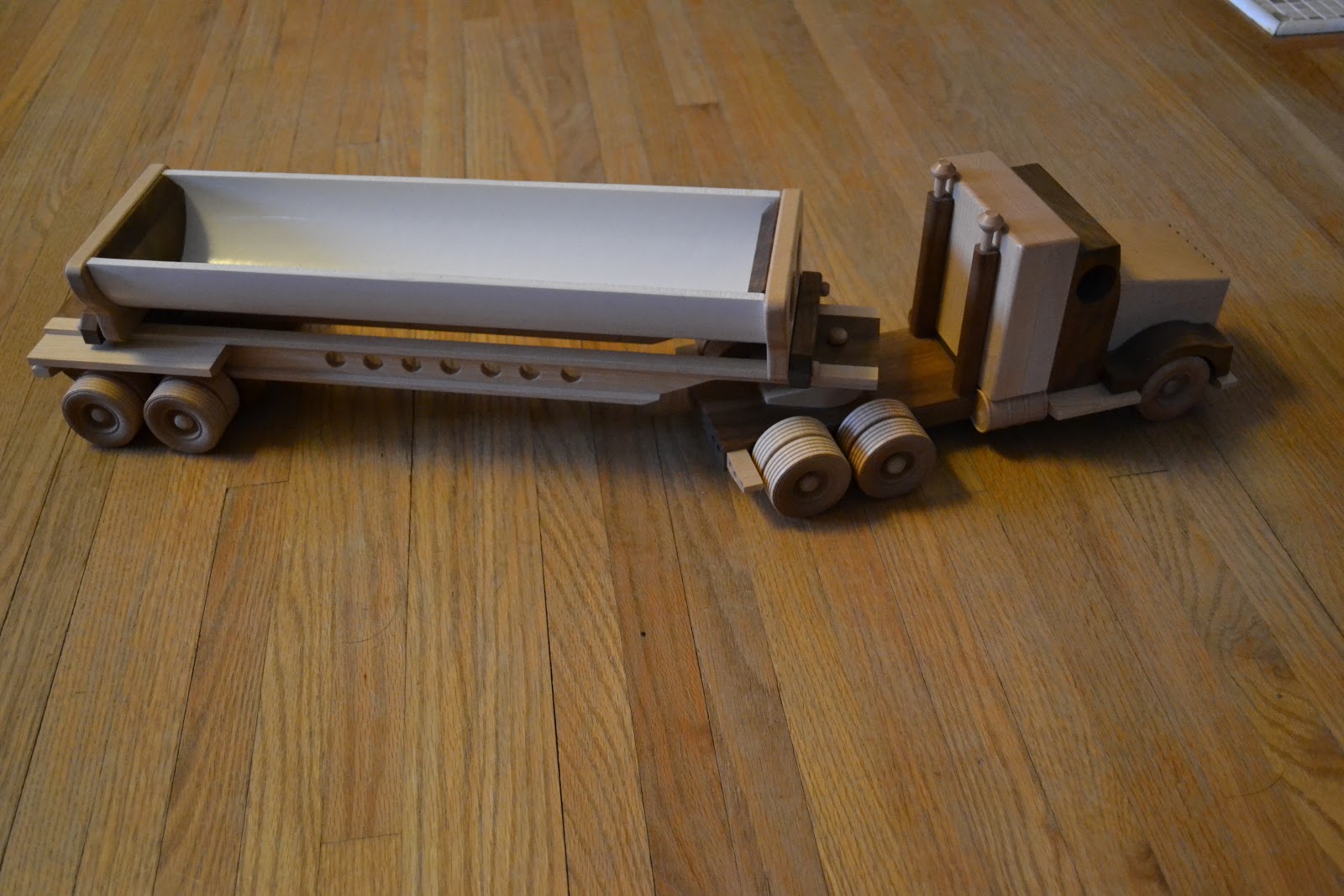 I keep encouraging him to try to sell them, but he says with the amount of hours it takes to make something like this, no price would be worth it.  That just proves what a labor of love it is...that he would spend so much time to make something for Griffin to enjoy....and boy does he sure enjoy it.﻿ 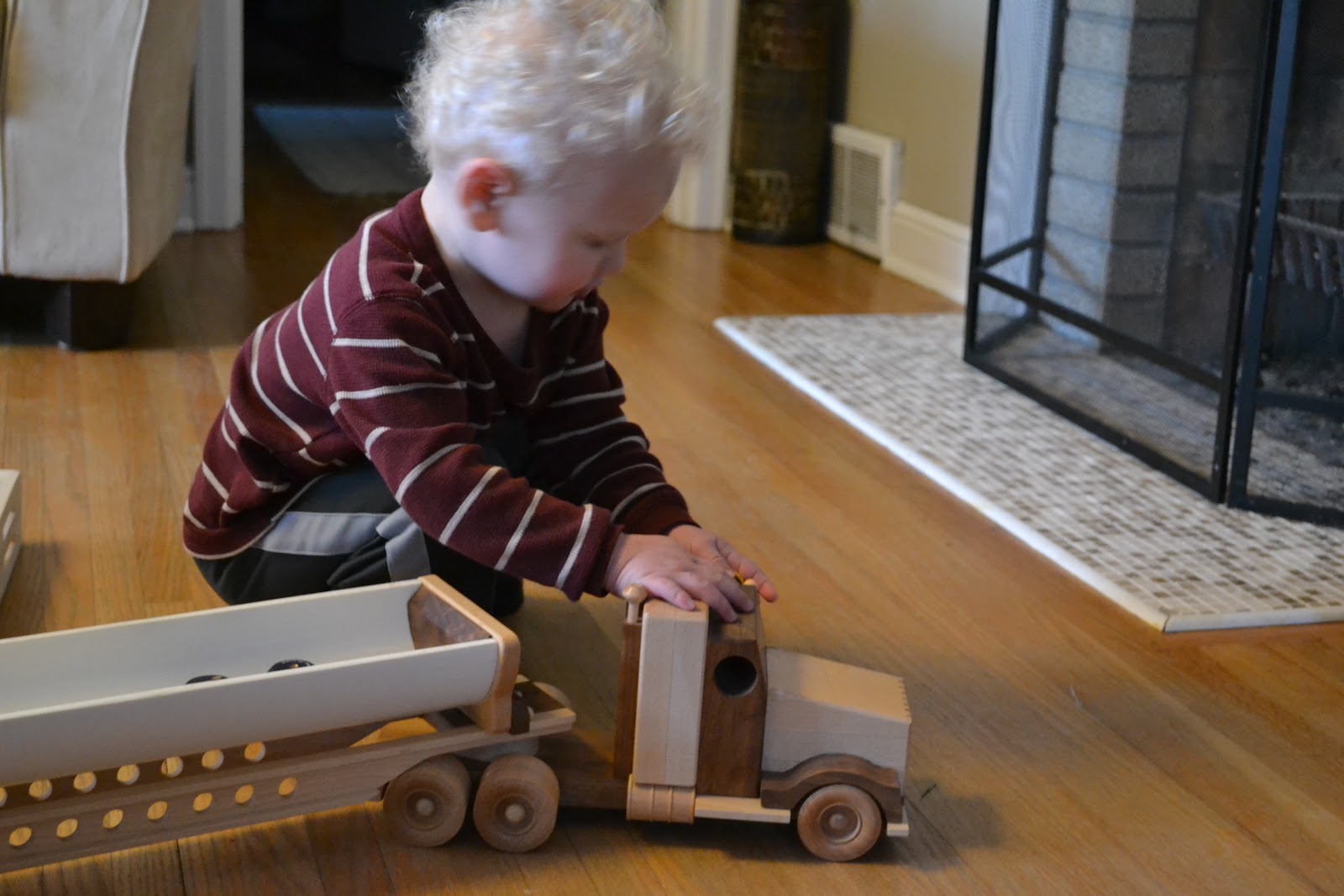 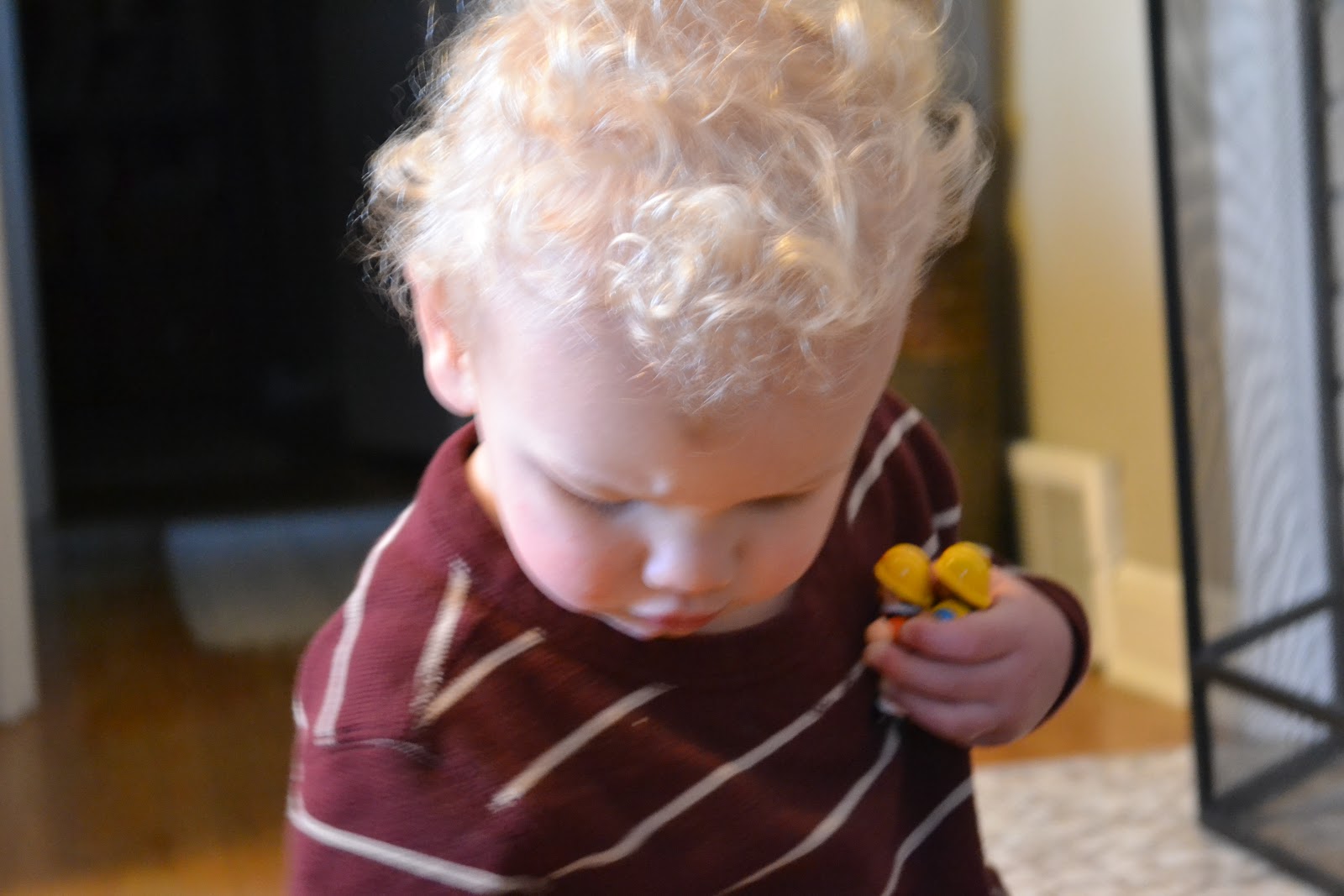