We're getting there....writing about October 31st in December is not too bad:).  This year for Halloween, Griffin was a Tuff Guy.  And a Fire Fighter. 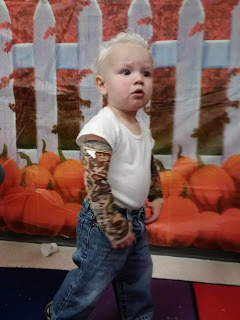 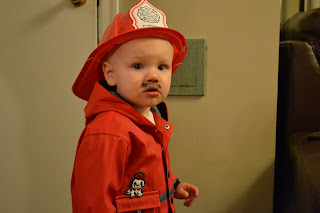 In Minnesota, due to the possibilities of weather for the holiday, you kind of have to have options.  For example, it could be the biggest blizzard of all time (circa 1991) or it could be like both last year and this year and be 50 degrees.  Too bad Griffin is probably wasting all of his mild weathered-Halloweens as such a youngster. 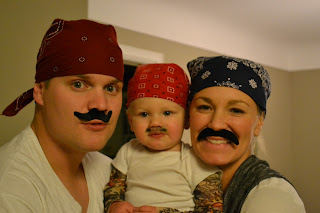 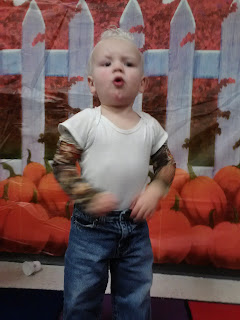 Last year's Halloween was for show.  No trick or treating...but this year, we actually hit up about 5 houses.  Griffin even learned to say, "Trick or Treat!"  The bad thing about only going to your 5 closest neighbors is that they all know you and invite you in.  Had we gone to someone's house we didn't know, Griffin would have been none-the-wiser and probably would have walked right in and made himself at home. 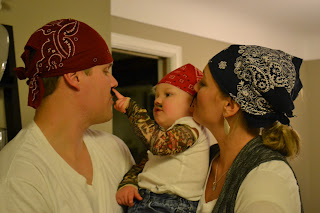 Griffin's favorite part of his costume was his mustache.  If you ask him what he was for Halloween, he'll tell you, "mustache." And we all got into the spirit.  Unfortunately you can't tell from the pics, but Nate and I are also wearing tattoo sleeves, in case you ever need to borrow them....we've got 'em.

Meme even got to stop over for a quick tuff guy pic. 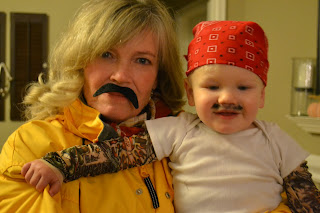 Here are the tough guys after treking through the neighborhood sorting and counting their loot.  Griffin got to eat one tootsie pop (aka "sucker ball") and he loved it.  I think he still loves fruit more, but he knows that dada will cave and give him a sucker during Viking Football Sundays. 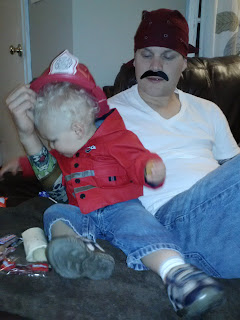 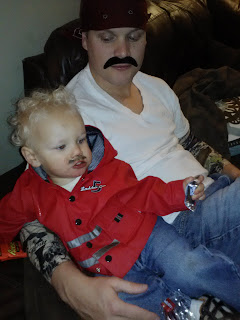