I'm still going with the excuse that since my kitchen reno has fallen severly behind, so has the chronicling of our life.  Today we're heading back to early October.  Nate, Griff and I headed to the Twin Cities Corn Maze in Brooklyn Park.  Before we even got through admittance, Griffin was weaving in and out of the corn which lined the parking lot.  Bonus points to you if you can find him in this picture before Nate gets to him:). 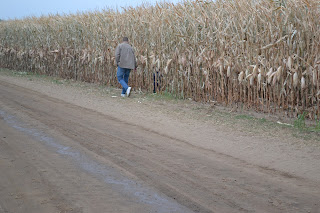 There he is!  My how he's grown since last year at the pumpkin patch.... 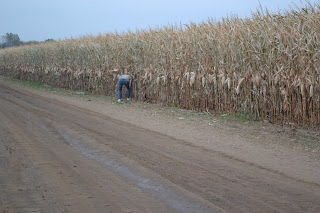 And he required a tackle just to stop the momentum and remind him that we were actually going somewhere fun, if we could only get through the main gates. 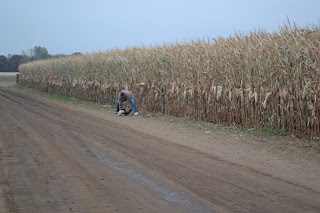 We finally got him headed in the right direction..... 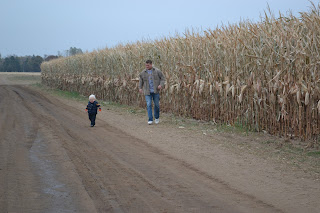 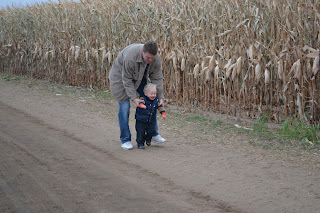 And we were smart to snap a few pics before entering... 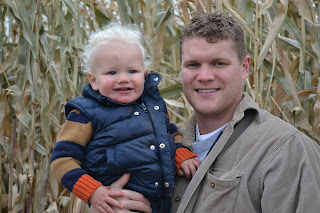 ...because, getting them "on the way out," is never a good plan. 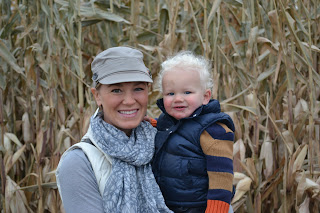 We also got to meet up with some friends from (Nate's) college, Chad, Laura and Owen.  Isn't he the cutest little thing!  He was such a good sport, enjoying the corn maze even in the cold temps. 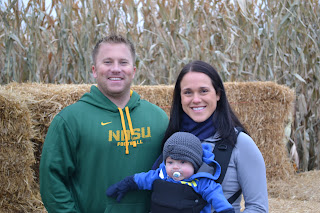 There was a little kiddie maze in the middle that was tall enough to keep Griffin contained, but short enough that we could keep an eye on him. 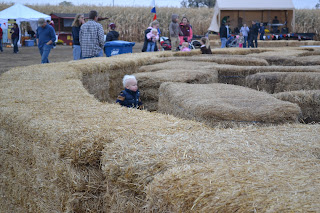 We just had to keep an eye out for the little curly toe head making his way throughout the maze! 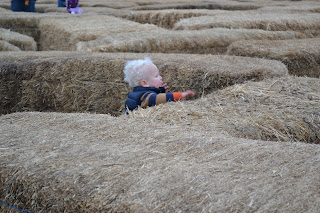 There was also a petting zoo....with goats, chickens, sheep and a little cow. 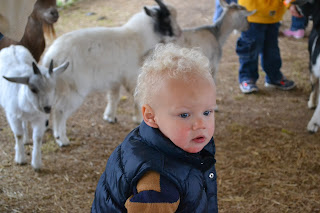 Upon entering we talked about how we need to be gentle and approach the animals slowly so we didn't scare them.  To be honest, I thought Griffin would be afraid of them and it wouldn't be an issue.  Shows you how well I know my son. :) 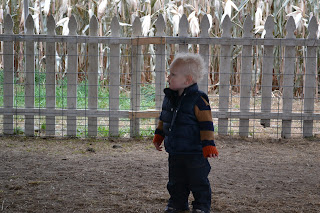 True to Griffin form, he was chasing the animals, trying to pull their tails and torment them any way he could. 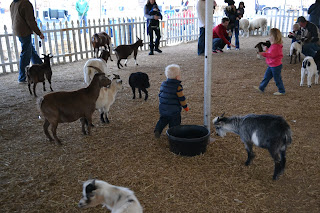 You can tell by the look on his face, he's just planning his next move, scoping out his next tail-pulling victim. 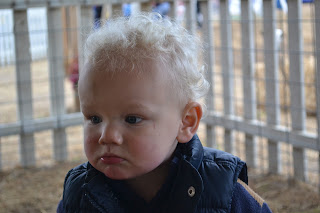 Our next stop was the corn pit.  This thing is genious for an 18-month who can't run fast or far enough in a given day to keep up with his energy level. It took so much energy just to walk around he actully got frustrated and sat down (for a few minutes).... 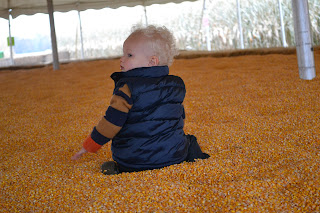 ....until he figured out he could throw corn... 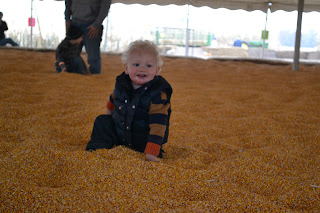 All in all it was a great day at the corn maze.  We burned a lot of energy, had a few meltdowns, and got to pick out our pumpkins, which the squirrels later ate on our front step, and Griffin likes to remind us, "Qurrrrls ate our pumpkins!  Hey Qurrrllss!  Stop eating our pumpkins!" 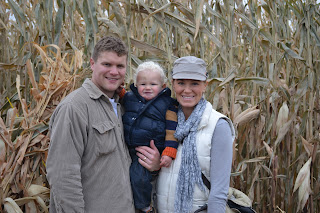