The season for crop tops?

Well for those of you who wonder about DIY project fails, this is one of them.

I got a bunch of 18-24 month long sleeve onesies at a garage sale awhile back, since that's pretty much all Griffin wore last winter.  However, onesies are a little out of Griff's style right now, actually they are just an extra hassle.  Everytime you have to change a dipe.  So, I decided I would turn them into long sleeve t-shirts.  I would just crop off the snap area and hem it, right?  Wrong. 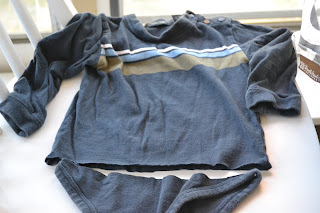 The cropping was easy, the hemming, not so much.  T-shirt material is hard to work with in general.  It was hard to iron to make the necessary pleats to stich a hem, it was hard to sew, it was just not worth wasting a Griffy nap on.  I quit after 4.  I got two that will work for grungy around the house type shirts and two that went straight to the ever accumulating mass of stuff that will someday become my own garage sale. 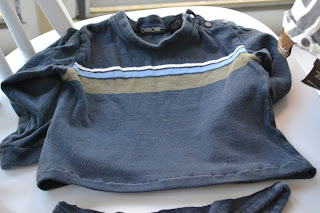 Even though it was a fail, it wasn't a big investment.  I think all of the shirts were less than $1 each, so at most it was a $4 project for two shirts.  And the other reason it's not a fail is that Griffin looks pretty darn cute in pretty much anything, and I have to think he'll even look cute in a hand made crop top:).
Posted by Lesley at Wednesday, October 10, 2012