Griffin is getting really vocal.  He always has been pretty verbal, his first word was car at around 8 months.  By one he had probably around 10 words and now he has even more.  They obviously are not all clear as day (umbrella is "uh-brella") but he knows what he is trying to say, and he gets better everyday. 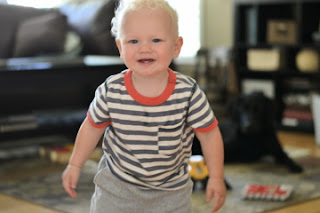 His new thing is phrases.  Especially phrases that begin with dada.  "Dada mowing." "Dada hat." "Dada golfball." He does now say that the golf ball that I give him to hold in the car is "mama golfball."

He also loves to point to things and say whose they are.  For example, to the remote, bar of soap and mower, he points and says, "dada remo, dada sooo, dada mower."  To the water dish, tennis balls and bag of dog treats he says, "Coopah" which is Cooper.  And to the ipad, refrigerator, bookshelves and other decorative things around the house, he says, "mama."  I think we started using these types of phrases instead of "don't touch that," and they seemed to have stuck.  Hopefully it will be this easy to teach him to share and leave someone else's stuff alone (wishful I know:). 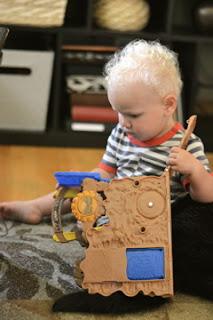 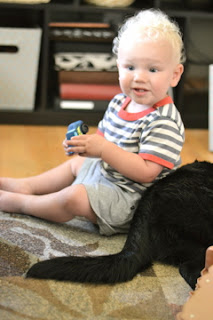 He just started adding Cooper's name to some phrases too.  Before we leave the house he reminds me, "Coopah teeet," so I don't forget to give Cooper a treat.  He also tells Coop, "Coopah, shhh," when Cooper barks randomly at a passerby or the possibility of Nate's car pulling into the driveway. 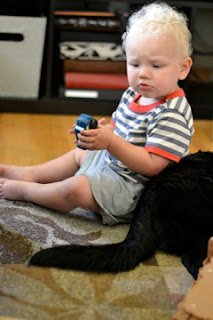 He does have a few new random words and phrases, "gorilla," "Louie, no bite," "big dump truck," and, "Peeewww," and let me just say, they are pretty hilarious coming out of a 16 month old:).  My favorite new phrase is "I love you."  He says it mostly in response to my saying it first, but it sure melts your heart.
Posted by Lesley at Friday, September 21, 2012