I don't know if two years in a row makes us annual fair-go-ers, but we did it again!  We made the trip to the Minnesota State Fair!  Last year, Griffin was really too little to appreciate anything about the fair, though he did love the people watching!

This year we had a few more things we wanted to get done (besides eat sweet corn ice cream with maple bacon drizzle...mmmmm!)

First off was the big slide.  Griffin loves slides so we thought this would be a hit!

Here are Nate and Griff walking up the big staircase to the top. 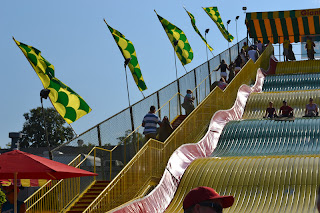 And here they are coming down! 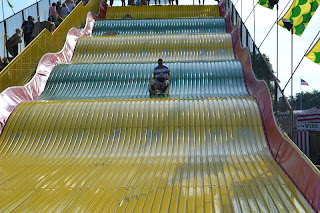 I couldn't really tell until they got to the bottom that Griffin did NOT like the big slide....I guess it can be pretty scary for a 17 month old.  It was hard not to laugh though.... 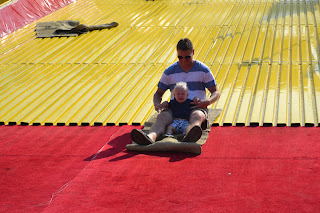 We did most of the normal fair activities, we walked through a lot of areas like the Midway and Machinery Hill, eating fair food along the way. 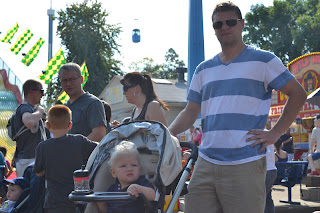 The was a cute little kid farm area that Griff was just a little too young to really appreciate.  But he had fun with it anyway.

First they gave him a little bucket to fill up with corn to feed the (fake) animals. 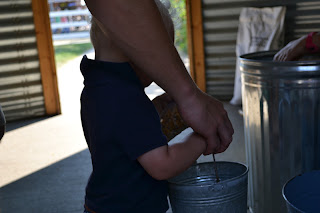 Griffin wanted to eat the corn himself. 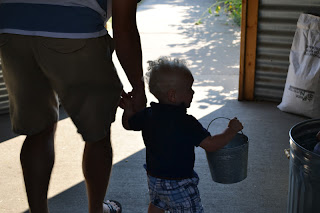 Then they got to ride little kid tractors. 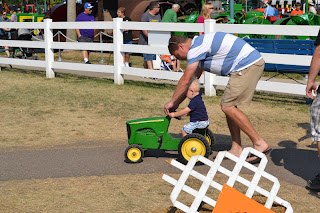 I think this was his favorite part. 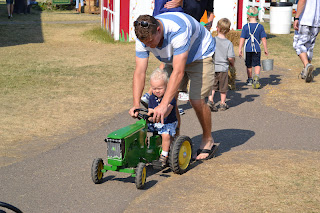 He screamed when it was time to move on to the next station. 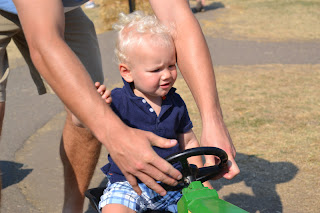 Then they got to plant seeds and dig up fake veggies.  Again, he wanted to eat the seeds and veggies.  He even took a mouthful of dirt.  It was lovely....and he fit right in. 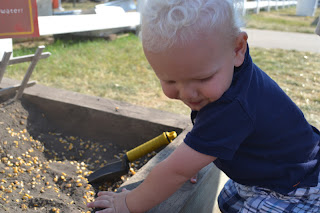 We were only there a few hours, but it was all we needed to experience Griffin's second Minnesota State Fair!
Posted by Lesley at Wednesday, September 19, 2012