I read somewhere that one of the ways to train your kids to stay away from certain things is to let the novelty wear off.  Griffin is was obsessed with Cooper's water dish.  We tried "no," we tried putting a bowl of water outside for Griffin to play with, but eventually we just had to keep putting Cooper's water up whenever Griffin was around so he wouldn't splash in it, dump toys and shoes in it, or drink from it.

The other day, I forgot to put the water dish up.  I was in the bathroom and heard Griffin's not-so-light feet scamper into the kitchen.  At that moment I realized I had not put the water up and I panicked.  I yelled, "Griffin, No! Don't touch Cooper's water!"


All I heard was a blood-curdling scream come from Griffin and I ran toward the kitchen.  Griffin was sitting in a pool of water the size of our kitchen, soaking wet.  Since the camera was on the table, I had to snap a quick few shots as I comforted him. 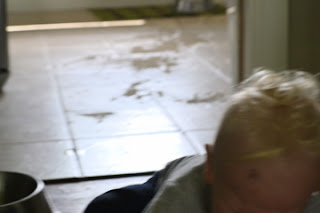 He had picked up the entire water dish, dumped it down himself and all over the floor.  I don't know if it was the water or the sound of the metal dish crashing on the ground, but it scared him.  And don't think I'm a terrible mother for saying this, but it was also a tad funny. 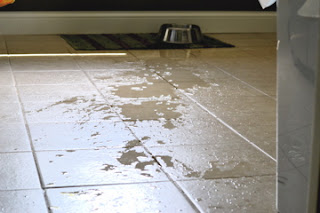 After some love and hugs from mama, we cleaned up the mess, and we haven't had to put Cooper's water dish up since. 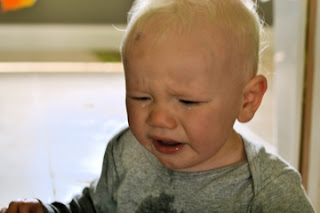 There really is no use crying over spilled water, a lesson Griffin learned that day, but he sure scared himself straight in the water department.  Now he points at Cooper's water dish and says, "PFFF."  Which is his way of saying, "Cooper's."  I just say "Yes, that's Cooper's water. Not for Griffin," and he keeps moving on to the next distraction.

Time will tell if this learning experience translates to other situations like water dishes at other houses, but for now, I'm tooting my own horn at my ability to teach my son not to touch Cooper's water:).