Griffin's love affair with golf began on the day of his birth.  We were in the hospital the weekend of the Master's 2011.  I couldn't tell you a thing about that tournament even though we had it on most of the weekend...I guess I had other things on my mind.

This year, we turned the Master's on and Griffin was enthralled.  Here he is watching Tiger....saying, "ball, ball, ball."


For his birthday he got his first set of golf clubs and wiffle golf balls.  He loves them.  He knows they are golf balls, but calls them "ball balls."  His new favorite game is to hit them around the yard.  In this pic he's got out his driver, but we spend plenty of time on his short game as well. 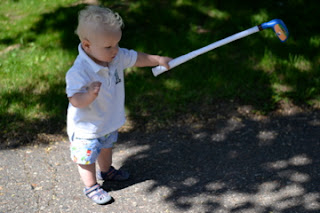 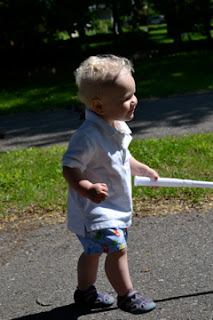 When he sees golf on TV or even when he's swinging his clubs around he says, "swish, swish," imitating the sound of a swing.

Sometimes after his nap when I go in to get him, he's just in there talking to himself, "swish, swish-ing."  Don't they say that good golfers visualize their swing?  Well I'm pretty sure Griff dreams of golf, which would be fine by us....what better sport to be a parent fan of?  Traveling to gorgeous locals, walking 6 miles and enjoying the beautiful scenery?  I just hope I get to be his caddy.