When I started using cloth diapers, my dad started asking questions.  Being an expert in investments, he quickly realized that the parents in each generation since we were little, have started to become more environmentally conscious and have started to really buy in to organic eating.  I remember him asking, "What is the company that makes the cloth diapers?  I want to buy their stock."  Well dad, I was perusing the baby aisles at Target, and cloth diapers on the shelves.  If you haven't invested yet, do it now, because sales could go crazy.  That's not insider trading is it? 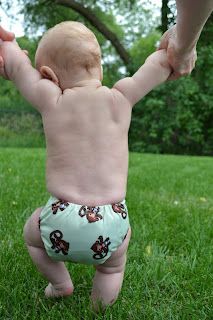 We have officially now been using cloth diapers for 1 year.  I know I've already posted about Griffin's cloth diapers, but I thought since they have recently become even more accessible, as in every Target-going-Mom will be tempted by them on the beautifully decorated end-caps of the baby section, I would update how they're going.

I still love them.  Washing them is no big deal, though Griffin no longer makes nice little plops that roll off into the toilet and now we rely a little bit more on our diaper sprayer which is slightly more work.  They are quite absorbent, Griff rarely leaks during the day.  We still do use a disposable at night because he does leak through a clothie overnight.

I still like having a variety of brands.  Some are slender for his more fitted clothing, some are more absorbent, for naps or when we'll be gone awhile and some are easier to clean poop out of (so we use those in the morning, he's like a swiss watch.  Is that a real saying? Or just another one my dad used when we were little?).  They are all holding up great, the velcro and snaps, the inserts and all in ones.  I've even lost one, there's probably a rotting poop in it somewhere and to whoever finds it, hold your breath!

And to put you in a really good mood, I'll leave you with something hilarious.  Whether you use cloth or disposables, or even if you've never diapered a child but know what a diaper is, you will laugh your head off at this.....Diaper Diddler from Everybody's Gonna Love Today.