Sometimes I like to count down the days to a vacation.  Other times I like to just let it sneak up and surprise me.  But, with an airplane ride with an almost 1 year old looming, this vacation was a mix of both.  Part of me just wanted the plane ride to be over, and the anxiety was building.  Another part of me knew that once we're airborne, there's not much we can do about it and we would just have to live with whatever Griff threw at us.

We left early Sunday morning, my mom, Griffin and I.  I knew going into the trip that despite my best efforts to be efficiently packed, I would be over packed.  And I was.  But traveling with my mom brings a whole new meaning to the term packing.  I packed one big suitcase with Griffin and my clothes, a large boat bag full of toys, snacks, nuks, and other distractions, and my purse.  I also checked the car seat, and used the stroller to navigate through the airport and then checked it on the Jetway.  I had a lot of stuff, but once I got the car seat and big bag checked, it was manageable.  The Minneapolis Airport even has a convenient line through security just for people traveling with small children (and/or mothers who have packed thought of everything).  Brilliant. 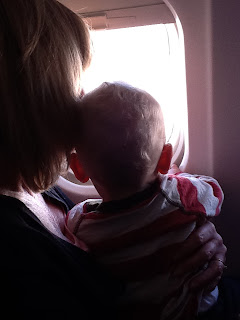 You should have seen us.  I wish I wasn't so frazzled that I had actually gotten a picture of us.  Especially going through security when we had to strip down, have my milk tested, try to disassemble the stroller, and somehow get everything else through the x-ray belt.  In addition to the "regular" amount of allowable bags, my mom also carried on her back a baby carrier (no baby in tow) and two crib rail protectors for the crib down in Georgia.  Which, by the way, neither plane ride made a big deal about her carrying on.  One flight attendant did comment that he thought "that lady that brought these curtain rods left them here!" when almost everyone (except us) had deplaned. 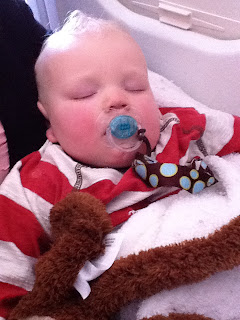 But, with all that stuff, we were determined to keep Griffin occupied.  The hottest items (despite bags of toys) were books, the ipad, and food.  Those squeezable baby foods were awesome for takeoff and landing.  He didn't seem to have any problem with his ears popping.  On the way down he did sleep a little, but I think mostly because he had come down with a bit of a cold and was just tuckered from it.

The Atlanta Airport and switching planes was the most eventful part of the trip.  Griffin, who usually wears cloth diapers, was in disposables for convenience of traveling.  I don't know who designed disposable diapers, but the back of the diaper seems to be a launching pad to send poop right up the back.  And it did.  In the airport.  Thankfully an airport changing table and an extra set of clothes later, we were back in business. 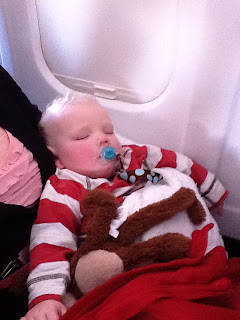 Getting to Savannah was a relief.  We got our rental car, Melvin the nice Savannah airport worker kept Griffin rolling with laughter while we loaded the rental car and installed the car seat.  And in about 30 minutes we were finally there.  Griffin was such a trooper and there is no way I could have done it without my mom.  If you want to hear about the plane ride home, just re-read the above, insert Nate's name where you see my mom and take out the extra baggage and sleeping done by Griffin.  We did it.  First plane ride.  Can't wait for the next one.
Posted by Lesley at Tuesday, March 27, 2012