I promise I do not let my child play with or eat mud, though the following pictures look that way.....

Teething biscuits.  To the person who invented these messy little treats: From what planet did you come, where those who were teething could actually handle these biscuits without making a complete mess of the entire kitchen and surrounding area? 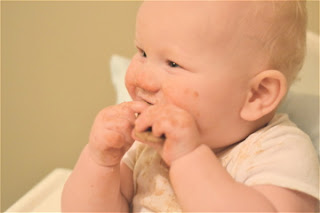 It was a blast and utterly hilarious watching Griffin tackle these.  What a sensory experience.  It was like a baby science experiment.  What is this thing?  What happens if I suck on it and then wipe it on my shirt?  How about my hair, what happens when I put it in my hair? 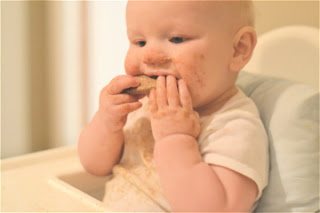 I love how if you look closely you can see evidence that Cooper is in fact sitting right beneath Griffin's high chair.  Can't see it yet?  Look at Griffin's right hand.....Cooper hairs. 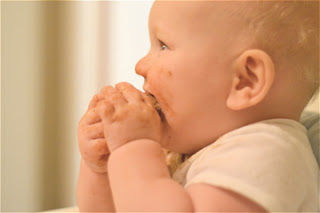 The biscuits smelled like maple syrup (made with molasses) and he smelled like it for days, and he gets a bath daily, because his finger nails look like he works outside and he loves bathies.  A few days later I actually started to think he had Maple Syrup Urine Disease.  Yes, it's real, I remembered it from undergrad and yes, I asked my friend Katy to smell him to see if she could smell the maple syrup.  She couldn't and I know, I'm a little neurotic. 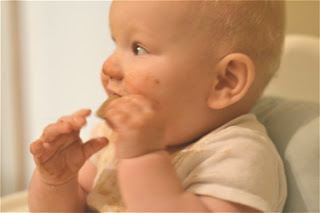 It might be awhile before we venture back to the teething biscuits, teething doesn't seem to bother him that much.  Griffin sure had a blast sogging up some biscuits, and even though he looked ridiculous, he was still pretty darn cute. 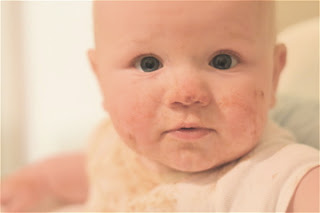