This is the toy box Griffin's Grandpa Rob gave him for Christmas this year.  It is an amazing piece of furniture, hand-made and built to withstand more than it will endure throughout its duties as a baby/toddler/kid toy box.  The toy box is Grandpa's self-proclaimed best wood work piece yet (which is debatable, the bassinet is pretty amazing too). 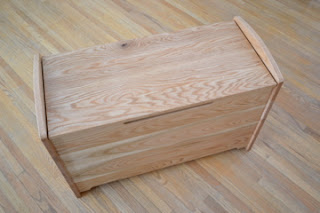 Once opened, you can see how much this toy box can hold!  It also has a sliding shelf which is perfect for Griffin right now as he can't quite reach the toys in the bottom of the toy box.  I'm thinking of storing his nuks in the sliding shelf, since he knows how to open the lid and then they would be at least slightly shielded from Cooper hair. 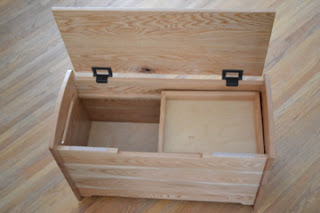 He even used an organic finish which I am very thankful for....Griffin has already started to test his lower two teeth on the lid when he opens it. 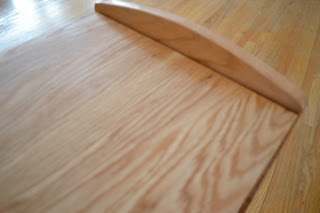 Grandpa also installed state of the art hinges that stay open so that little fingers won't get slammed in the toy box-how thoughtful! 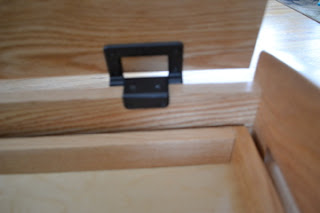 We absolutely LOVE the new toy box and it has become a favorite spot for Griffin to practice his cruising along furniture (pretty sure he'll be walking by summer...crazy).  But what we love even more is that it was made especially for Griffin by his Grandpa!  I want to figure out a way to carve Griffin's name into it, and then add the names of any other children who use the toy box and bassinet.  Then as it is passed own throughout the generations, we will always know when it was made and who else has used it! 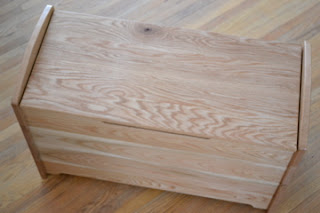