I realize that is an oxymoron.  My mom recently lost a vintage Christmas pin that was her mother's.  Somewhere between Kinkos and Best Buy, the pink bottle-brush wreath pin went missing.  She called me, bummed that a pin she had worn for so many Christmas seasons, was gone.

I said, well, we could try to recreate it?  She replied, "Next year."

Well, since our stockings were hung, and our shopping was done, I decided to go on a little hunt of my own to recreate the vintage pin.  If any of you know my mom, she would have done the same for me, except rather than making a new one she would have found an exact replica, in Connecticut (or something), owned by a woman named Lesley, or at least by someone who had my same birthday.

I wish I had a picture of her wearing the original.  I tried to get enough information from her about the details of the pin, but I only had a vague picture of it in my mind.  I remembered the approximate size (she usually wears it on the lapel of her long black winter coat), and I remember the color (cuter-than-pepto-bismol-pink).  But I guessed there was a bow and even some little ornaments on it.

So off I went, to my good friend w.w.w.  Apparently bottle-brush (as in bottle-brush Christmas trees) is not an easy craft supply to come by these days.  I found it online at some test tube supply companies, but didn't want to wait to order it.  A few other bloggers said they had luck at Target (with a dryer vent cleaner).  Off I went, but no such luck.  To JoAnn Fabrics....nothing.  Back home to regroup.  Craigslist led me to a woman in White Bear Lake who had a few bottle brush wreaths that I figured could just undergo a quick spray paint and some other touch ups.  But with the holidays, it was going to be too tough to meet and probably wasn't worth her time for a $2.00 pin.

Finally, though Michael's and JoAnn's typically have a lot of similar inventory, I decided to stop up there.  They also did not have bottle-brush, but they did have something I thought could work....giant pipe-cleaners!  And the best part?  One giant pipe-cleaner is only $0.99!

So here is what I started with:
-giant white pipe cleaner
-light pink spray paint
-a glue gun
-string of pearl beads to use as ornaments
-white ribbon for the bow
-pin to fasten to the back of the wreath 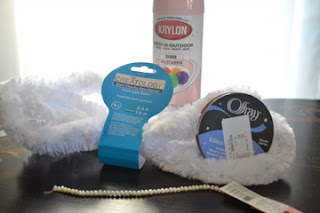 First I cut a piece of the pipe cleaner and dangled it from a hanger and sprayed it pink.  I had to spray on three coats, and actually with more coats it looked more and more bottle-brush and less pipe-cleaner.

Then I curled it into the shape of a wreath and decided to grab this: 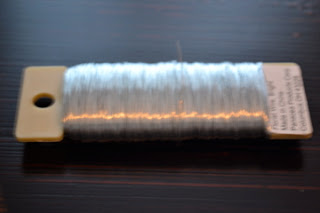 This helped fasten the two ends of the wreath together.  Then it was just a bunch of hot gluing!  Glued the pin to the back, the bow to the front, as well as a bunch of the little pearls to look like little ornaments.


Here is the final product, though it was hard to capture. 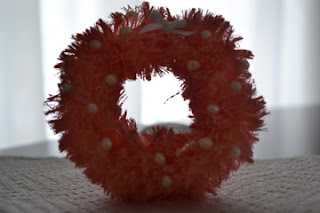 This gives the best look at the final color.... 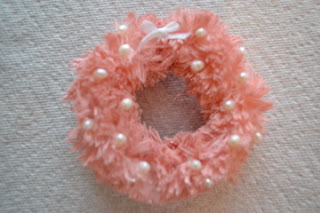 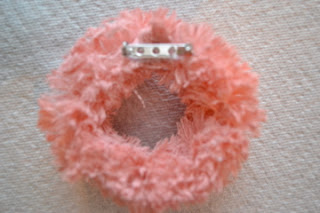 A good look at color and detail....you can't really tell it's not bottle brush! 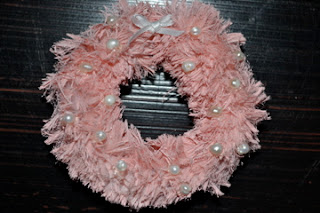 The only thing is that it kind of smells like paint.  I'm thinking that with time it will get better.  I also want to try Odor Neutral on it.

It is not perfect, and although it certainly doesn't compare to the original, it is a decent stand-in until the Kinkos lost and found comes up with the original (fingers crossed!).  My mom loved it and we might try to make another one now that I have her input on things like size of the bow and colors of the ornaments.  She did wear it and from afar you can't really tell the difference and my mom loves it because I made it (she's sentimental like that--but hey, I guess I am too!).
Posted by Lesley at Friday, December 30, 2011