I know I'm completely biased, but isn't he handsome?  Before Griffin was born, a frequent topic of conversation between Nate and me was how will Cooper react to having a baby around?  Cooper was pretty spoiled before Griffin, and to be honest, he still is pretty spoiled, though he does not get quite as much attention, especially in the form of exercise (which is by far his favorite thing to do-crazy I know). 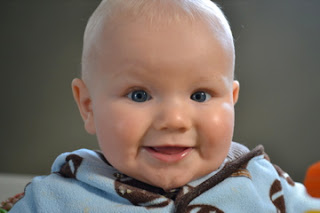 Rewind a few (7 months) and here is my sweet little baby Griffin, still all wrinkly and newborn-ish.  We tried to force a meet-greet-fall-in-love between Griffin and Cooper, and while Cooper was content sitting with Griffin for a few minutes, he was not quite loving this little thing that squirmed, cried and took away precious frisbee time. 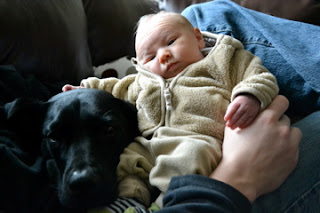 Cooper is a snuggler.  Not too many dogs this big love to cuddle up on your lap, or on their backs on your lap, but Cooper does.  He makes his way to our bed about 5:00 am for his morning snuggle.  He was trying it out on Griffin, but wasn't too sure if Griff was going to be a good snuggle-buddy. 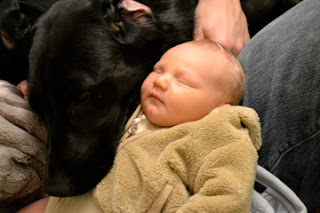 Cooper did decide that if Nate was nearby, it was ok to snuggle the both of them. 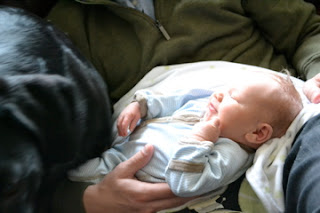 Cooper also decided that during his post-frisbee cool down, it was ok for Griffin to chill next to him. 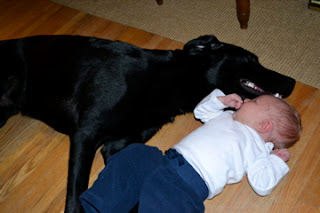 He even nuzzled his head up to Griffin, or tried to wipe his drool on him, we're not exactly sure. 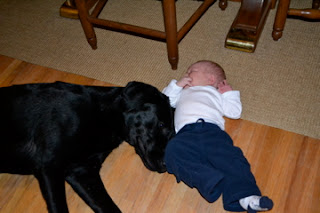 Fast forward a few more months and Griffin actually got very interested in Cooper.  He does not know the word "gentle" yet, but Cooper has a pretty high pain tolerance (we know this from broken teeth on frisbees). 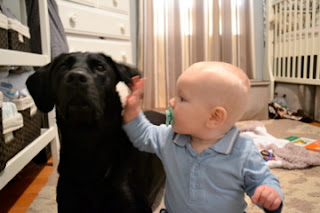 Cooper even goes to where Griffin is sitting now, and will plop himself down right next to him, usually between Griffin and me so that he gets first dibs on belly scratches. 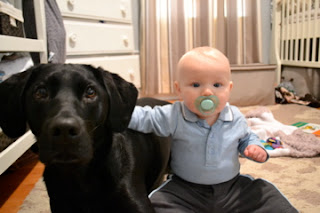 Not only does Cooper go sit by Griffin, but he has learned that Griffin will play with him.  So Cooper brings his toys right to Griffin.  Griffin doesn't care how much slobber or dirt is on Cooper's toys, he still thinks their his and tries to put them in his mouth.  It is now my constant job when they are playing together to be the toy-in-the-mouth police. 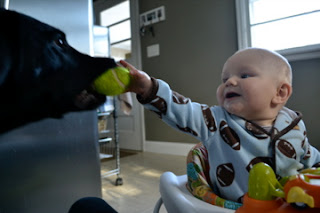 They look guilty, like they've been up to no good.  Griffin probably has tennis-ball-breath.  Gross. 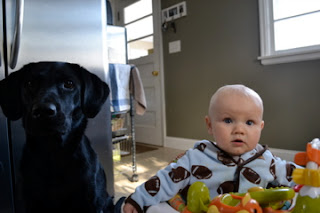 I love that they are slowly but surely becoming buddies.  Cooper's other favorite time of day is meal time and he has a lot to clean up under Griff's high chair.  Now if Griffin could learn to throw a frisbee, he would win Cooper's heart for life. 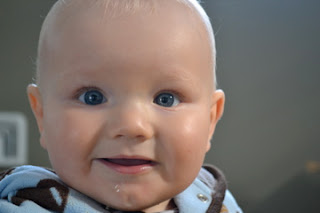 How could that face not win your heart?
Posted by Lesley at Thursday, December 01, 2011