A few weekends before Halloween we took advantage of the unseasonably warm weather this fall in Minnesota and went to pick pumpkins and apples at Minnetonka Orchards.  I have to admit, I had gotten a groupon for the occasion which was the good news and the bad news.  The good news: we got admission and lunch for $13!  The bad news: so did every other family in the Twin Cities.
It was quite crowded, but all the more people watching for Griffin to do!  It was at least 65 degrees and sunny, it felt like the State Fair.  We brought Griffin in his stroller, but on second thought, we would rather have had him in the Bjorn, there were lots of hills and people to maneuver around.
First we ate lunch.  They had a great cookout all set up, so we got our food and had a little picnic on the grass.  Griffin loves to watch people (especially kids), and there were so many kids playing!  There was a playground, train rides around the pumpkin patch and hayrides.
After lunch we gave the corn maze a try.  We really could have used Griffin's help because Nate and I kept ending up in dead ends.  Thankfully there were some big kids in the maze that could help us out, literally. 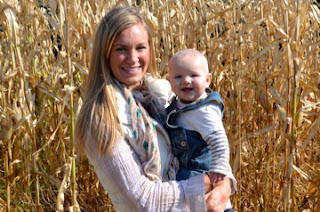 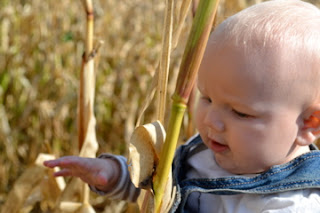 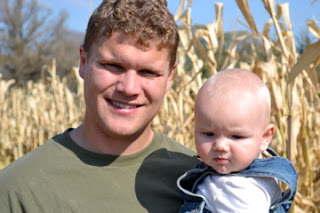 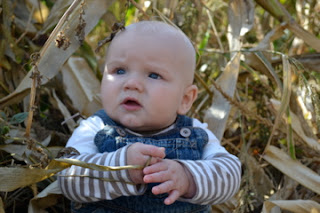 Then we headed out to the orchard, and due to time constraints and carrying capacity, we didn't get any apples, but Griffin is already excited to go on a hayride through the orchard next year.
Finally, we went to the pumpkin patch where we picked out 3 pumpkins, one for each of us.  We took them home and got them set up on our front step, but before we could get to carving them, a squirrel ate them for dinner instead.  Cooper is just glad we're not feeding the bunnies (his nemesis).
Squirrels, feast your eyes on this!  Griffin's first pumpkin:) 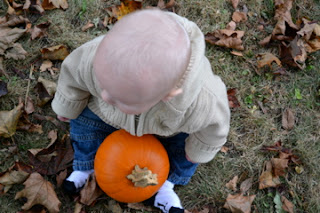 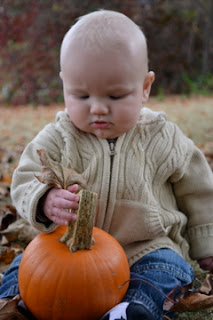 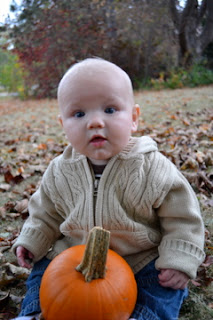