We have officially taken a vacation since Griffin was born!  It was both an amazing vacation and incredibly gut-wrenching to be away from Griffin for 5 days.  Nate and I have a high school friend whose fiance was from California so they decided to get married in Carmel, CA this October.  Back in June we were a little hesitant to pull the trigger and book tickets for October not knowing what Griffin would be like to leave with my parents as a 6 month old.  All signs were pointing to Griffin being an incredibly easy-going, predictable, happy little boy, but who knows-a lot can happen in baby world in the span of 6 months.
To be clear, our first time away from Griffin was two weeks prior to going to California.  We went to Chicago for my cousin Charlie and Jaisa's wedding, but it was so quick-in on Friday afternoon, out Sunday morning, that it barely felt like we left!
My dad and step-mom took Griffin while we were in Chicago and it was great!  I wrote a novel on the ins and outs of Griffin's schedule and gear, probably way more information than anyone would need to know (I wouldn't have blamed them if they never even finished reading it!), but better to have too much information than not enough:).  The best call I got was when my dad re-capped the first day and explained how Griffin had done exactly what he was supposed to do, when he was supposed to do it (literally, I said he'd wake up from his nap at 3 pm and at 3:01 he woke up, I said he'd go to bed at 7:15pm and he was asleep at 7:15pm, I said he'd wake up at 7, he got up at 7:30).  WOW.  Griffin is a trooper, and thanks to my dad and Sig for taking such great care of him and making it so seamless
for him to have a weekend away.
My mom and step dad obviously wanted a turn at having some overnights with Griffin so they kindly volunteered to take him should we decide to go to Cali, which we did, so they were on deck for a long weekend with Griffin.  They rocked it too-he was himself, Mr. Predictable, Mr. Happy and Mr. Easy Going.  They had so much fun with him, taking him for walks in the Vintage baby buggy (circa 1984), going to the apple orchard, lots of playtime with the dogs and of course his favorite, bathies.  Suffice it to say, Griffin was well taken care of for our almost back to back weekends of being out of town.  We are so blessed to have such wonderful grandparents who take such great care of Griffin, it made it so much easier for us to get away and help our friends celebrate their weddings!
Now that we have covered the Griffin situation, a little bit about Carmel.  Carmel is one of the sweetest little towns I have ever been to, and it is amazingly picturesque to boot.  Nate and I traveled with 3 other couples who are friends of ours from high school.  We arrived late Wednesday night and ate at cute Mediterranean Bistro called Demetra Cafe-the food was delicious, especially for ravenous mid-westerners adjusting to the new time zone.  We hit the hay fairly early to get a good start on Carmel the next morning.
Thursday morning we split up boys and girls, the boys went golfing at Bayonet in Monterey and the girls went on a whale watching cruise with a little hesitation.  We'd had a last minute change of heart earlier in the week and canceled our whale watch in favor of spending more time in Carmel walking around and taking it in, but upon arrival to our hotel, the bridal party convinced us to hop back on the whale-watching wagon. 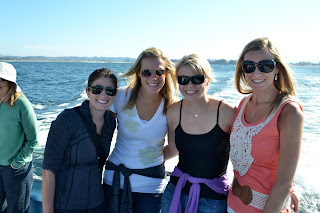 It was nice to get out on the Pacific Ocean, though we did not see too many whales, at least not that close up.  We did see some dolphins and jellyfish!  The whale watching trip left many of the passengers seasick so we were grateful to get back to the dock and  back to quaint Carmel.
After getting back from whale watching, we quickly got ready and headed to the clubhouse at the Links at Spanish Bay, one of the courses that is a part of the Pebble Beach Resorts.  Each night at sunset, a bagpiper follows the final group up the 18th back to the clubhouse.  We sat outside reveling in the phenomenal views of the sunset and the golf course we had tee times to play the following morning. 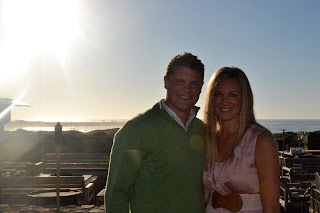 After leaving Spanish Bay, we went to dinner at Casanova in downtown Carmel.  It was fabulous.  It was a set menu but we had some choices, and it had great ambiance-we barely noticed we were outside and the roof was merely a tent!  We started with an antipasto, and then for our second course we tried the house cured prosciutto, the spinach gnocchi (AMAZING), the caprese, and oysters.  Entrees we ordered were, veal oso buco, scallops, cannelloni, lamb chops and sea bass.  All were great, my favorite was the sea bass, and I tend to not prefer seafood, so that's saying a lot.  We went to a dessert reception for Brett and Leslie (the happy couple) at Forge in the Forest a few doors down from our dinner, which was another charming spot, with an adorable courtyard which hosted the dessert reception.
Friday morning we had tee times at the Links at Spanish Bay at 8:45 and 9:00.  The boys thought it necessary to get there by 7:30, so we had plenty of time to take it all in and get ready for our round.  In fact on a scale of 1-10 for how pumped we were for golf, Judd claimed a 14.
The course was incredibly picturesque, similar to Pebble, but almost every hole was on the water.  It was a tough course, there is a lot of natural landscape which is OB and even the rough that is technically playable is very difficult to navigate.  Bottom line is you have to be in the fairway.  The greens were tricky with lots of movement, but they weren't overly fast and putted pretty true.  I wish I could reminisce hole-by-hole, oh wait I can at their website (and without losing too many balls!). 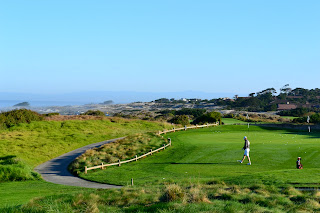 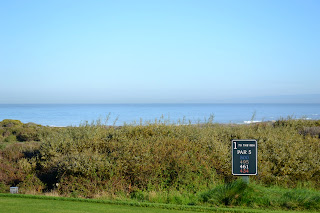 Golf was memorable (not our scores), but the experience.  It was pricey but it was worth it, an incredibly scenic, challenging round.  After hitting a bad shot, all you had to do was look up and admire God's beautiful creation and suddenly the scorecard doesn't matter (that's what I keep telling myself anyway).  Wow.
After golf, we had to hustle back and get ready for the Friday night wedding at Chateau Julien Wine Estate in Carmel Valley.  Another fabulous venue, and dare I say, picturesque?  The wedding was outside in the middle of the vineyard and the reception was in the room where they store the wine barrels-so cool.  It was a great ceremony and reception, and of course great way for Brett and Leslie to celebrate the beginning of their marriage together! 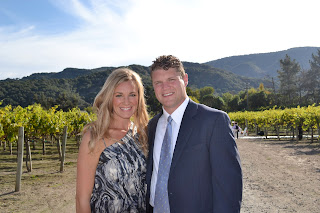 Saturday morning we were up and at it again, grabbed a quick breakfast at our new favorite breakfast cafe in Carmel, grabbed some breakfast sandwiches, pastries, coffee, water and we were headed on a road trip to Big Sur.  We drove about 35 miles south of Carmel down California Highway 1, which was probably the most beautiful 35 miles I've ever spent in a car.
Our first hike was to the McWay Waterfall.  It was beautiful, but seemed very "built for tourists."  The falls were cool but far away and the hike was pretty short and easy.  We took some pics and then headed back to our car for our next trail. 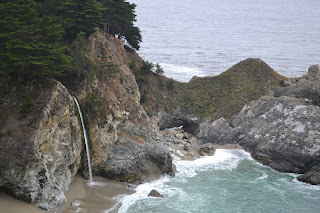 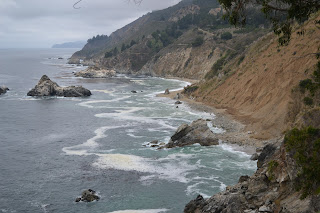 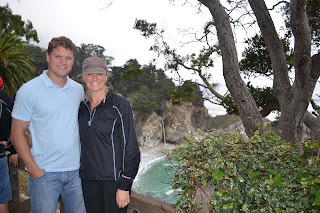 McWay Falls was as far south as we went, so we headed north, back toward Carmel and stopped to try Partington Cove Trail.  There were a few different trails within the trail.
This one along a creek up into the mountain.... 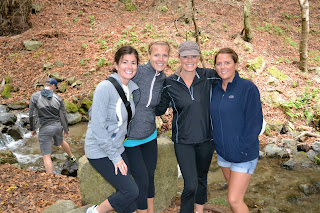 This one through the tunnel... 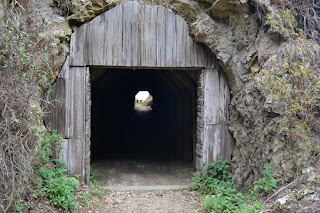 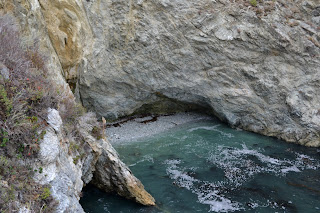 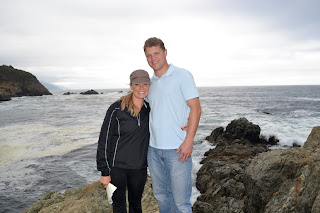 After hiking around for awhile, we worked up an appetite and headed north a few miles to a restaurant that came highly recommended by my sister-in-law Elissa, called Nepenthe.  Basically it is a restaurant built into the cliffs and it looks straight out over Big Sur and the Pacific Ocean. 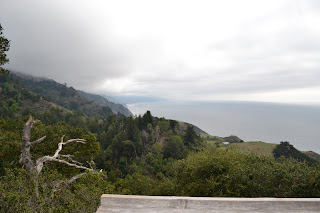 After our hike we headed back to Carmel, and some of us headed to Pebble Beach to walk 17 and 18 and check out the Pro Shop.  It is exactly as it looks on TV, but more intimidating.  Especially when you feel how strong the wind is and you look from the tee box on 17 straight into the water.  Someday....
Oh, and I forgot to mention, the greens are TEEENY!  I'd have better luck (insert impossible task).  Pebble is Bucket List activity....to much cha-ching to fork over at this stage in our life....in addition to Griffin's college savings we should start one for playing Pebble.
We headed back to the hotel for quick showers and then headed to the beach in downtown Carmel (by-the-sea is the technical name).  We did make a pit-stop on the way to a late recommendation we got to go to Clint Eastwood's restaurant called the Mission.  It is a little ranch style property, complete with sheep!  They don't take reservations so we didn't chance it, but we heard they have fabulous live piano music! 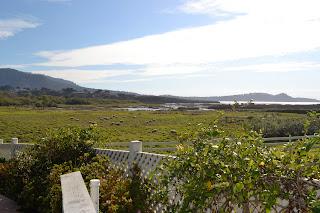 I need to taken an English class and learn new adjectives whose synonyms are picturesque, beautiful, gorgeous.  I guess I'll just let the picture speak for itself.  Here is Carmel-By-The-Sea.  So in addition to being an incredibly charming, quaint, artsy town, it's on the ocean! 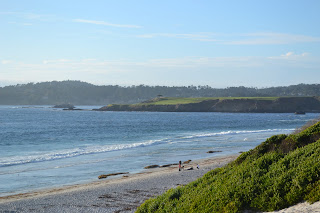 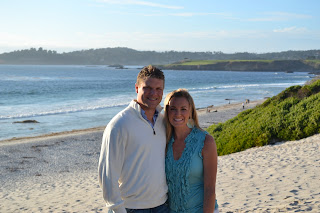 We walked just up the street from the beach to Portabella where we ate dinner on Saturday night.  The food was great, I think there were a total of 10 tables, more than any other place we had seen!  We again had several tasty dishes, scallops, lobster, filet mignon and payaya. 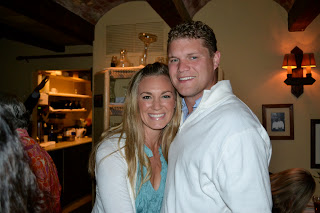 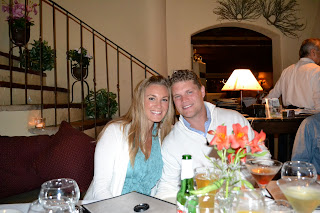 Though I have to say the highlight was dessert (from our favorite breakfast spot).  Rachel realized it was almost 10pm and the ice cream shop closed at 10.  So she left Portabella, ran to get ice cream, and brought it back to our dinner.  It was such a hit, she ran back and got two more bowls-Coffee ice cream with cookies swirled in.  AH-MA-ZING. 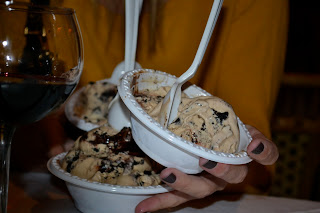 The trip was fabulous, great memories with great people in great places.  Once we were headed back to MN I couldn't wait to see Griffin, it made traveling difficult, that antsy feeling you just can't shake.  When we finally got to see him, he was just as perfect as I remembered and I fell in love with him all over again.  While I wouldn't want to take a vacation from him frequently, it was the best vacation Nate and I could have imagined for ourselves and for Griffin.  My mom even told us as we called her on our way to the San Jose airport, "You can stay a few more days if you want and we'll just keep Griffin."